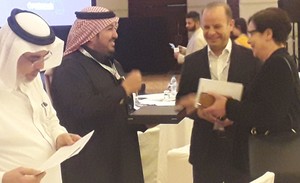 “My margins are 28 percent for the media business,” said Anthony Tan, Deputy Chief Executive Officer of Singapore Press Holdings Ltd, “which is decent – except that they used to be 50 percent.”

Tan’s response has been one of the most far-reaching diversifications in the industry.

“We pride ourselves on being far-sighted, and we started to diversify 20 years ago by buying into a mall.”

The property strategy has paid dividends, and paved the way for some even more lateral diversification into healthcare with the result that half of the company’s profits now come from non-media activities.

“We are a media company,” clarified Tan, “we’re diversifying to sustain the journalism, and we’re still growing healthcare, etc., so that our titles can move forward.”

Those businesses now include wine sales, running events, magazines, and apps as well as a network of partnerships that help the content thrive.

Lateral thinking has seen moves into ticketing and restaurant reservations, as well as deals that help their content thrive like pre-installed apps on new phones and zero cost data for mobile users looking at their media.

It’s an impressive portfolio, but the key to it all is not to make false gods out of any one platform or approach.

“Maybe in three years time I will tell a different story; maybe there will be no property or healthcare. The point is to be nimble and not to chase readers…. but build audiences.”

Back to the future with paper?

That refusal to be wedded to one approach also meant the group was quick not to see itself as purely paper at a time when other publishers were hesitant to experiment outside newsprint. But it also means that SPH has no intention of abandoning paper either as long as there is a market.

“The print newspaper as a format is not something to obsess about, but it is also true that in Singapore there is an ageing population that still wants to buy newspapers.”

Tan’s refusal to either remain wedded to paper nor abandon it outright fitted well with other speakers outlining roadmaps for transformation. Ulbe Jelluma, Managing Director, Print Power Europe talked of a potential tipping point in the advertising industry as large advertisers become more sceptical of the promises of online advertising and re-evaluate their media spending strategies.

Professor Neil Thurman took to the stage and further fanned Print Power’s fire by examining the metrics of reader engagement.

The previous day had seen industry experts renouncing the quest for clicks and reach in favour of true engagement, and now Thurman laid out the argument for Time Spent with the Brand as a better way of judging media impact.

“Is Time Spent with the Brand the new magic metric?” he asked. “Well, it is certainly gaining currency not least as the best predictor of whether readers will notice adverts and publishers such as the Financial Times believe it will benefit them since it values real reader engagement over clicks.”

Thurman then went on to demonstrate that newspapers are key to time spent with the brand, helped in no small part by the UK’s Independent and its decision to abandon print.

The idea that large advertisers such as Proctor and Gamble, as well as agency leaders such as WPP’s Martin Sorrell are reconsidering digital spend and rethinking print does not mean that paper is going to turn back time.

Quality of engagement over quantity of users

What did emerge as the common ground between the champions of both print and pure play digital was that the goal is not numbers but quality of engagement.

That was also the point made by Niko Ruokosuo, CEO of Nebras Films who shared his “learnings from Hollywood” with us and observed that no studio looking to get audiences to pay to spend time with their media would ever do so without a deep consideration of the emotional side – whereas most news publisher seem to shy away from the issue of emotional connection with their audience.

One facet of the complex relationship between news publishers and the public is the thorny issue of trust and fake news.

The possibilities of Artificial Intelligence in the newsroom were demonstrated in almost Jekyll and Hyde style as AI guru Parankusha S dangled the promise of automated fact-checking within a breath of demonstrating computer generated (and thus fake) video of human speeches.

Certainly Silje Sjursen Skiphamn, Senior fact checker, at Faktisk.no didn’t look like she was worried her job was about to disappear.

Whether AI proves to be friend or foe remains to be seen. What matters, as Anthony Tan pointed out, is not to rule anything out as we look to build audiences.

Snehasis Roy: ‘Back to business’ is key priority for Times of India