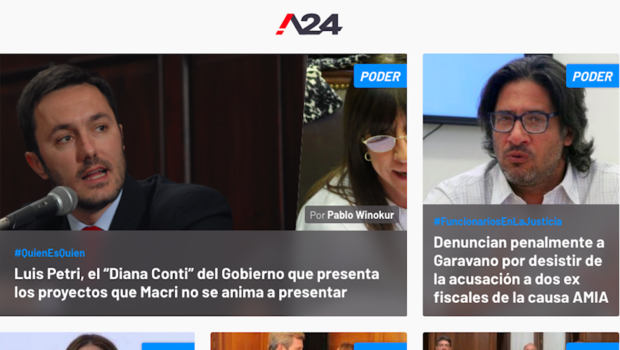 Alejandro Lladó, the group’s Digital Manager, explained that the new site is designed to attract “a 30 year old very informed public of professionals in Argentina with responsibilities in important companies.”

The backbone of this project is to respond to this audience’s information needs and generate a discussion about the most relevant issues in the country, as they currently do through the group’s different media brands, including the TV channel A24. However, this is an autonomous site operated by an independent team, whose content will be original and will not replicate the one on broadcast.

A24.com seeks to stand out from Grupo América’s other digital sites such as PrimiciasYa (entertainment and celebrity) and UNO (news for millennials), by covering hard news and addressing more traditional topics, “those which are known as ‘the red circle’ in Argentina”: politics, justice, economics, sports and life stories under an innovative model but this time without a millennial approach.

The decision to launch the project was made in order to introduce Grupo América among Argentina’s strongest digital media sites.

Despite the fact that the supply of digital news in Argentina is quite large (Clarín, La Nación, Infobae, Big Bang News, etc.), Lladó states that A24.com will kick off strong thanks to the fact that the public is already familiar with the A24 TV brand and due to a series of initiatives that will differentiate the site in terms of quality content, such as breaking with the traditional way of writing news based on the inverted pyramid technique and instead replacing it with more explanatory texts, adapted to the questions standard readers make to themselves.

In addition, they have invested in a user-friendly operating site with quick navigation through React technology, enhancing the user’s permanence on the site. As to content, Lladó comments:

“We believe that there is still a chance to go and find public that already reads this type of news as well as new users. Our bet is to differentiate ourselves in the way we write the notes (nimbly) and how we explain them to the user.”

Although the digital platform was launched just recently in March 2018, the project has been alive for longer, as they began by building audiences on their social networks such as Facebook, Twitter and Instagram, which “are an important player in the digital world, but not the end goal,” according to Lladó.

On the other hand, Grupo América has implemented a newsletter system, including one for sports (Agenda de Deportes), one for justice (Dos Justicias), and one for politics (La Jungla). These have built a wide audience for Grupo América, and its subscribers can find easy access to A24.com.

Regarding monetisation, their first strategy will revolve around branded content without the need of being too invasive under a traditional sales model, but by gaining revenue at the same time as they accompany the brands that want to communicate something. However, the user’s needs and experience will always go first.

“The goal will always be to put the users first over everything else and to help them enjoy a great experience on the site. Our added value will be a pleasant experience for the users when consuming our material,” — Alejandro Lladó, Digital Manager, Grupo América

Lladó affirms that during the first year the goal is to make A24.com well known and for the second year to position it alongside the greatest Argentinian digital media websites regarding the most important topics of the country’s agenda. “Our most important metric is to be really relevant and transcendent,” he concludes.