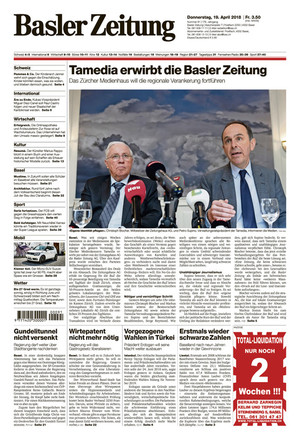 The transactions are subject to the approval of the Swiss Federal Competition Commission.

With the purchase of Basler Zeitung, Tamedia is planning to expand its newspaper portfolio while continuing to pursue its publishing strategy. The company is confident that the incorporation of Basler Zeitung into its network will result in a strong regional editorial office. At the same time, readers will continue to have a newspaper focusing on Basel, one of Switzerland’s largest cities. After the takeover, Markus Somm will remain editor-in-chief of Basler Zeitung for six months, and will join Tamedia as an author after a sabbatical.

During the second quarter of 2018, Zeitungshaus AG, in turn, will take over Tamedia’s 65-percent interest in the Tagblatt der Stadt Zürich AG, which has a circulation of 126,594 copies, according to WEMF. The new owner will continue to operate the Tagblatt with the current editorial team. At the same time, Tamedia is also selling other freesheets to Zeitungshaus AG.

Zeitungshaus AG is co-owned by Swiss right-wing politician and former Federal Councillor Christoph Blocher. Following the announcement of the take-over of Tamedia’s interests in the Tagblatt, Syndicom, a media and communications trade union, expressed concern that Blocher will use Zeitungshaus AG’s growing portfolio of freesheets for propaganda purposes.

“The collaboration of Tamedia with Basler Zeitung concerning the advertising combination Metropool goes back to 1993. Basler Zeitung has deep roots in north-western Switzerland and is a perfect match for our daily newspapers in Bern und Zurich”, says Pietro Supino, Publisher and Chairman of the Board of Directors of Tamedia. “This is why we had to seize this opportunity, even though the sale of the Tagblatt der Stadt Zürich in particular is very difficult for us.”