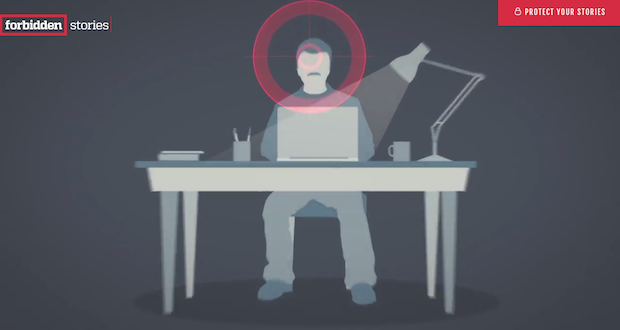 Initiated by non-profit organisation Freedom Voices Network, Forbidden Stories offers journalists under threat a secure way to store data and information related to their reporting, vowing to continue and publish their investigations in the event that they are jailed or killed in connection with their work. Additionally, those involved in the project hope it will aid in removing incentives to hurt journalists.

“I think that most of the time when journalists are killed, they are killed for the information and for the stories they try to publish,” said Laurent Richard, the founder and executive director of Freedom Voices Network.

“So I think it doesn’t make sense for anybody to try and make a bad attempt against one journalist if they know that this journalist has already backed up the story and that it’s already in the hands of 10 or 20 other journalists ready to follow it up if anything happens to the journalist.”

The website of the project features detailed instructions on how to securely send messages and documents, using Signal, SecureDrop or encrypted email, with the promise of keeping backups safe and, if this has been requested, continuing an investigation in case a journalist is no longer able to do so. As to not endanger those currently making use of the service, Richard can’t reveal how many journalists have been in contact or where they are based.

Richard, an investigative journalist himself with nearly two decades of experience, has often found himself in countries with severe restrictions on freedom of the press.

“I was sometimes in the position of the French journalist who can continue the stories local journalists can’t pursue because they’ve been jailed or killed,” he said, explaining where the idea behind Forbidden Stories stems from.

But it was an experience much closer to home that actually put in motion the creation of the project. In 2015, Richard was among the first on the scene after two terrorists assassinated 12 people at French satirical magazine Charlie Hebdo (at the time, Richard worked in an office on the same floor).

“I was among the first people entering the newsroom of Charlie Hebdo, and that was quite a traumatic experience. We were trying to help people who were still alive, and they were journalists like us who had been killed for the same job we were doing,” he said.

“And from that day on, I decided to find the time for creating a platform devoted to that cause, finishing the stories of journalists who have been killed.”

In light of its launch at the end of last October, Forbidden Stories published three short-form videos highlighting the murders of Mexican journalists Miroslava Breach, Javier Valdez, and Cecilio Pineda, and their investigations into corruption and drug cartels that presumably led to their death. Videos of this kind, of which the project’s staff members will continue to produce more, are translated into up to nine languages and published across Forbidden Stories’ own platform and social media channels in order to reach as large an audience as possible.

At the same time, Forbidden Stories is working with news organisations and local partners, with an eye towards producing at least one large collaborative investigation per year.

“I think collaboration really is the best protection, because a story being published, and published broadly, is exactly what the enemies of the press don’t want,” Richard said.

“Collaborative journalism could be a way to defeat censorship, partly, of course, not entirely, because we can send this signal to enemies of the press that even when you try to stop the messenger you’ll never stop the message.”

This very sentiment was echoed in the wake of the murder of Slovakian journalist Ján Kuciak and his wife earlier this year when multiple news outlets across the world published a draft of the last story he worked on, and Axel Springer announced plans to set up a newsroom in Bratislava to continue his investigations.

Kuciak was one of eight journalists to have been killed so far this year, according to figures collated by the Committee to Protect Journalists.