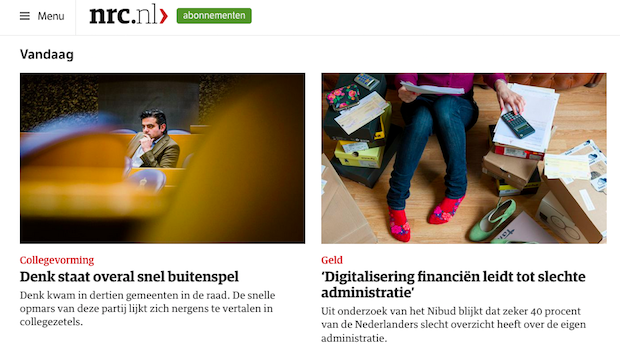 “I think a lot of media organisations thought for a long time that including readers is opening your website to comments, and allowing them to respond to what you did, which meant that readers were at the end of the cycle,” said NRC’s deputy editor-in-chief Stijn Bronzwaer.

“We write the stories and at the end readers can respond to that. Maybe they get an op-ed in the opinion pages or they can leave a comment on the site or they can send an email to a journalist and might get a response. But you have to start with the reader, that is the key.”

Based on this idea, NRC has introduced a variety of initiatives in a bid to build trust, improve transparency, and learn more about its readers.

“We notice more and more that advertising is going down, and subscription is going up. We’re getting more dependent on our readers,” Bronzwaer said, adding that around 75 percent of revenue is generated from subscriptions, with the rest coming from advertising.

“The main thing is that want to know more about our readers. They are our core business, so what can we do to make sure that they stay with us?”

Including readers from the get-go

The audience development team, created almost three years ago and staffed with a handful of people, plays a key part in this endeavour. Every day it kicks off the morning meeting, informing journalists about audience data and presenting them with the 25 top-performing stories (measured in minutes, not clicks).

“We start our meeting every day discussing what our readers appreciated, what they read, and what they didn’t read. I think having this discussion in the newsroom really helps because it motivates our journalists to think about our readers when they write stories,” he said.

“What we also noticed here is that the stories our journalists are proud of are always the stories that are being read really well. It’s big news stories, original reporting, researched journalism that our readers come to our site for.”

Another task carried out by the audience development team centres around including readers in the reporting and soliciting input from them. For example, for a story about the influence of the #MeToo movement on sexual morality in the country, NRC distributed a reader survey via Twitter, Facebook, its newsletter and Whatsapp service, and received and included feedback from more than 2,000 readers.

“Including the readers is a necessity. We need the readers, they can help us in our reporting, they make our reporting better. They’re also our customers, we have to listen to them,” Bronzwaer said.

Connecting with audiences in a more meaningful way

While it’s common for journalists to interact with readers via social media, NRC is taking a more unusual approach, having launched an initiative that sees a group of journalists take part in phone calls with readers every two months.

“It’s a really small thing but it’s very insightful for our journalists because it allows them to really learn who the people they write for are. And for the readers it’s great to be able to speak to somebody from the newsroom.”

NRC also launched a podcast, called Haagse Zaken (which roughly translates to Business in The Hague), to inform readers about the goings-on in Dutch politics. As each episode is around 40 minutes long, journalists can dive deep into a topic, while building their profile and establishing a more meaningful relationship with the audience.

“We think that it’s really helpful in building a brand, the profile of journalists, and the trust in those journalists,” Bronzwaer said.

“If you listen to the podcast you get the feeling that you’re really getting to know the journalists, you know their voice, how they work, how much work goes into this, how many people they know. And I’m convinced that when you then read stories from one of those journalists you think ‘ok, it’s this person, he or she knows what they’re doing’.”

Improving the transparency of the reporting process

Building on this idea, NRC also aims to increase transparency around its reporting process. The organisation has started to include “About this article” boxes in stories to share behind-the-scenes insights, such as the number of people that have been interviewed for a story, why certain sources were kept anonymous, what kind of documents the journalists reviewed, or how long they worked on the story.

“This way, the reader knows how much work goes into a story, and I think that really helps to build trust as well. We’ve been doing it more and more because we noticed that readers really appreciate that.”