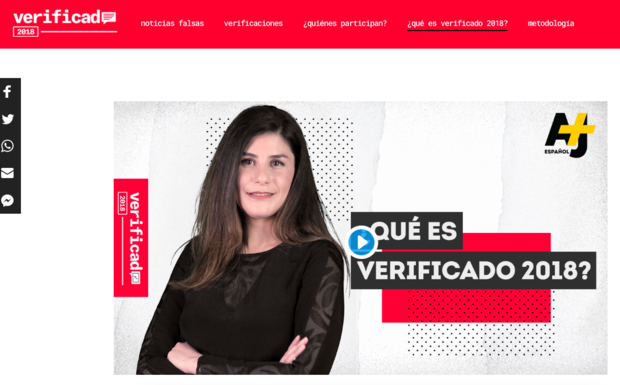 It is the mechanism of democracies to monitor those who govern, to hold them accountable, to inform societies about the abuses of power. To this role of “checks and balances” we can also add the media’s role of giving citizens the tools and information to decide freely and consciously for their better future.

Verificado 2018, an unprecedented journalistic effort, emerges in Mexico under these premises and facing one of the most complex electoral scenarios in years. @VerificadoMX is a fact-checking platform that aims to combat disinformation and fake news during the country’s presidential campaign and election, set for 1 July. The means to achieve it? Collaborative journalism.

Verificado 2018 is an initiative created by AJ+ in Spanish*, who created a coalition with Pop-Up Newsroom and afterwards invited Animal Político, a Mexican digital media outlet that occupies one of the top places of El Economista’s Digital Native Media Ranking.

Beside AJ+ in Spanish (responsible for visual journalism within the project), Pop-Up Newsroom and Animal Político, Newsweek in Spanish, the nonprofit Mexicans Against Corruption and Impunity (Mexicanos Contra la Corrupción y la Impunidad), and the University of Communication (Universidad de la Comunicación) are the other key players in this initiative.

Since the beginning of March, journalists from the 60 groups and institutions have received training in techniques of fact-checking, digital design and the production of visual content.

The idea behind the project is to help readers identify which information is true and which is false in the context of the presidential election.

The example of countries such as the United States, where the proliferation of fake news was a decisive factor in the results of the 2016 elections, shows the power that misinformation can have when it comes to influencing citizens’ decisions.

The work of Verificado 2018 is centered on detecting potential fake news on social media, verifying it and publishing fact-checked information.

The project also aims to attack misinformation within WhatsApp groups by offering the audience truthful data. Any user can send material to Verificado 2018 through the hashtag #QuieroQueVerifique on Twitter and Facebook or through the WhatsApp line.

The newsroom is located at the University of Communication, in Mexico City. It functions as a news agency that delivers the verified contents to the allies so that they can broadcast them through their own media. That way, the verified information will reach more people, especially due to the amount of followers each of the 60 allies has.

In addition, thanks to the intensive training of reporters, the members of this initiative can make their own verifications. When one outlet is working on a verification, all the others will be notified in real time, and there will be no need to duplicate efforts.

Verificado 2018 joins other initiatives of collaborative journalism, such as Electionland (of ProPublica) and CrossCheck (of First Draft News), where American media and reporters worked together to fact-check and cover electoral problems in the country.

It is worth mentioning that, while these broad journalistic collaborations are new in Mexico, worldwide there have been works whose social impact has been enormous. Such is the case of the Panama Papers or Paradise Papers investigations carried out by the International Consortium of Investigative Journalists (ICIJ), where hundreds of journalists investigate leaks from offshore entities worldwide.

The project is ambitious and unusual in the Mexican media industry. It will be necessary to observe how it will develop in the coming months, how active the members of the initiative are in stopping the diffusion of false news and how effective they are in doing so.

Another important aspect will be to analyze what remains of the project once the elections come to an end.

Will the initiative lay the foundations for this collaborative methodology to multiply in more newsrooms, both digital and traditional? Will this establish a systematic and permanent tool of news verification common to a large number of Mexican media?

As noted by Tom Trewinnard, co-founder of Pop-Up News, in his editorial from 12 March in Newsweek in Spanish, “the challenge is great, but if we work together we can play the important and ancestral role of journalism in the democratic process: inform the public and hold the powerful accountable.”

The original post in Spanish can be found here.

*Correction: This article was modified on May 3, 2018 due to an error that indicated that Animal Politico was the outlet in charge of launching the initiative Verificado 2018.