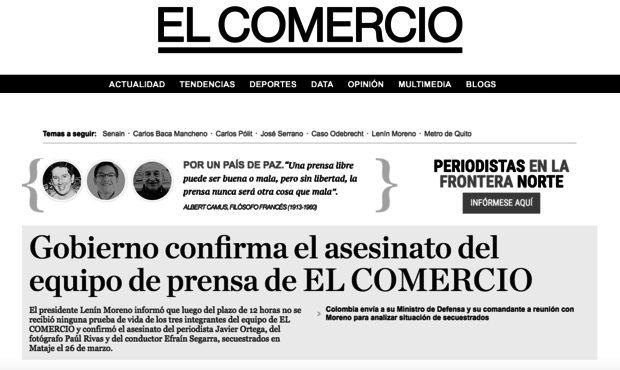 Ecuadorian President Lenin Moreno confirmed today the murder of three El Comercio staff, kidnapped on March 26 on the border between Ecuador and Colombia by dissidents of the Revolutionary Armed Forces of Colombia (FARC), said to belong to the breakaway ‘Oliver Sinisterra’ front. The news comes a day after the president issued a 12-hour ultimatum to receive proof of life for the three captives, 17 days after the kidnapping took place.

“The irreparable loss of our colleagues is extremely painful. They gave everything doing their jobs. Today we have to demand on their behalf that governments grant us all the necessary guarantees to practice journalism,” said César Pérez Barriga, Deputy Director of newspaper El Universo and a member of the board of WAN-IFRA. “A country misinformed due to narco-terrorism mortgages its future as a society.”

Speaking after his early return from Peru where he had been due to attend this weekend’s Summit of the Americas, President Moreno announced that the government would be seeking the capture of Walter Arisala Vernaza, known as ‘El Guacho’, the leader of the criminal organization widely believed to be responsible for the abduction and murder of the three media professionals. He called for national unity and said that action taken by the government to resolve the case would be made public.

“It is the responsibility of the state to guarantee the exercise of freedom of expression in its territory,” said WAN-IFRA CEO, Vincent Peyrègne. “In this tragic case, everything seems to indicate that the governments of both Ecuador and Colombia have failed in this responsibility.”

The tragedy will deeply effect the media profession in Ecuador, where the murder of journalists has been, until now, extremely rare. WAN-IFRA expresses its condolences to the relatives of the three professionals who lost their lives in the exercise of their jobs, and offers its solidarity to the journalism community in Ecuador.

WAN-IFRA is the World Association of Newspapers and News Publishers representing more than 18,000 publications, 15,000 web pages and more than 3,000 companies in more than 120 countries. With offices in Paris, France, and Frankfurt, Germany, and with subsidiaries in Singapore, India, and Mexico City, WAN-IFRA is the official representative of the international news publishing community at the United Nations, UNESCO, and the Council of Europe. Its main mission is to defend and promote press freedom, quality journalism and editorial integrity, while also promoting business success.