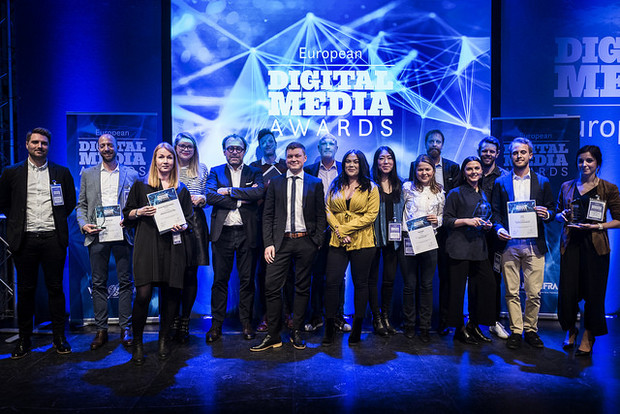 The winners were announced tonight (10 April) during a special presentation at the end of the first day of WAN-IFRA’s Digital Media Europe Conference in Copenhagen, which is taking place in the former Press Room at JP/Politikens Hus.

WAN-IFRA’s Digital Media Awards are a showcase for the best-practice innovation in digital publishing worldwide. The awards are presented in regions around the world throughout the year.

All regional winners are automatically entered into the next competition of our World Digital Media Awards.

Digital Media Europe, which has drawn more than 200 participants from some 30 continues on Wednesday.

The winners of the 11th annual European Digital Media Awards are:

No stranger to these awards, the Guardian’s website once again proved to be a hit with our judges. In 2017, the Guardian reported it had an average of more than 9 million unique browsers a day. As one of our judges noted: “The Guardian always knocks it out of the park. Great design, great content, forward-looking technology. Lovely.”

As a celebration of the world famous Beatles album, the idea was to offer users an in-depth story of the cover. The feature is a successfull combination of massive research and design development, which together results in a great story on an important part of music history. In total there are 77 personalities and 13 songs for the user to discover, sort and experience.

Said one of our judges, “For an audience familiar with the music but not the historical significance of the cover, this content delivers an immersive experience.”

The Paradise Papers – a huge leak of financial documents – revealed how the powerful and ultra-wealthy were secretly investing vast amounts of cash in offshore tax havens.

The BBC, among the nearly 100 media groups investigating the papers alongside the International Consortium of Investigative Journalists (ICIJ), conducted a week-long expose of how politicians, multinationals, celebrities and highnet-worth individuals used these complex structures to protect their wealth.

Central to the BBC’s output was a series of six animated videos explaining the most important stories coming out of the documents, breaking each one down in a compelling and accessible way. Concise and easy to understand, they were designed for publication on social media as well as the BBC News website, but they were also broadcast on the BBC’s TV news channels too.

– What’s on the plate, Aftonbladet, Sweden

During spring and summer of 2017 the worst famine disaster since World War II broke out. Every three minutes, a child died, and 20 million people are affected in East Africa and Yemen, according to the UN. Famine occurs beyond the usual media searchlight, lacking the inherent drama of war. Instead, the nature of famine is slow and quiet.

Magnus Wennman, praised worldwide for his innovative photo journalism, and Erik Wiman decided to try and break through the silence – what does one eat without food? They devoted three months’ work to traveling to the world’s most dangerous and inaccessible countries, Somalia and South Sudan.

With image, text, video and VR-TV in Swedish and English, the disaster was depicted in a whole new way – touching and reaching through to the audience. On the same date that Aftonbladet published What’s on the plate? – What the children have to eat, an exhibition with
the same name opened at Fotografiska, the museum of photography in Stockholm. As a result, news journalism found an additional and effective publication format. In connection with the publication in all Aftonbladet channels and the exhibition at Fotografiska, the children’s organization Save the Children, which operates amidst the famine catastrophe, started an international fundraising campaign.

This special historical project by the Russian news agency TASS is dedicated to one of the most dramatic pages in Russia’s past – the Patriotic War of 1812. The program is based on a map outlined by French engineer Charles Joseph Minard in 1869. The statistical diagram presents a graphic picture of Napoleon’s Russian campaign and all the stages that eventually led to his army’s defeat. TASS tracked the route of the French army and compared Minard’s statistics with the latest findings and estimates, while recounting key episodes of that conflict.

“An effective animated mapping technique fails to distract the audience from the overall story, in fact, it adds value to the whole narrative,” one of the judges said. “It’s clear how much thought went into the user journey for the desktop audience, never having to stop and move from the text piece to visual. User reading pace and the animated maps walking in tandem ensuring the audience will stay engaged.”

The idea behind Z+ was to offer the entire content of the weekly issue of Die Zeit digitally – thereby providing the > 10M online readers with additional top-quality stories without weakening the print subscription and newsstand
retail. Z+ is an elaborate combination of freemium, metered and log-in models.

Before the publication of the print issue of Die Zeit on Thursday mornings, its entire content is published on the website on Wednesday evenings. The top stories, however, are marked with a red “Z+” symbol and reserved for existing and newly registered digital subscribers.

“It’s a very well planned deployment of a paid content strategy for a quality paper,” said one of our judges. “An attractive offer for the loyal users and a good onboarding (registration) of potential strong users.”

“The results are outstanding,” said one of our judges. “But more interesting is the process, involving newsrooms, that led to them. The way they demonstrated to the journalists how to better cover their usual topics for the interest of the users and help them understand how they can contribute directly to the conversion. The right workflow aligned with the goals is also very interesting. Good job!”

Löfbergs is one of the largest family owned coffee roasters in the Nordic region. Within their project Next Generation Coffee, Löfbergs supports coffee farmers in Colombia and other places, with the aim of making sure that the young farmers can make a living from their trade.

Bonnier News Brand Studio set out to tell the stories of two of these farmers, Emilio and Ana-Maria, visiting them in their homes high up in the mountains outside Medellin, Colombia.

The aim was to achieve an understanding about coffee, its journey from plant to cup and the everyday life of the young farmers. A VR-experience was also part of a total campaign containing Longread native on dn.se and live events and seminars at Almedalen, Sweden’s largest gathering of politicians, senior executives and communication-experts.

“Bravo. Great focus. Fantastic storytelling. Brilliant execution. My favourite,” said one judge. “Shows what can happen when you combine a good story with a team of storytellers that use the digital tools available to make it all come together. The readers benefitted here.”

OtherWorld is start-up piloting next generation news. It uses beacon technology to magically send location-based stories to people’s mobile phones, without the need for an app.

As such, it doesn’t need a news homepage or traffic from social media or search engines. It has tested our vision for what news could look like in 2020, based on our idea of “Living Media.”

Fluid news serving the fluid communities that may occupy a particular place at any given moment in time. With a powerful and highly responsive news ecosystem, they can change the stories in an instant according to who is using the space. So it could be football fans en route to a match, a commuter wanting a business briefing, a festival goer in a public square, or a tourist wanting to soak up interesting stories from the past. Since beacons are a portable device, OtherWorld could also uproot or deploy them all at once for major news stories or police appeal.

The pilot ran in Manchester, UK, in 2017, in six areas of the city. The pilot phase of the start-up was secured nonequity backing from Google and gathered 60+ content partners, from BBC, Trinity Mirror, NHS, Great Manchester Police, National Football Museum, Manchester City Council, and various other cultural and charitable organisations. It provided proof of concept for a very different type of news experience for the generation of people who love stories but will never buy their local newspaper.

The idea was to encourage people to donate SEK 100 (about 10 euros) to their favourite local soccer team – and Aftonbladet would double that donation. When making a donation, customers also received free access to Aftonbladet Plus for two months, and after that, they turned in to recurring subscriber, free to cancel at any time.

The campaign was made in cooperation with the Swedish Football Association and made it possible to donate to more than 2,500 clubs – from professional clubs to local ones in the 8th division. The total collected amount was allocated to the youth sections of the clubs.

Market communication was primarily focused on Facebook and secondary on the Aftonbladet news site. Through Facebook Custom Audience, the campaign was channeled to clubs and local club representatives and to people who interact with any of them. The partner SvFF also got nine of Sweden’s most famous soccer players to talk about the importance of their youth club as a social video promotion part of the campaign.

“Impressive, targeted campaign with specific goal that was overachieved,” said one of the judges. “Creative use case of donation to trigger future payments of advertisers. Potentially an even wider audience could have been reached through a more agressive social outreach, however the clear success on the paid subscriptions shows it worked as planned.”

A brand recognition campaign was produced to help the launch of Omni Ekonomi in Sweden. It ran for two weeks on big signs in the Stockholm underground, on digital outdoors advertising billboards and with digital ads in social and digital media.

The idea behind the campaign was to illustrate how Omni Ekonomi provides readers with fast and concise news items that clearly summarise complicated developments. Omni and Omni Ekonomi have become well-known for their short and well-written texts and the push notifications that summarise complex world affairs are among the most popular features.

The campaign sought to reestablish the merit of push notifications and show that a lot can be said with only a few words. The strategy put Omni Ekonomi in the spotlight and positioned the app cleary in the Swedish market.

“It’s not easy to arrive in a market with established players,” said one of the judges. “The app uses the Omni expertise on push and the campaign highlights the newsroom skills in digesting the most complex news. You immediately see the benefit (saving time, simplify the complex, access to all international news….) Good job and the results show it!”

With the MiTT ID (MY ID) project, Aftonbladet’s Olivia Svenson and Frida Söderlund focused on a question that has seldom, if ever, been afforded any space in the Swedish media: what is it like to be a young transgender person in Sweden?

An in-depth series of articles and a TV documentary on gender identity detailed the struggle endured by these young people, asserting their right to be themselves. They gave a voice to an exposed and growing group in society that has struggled in silence for a long time.

“Aftonbladet at its best,” said one of our judges, “original investigation, difficult topic, well planned multi-platform, multi-formats execution and making an impact (e.g reaction from the government).”