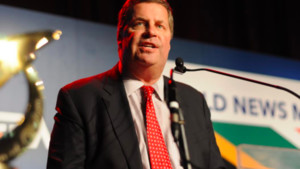 by WAN-IFRA External Contributor info@wan-ifra.org | May 2, 2018

By Dave Callaway, President of the World Editors Forum; CEO, The Street.com

Trump’s antipathy toward the media is well known, but to see the depth of his hatred for journalists come out in a private exchange like this with a federal law official threatens more sinister days to come. For the 262 journalists currently languishing in jails in countries such as Turkey, China and Egypt, according to the Committee to Protect Journalists (CPJ), government punishment for reporting the truth is no laughing matter.

Today is World Press Freedom Day, and this year it’s more important than ever. Threats, intimidation, even killings of journalists for their work is on the rise from South America to Europe to Asia. Elections are coming this year in some of the more challenging countries, including Myanmar, Indonesia, and Mexico. One Mexican journalist, Emilio Gutierrez Soto, is already sitting in jail – in the United States. He faces deportation by Trump a decade after fleeing here from Mexico in fear for his life after being named to a hit list of journalists.

As president of the World Editor’s Forum, a group of international journalists tied to news and publishing organization WAN-IFRA, I watch colleagues around the world bravely fight oppression and privacy violations in their countries. Reporting to overturn state capture in South Africa; deep state censorship in Pakistan, where news organizations are forced to remove stories or stop reporting by unknown forces tied to the security apparatus; investigations of digital media in India, where editors say they are routinely intimidated by the government of Prime Minister Narendra Modi, despite constitutional guarantees of freedom of speech.

My WhatsApp editor’s group list buzzes daily with each new challenge. Just Wednesday, 13 more journalists were jailed in Turkey, which has more than 70 currently behind bars. We work together to support each other and lobby governments as best we can, but without public support it is always a difficult fight.

That support does exist, when the public gets riled up enough. We saw it two months ago in Slovakia, after journalist Jan Kuciak and his fiancé were shot dead in their home, apparently by local mafia. Public protests swelled in the days following the murders, to the point where several government officials were forced to resign for alleged ties to the mafia. We saw it after the murder of Maltese journalist Daphne Caruana Galizia in October, who was blown up in her car near her home. European officials have piled pressure on Maltese authorities to solve the murder in recent weeks.

Arrests have been made in both cases, but nobody believes the people who ordered the killings are anywhere near justice. In fact, more than 90 percent of killings of journalists worldwide have gone unsolved, according to the CPJ.

Back in the U.S., the more Trump agitates, the more his supporters turn against the press. Colleagues covering the president report death threats and online trolling daily, including horrible verbal harassment against woman reporters. The idea of jailing journalists may have been a shared joke to the President and Comey, but it’s no joke to an industry that is fighting for its life in a growing list of countries. The U.S. fell two places this year in the 2018 World Press Freedom Index, put together by Reporters Without Borders. It placed at No. 45 among 180 countries in terms of press freedom, above Italy and behind Romania. Think about that. Romania. Trump is to blame here.

Verbal violence leads to actual violence. We can see it playing out right in front of us. Jailings in Turkey and harassment in India are happening real-time. Don’t take free speech for granted, and don’t wait for a journalist to be murdered to protest. Wherever you are – including the U.S. – it can happen there too. And is.