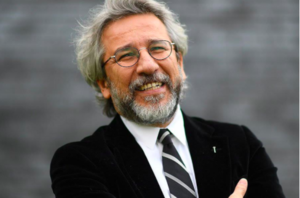 by WAN-IFRA External Contributor info@wan-ifra.org | May 2, 2018

By Can Dündar, Former Editor in Chief of daily Cumhuriyet

‘Peace at home, peace in the world,’ is Atatürk’s celebrated maxim. In 2016, Cumhuriyet columnist Aydın Engin alluded to the founder of the Turkish Republic with his Peace in the World, But What About at Home?published two days before the coup attempt. The putschists happened to style themselves as the ‘Peace at Home Council’. Last week Engin was sentenced to seven years and six months in prison for a ‘subliminal message’.

Cumhuriyet cartoonist Musa Kart booked a holiday in Bodrum after seeing an ad in the paper. The tourism firm came under investigation for links to followers of Fethullah Gülen accused by the government of masterminding the coup attempt, and Kart was duly arrested in the same probe. He stated in his defence, ‘There I was, looking forward to three days in a room with a sea view in Bodrum; instead I got nine months in a room with a concrete wall view in Silivri.’ Last week he was sentenced to three years and nine months for ‘aiding and abetting a terrorist organisation.’

Cumhuriyet’s ombudsman Güray Öz was arrested over phoning someone linked to Gülen. During his trial, Öz admitted speaking to the person in question once, to order a birthday dinner – the other party happened to run a take-away restaurant. In his defence statement, Öz asked how he could have been expected to know he was ordering pizzas from a fellow under investigation. Last week he was sentenced to three years and nine months for ‘aiding and abetting a terrorist organisation.’

Şenol Buran, Cumhuriyet’s tea boy, was late for work one day due to road closures designed to whisk the President through. His frustrated exclamation that he wouldn’t serve Erdoğan a cuppa, were he to drop in, was reported by the head of security at the newspaper. Buran was arrested on the following morning for ‘insulting the President.’

Akın Atalay is the Chairman of the Executive Committee of Cumhuriyet. The Prosecutor accusing Cumhuriyet of seeking European funding asked, ‘How do you intend to maintain your independence if you’re benefiting from these grants?’ Atalay pointed out, ‘Eighty per cent of the judges and prosecutors in Turkey trained thanks to those European grants. Have they compromised their independence?’ Last week he was sentenced to seven years and three and a half months for ‘aiding and abetting a terrorist organisation.’

Murat Sabuncu, Cumhuriyet’s editor-in-chief, reacted to a rally that excluded the HDP in the wake of the coup attempt. His headline, Deficient Democracy, was declared as ‘seditious’ by the Prosecutor. Last week he was sentenced to seven years and six months for ‘aiding and abetting a terrorist organisation.’

And I, the former editor-in-chief of Cumhuriyet, was tried on charges ranging from ‘repositioning the newspaper’s logo and altering its editorial policy’ through to ‘publishing a Gülen-related news item on the front page with a photograph’ and ‘publishing the same headline as a Gülenist newspaper on the same day.’ As I live abroad, sentencing has yet to be pronounced. My barristers pointed out in vain that neither editorial policy, nor indeed which item may be printed on which page under what headline, would be matters for prosecution to decide…

Last week a deluge of punishment rained on the staff of Cumhuriyet, this last bastion of the free press in Turkey, editor-in-chief through to reporter. Despite their conditional release, pending appeal, they are all banned from travelling abroad.

Turkey ‘celebrates’ World Press Freedom Day as the biggest prison for journalists in the world.

Can Dündar was awarded the 2017 Golden Pen of Freedom by WAN-IFRA.

This blog can be downloaded below and published.