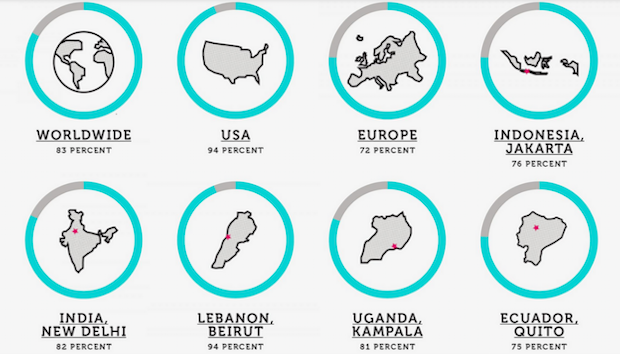 by Simone Flueckiger simone.flueckiger@wan-ifra.org | May 18, 2018

With its stories, Orb Media (Orb) aims to catalyse a global dialogue on critical topics in a way that focuses the attention of governments, industry, civil society, researchers and the public.

“We want to put quality information into the hands of the public, but not be prescriptive about what they do with it,” said Bingham, who’ll also be speaking at this year’s World News Media Congress in Estoril, Portugal.

“We want to help them make decisions, and make those global issues real and relevant to their daily lives in a way that empowers them to act with that information in a way that’s right for them.”

Providing a global perspective, Orb has covered subjects such as domestic violence, the labour trade, or microplastic contamination in drinking water, with its latest investigation “Plus Plastic” revealing that more than 90 percent of some of the world’s most popular bottled water brands contain plastic particles.

Research for stories starts off with data collection and analysis followed by a survey of the communities affected by the topic, allowing Orb to update its data and gain access to sources to solicit qualitative information, such as videos, images, or free-form answers. With the data collection and pre-reporting stage complete, professional journalists then go out into the field, travelling to at least three countries to gather information.

Stories can be viewed in different formats, such as multimedia, text, audio or data, and are available in English, Arabic, Spanish and Portuguese. Additionally, they’re distributed by the Orb Media Network, composed of roughly a dozen publishing partners, including the BBC and CBC, which receive access to a certain number of stories as part of their membership package.

A constructive relationship with the public

Combining original research and reporting with infographics, videos, and images, Orb’s stories also feature a public engagement component with a few short surveys scattered throughout the text, designed to get readers to reflect on the issues covered in the story.

“One of the values we have is rather than having what I would describe as an extractive relationship with the public, we want to have more of an ongoing constructive relationship where we value and respect the knowledge and experience within the public and the fact that they can help us better understand the world around us,” Bingham said.

For each of its investigations, Orb produces a Global Impact Report, featuring reach and audience metrics as well as the measures that have been taken in response to a story.

For instance, following the publication of “Plus Plastic”, the World Health Organisation announced a review into the potential health risks of microplastic in drinking water.

“But I think it’s really important and we’re really interested in demonstrating the impact that you can have when you work and think in this way.”

Currently, Orb’s revenue model is a mix of membership fees from the Orb Media Network, foundation grants, and crowdfunding, but Bingham says they’re aiming to launch a membership model for individual readers next year.