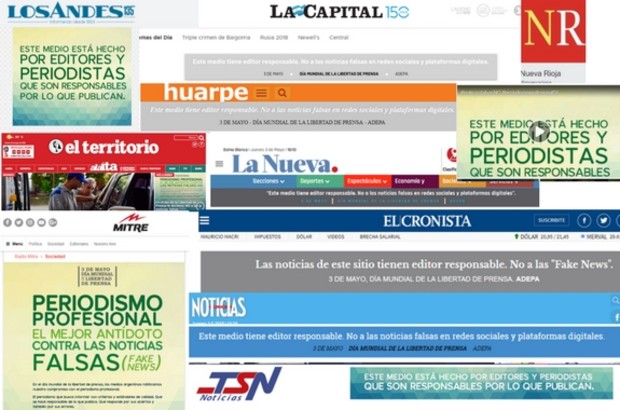 The Association of Argentinian Journalistic Entities (Adepa), an institution that brings together 200 media from across the country, is promoting this campaign. ADEPA is WAN-IFRA’s member association in Argentina.

The campaign is focused on the defense of professional journalism as the best antidote against fake news. In that sense, Adepa demands that social networks and search engines should not confuse quality journalistic information – which relies on the figure and responsibility of an editor – with the spread of fake news, anonymity, and defamation, which fuel violence and even alter political processes.

The campaign makes a strong call for networks and search engines to recognize the role of journalistic content and distinguish them from the generators of fake news that misinform users, affecting public debate, community bonds and institutional dynamics. By failing to do so, society loses quality information, thus affecting the basic resource of any democracy: an informed society.

Adepa’s campaign is the first of a series of actions that Argentinian media is conducting that aim at preserving the value of professional journalism and intellectual property in the face of growing controversies related to social networks and other Internet platforms.

On 6 April, Argentina’s main media companies gathered to define strategies to fight the spread of fake news, the improper use of third-party content, and the manipulation of databases, among other issues.

Key figures of Argentina’s news media industry, including print, broadcast and digital natives, explored ways to address these issues by and through other alternatives, taking into account the responses that are being tested in other countries.

The participants agreed to create two working committees, one focused on legal issues and the other one focused on content and market. Both will collect background information, formulate proposals, and seek consensus on strategies and action plans.

The editors pointed out that it is no coincidence the meeting takes place amidst the growing questions around Facebook’s data and privacy issues. The most extensive social network in the world is being investigated by the authorities of the United Kingdom and the United States for facilitating databases with information on its users’ profiles, in order for them to be used in political marketing campaigns. It is also suspected that this information was used to spread fake news that could have influenced electoral processes such as those that led to the election of Donald Trump in the United States or to Brexit in Great Britain.

Editors are also concerned about the company’s recent decisions such as modifying the algorithm of its newsfeed or altering its mechanism for sharing news. Facebook decided unilaterally to deprioritize the contents of professional media news sites with a responsible editor, assimilating them to fake news generating sites, which affects the right to information.

Other issues amid the working agenda are the role of content producers in the distribution of digital advertising revenue, the issue of the use of news sites content  by dominant platforms such as Google and other big global intermediaries and the retribution it should entail.

At the meeting, an outline of objectives was agreed which will also include exchanging ideas and knowledge with international specialists, consortiums of global media such as the News Media Alliance from the United States, European media associations, officials, legislators, legal referents, and local experts in intellectual property law, freedom of expression and the right to information.