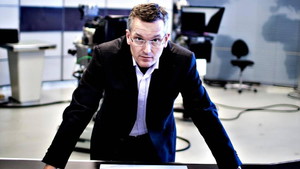 “It is good, old-fashioned, credible journalism, asking great questions and adding questions that we haven’t really learned in our journalism training. The questions are ‘what now?’ and ‘how?’,” he says.

Haagerup’s interest in the concept was awakened in the early 1990s, when he was covering Danish politics for national newspaper Jyllands-Posten. Neither the government or the opposition had a majority, and the two sides could not reach an agreement. Frustrated with the way journalists fueled the conflict and fed up with writing about the stalemate, Haagerup changed tack. Acting as a mediator, he invited the chairpeople of the youth organisations of the various political parties to come together to see whether they might succeed where their older counterparts had failed.

It worked. The young politicians from the governing and opposition parties reached a compromise. “That was the story, and we ran that story, showing everybody that it was in fact possible to find a compromise,” says Haagerup.

“As journalists, if we only cover the world looking for all the problems and if we only ask politicians about all the things that go wrong and all the dramatic stuff, we influence how they reply, and what they think about, and also how the public perceives reality.”

Ahead of the World News Media Congress, where he will participate in a panel discussion entitled “Journalism: The Reboot,” Haagerup explained constructive journalism in a phone interview. The interview has been edited for clarity and length.

WAN-IFRA: What are some of the problems constructive journalism aims to address?

Ulrik Haagerup: The big problem we are facing now in democracies is that the gap between reality and the public perception of reality has never been bigger.

Journalism should give people an accurate picture of the world, and we are not doing that, because we angle our stories to fit what we think will create a so-called ‘good story’ – a story that other journalists, editors, and other media will like, that can win us prizes, generate votes, and put us on the front page… We filter the world in such a way that it gives people a totally wrong picture of the world.

There are consequences of that. One is that the rudest, the loudest, and the guy with the most likes on social media becomes president.

“The reason Donald Trump became president was that he received more media exposure than any other politician in the history of democracy – because he catered to the usual criteria of news: dramas, conflicts, crooks, and victims.”
– Ulrik Haagerup, founder and CEO of the Constructive Institute

If our job is to give people an accurate picture of the world in order for them to make up their own minds, and we are not doing that, we need to change. That’s what constructive journalism is all about.

The trend to authoritarianism is worldwide at the moment. It’s too late to stop leaders like Trump or Duterte – they’re in power. What is the role of constructive news in this situation?

The goal of constructive journalism is to give a fair and accurate picture, not take part in a conflict. Just because Donald Trump has declared war against the news business, we shouldn’t fall into his trap and say, ‘We are at war with Donald Trump.’ We should give a fair and accurate picture of the situation. We should cover the world as it is, the good and the bad.

A lot of people don’t think we are credible and don’t trust what we do because we leave things out.

“In Europe, we have deliberately ignored problems with immigration because a lot of journalists and editors were afraid of fueling fascism. That led to a lot of people thinking they couldn’t trust media because we didn’t tell them the truth.”
– Ulrik Haagerup, founder and CEO of the Denmark-based Constructive Institute

We should talk about the problems and about the possibilities, the hopes and dreams. The aim of journalism shouldn’t be to generate a ‘good story’ that can sell; it should be to give a fair and accurate picture, and tell it in such a way that a lot of people understand it, and engage them in a debate about important issues. We should inspire people, bringing examples from places around the world where people have faced the same problem we are facing, but they did something. What can we learn from that?

Constructive journalism [Editor’s note: The illustration at right is the cover of Haagerup’s book on the subject] is not a North Korean version of journalism, where we ignore the problems of the world. This is not about happy news, positive news, nice stories. It’s about important issues facing society, believing that journalism is a feedback mechanism that should help society self-correct.

Many stories published on websites aimed at younger audiences are highly subjective. What do you think of that trend?

That’s something that I personally am very scared of. A lot of news media are becoming ‘views media’. It’s easier, it’s cheaper, and to some degree people want to read something that is opinionated. But in my mind that’s not the job of journalism. I know we cannot be objective but I do believe, as [Watergate reporter] Carl Bernstein put it, that journalism is giving people the best obtainable version of the truth.

I think if we want to be credible, if we want to have a future in society where everybody can tell every story to everybody all the time, there is a strong need for professional journalists who give people the best obtainable version of the truth, who put the public interest ahead of their own self-interest. That’s how you become an authority.

What are some good examples of constructive journalism that you have come across?

One example is that of a small Danish newspaper published on an island. The paper was dying, which in fact wasn’t so bad because it was a terrible newspaper. It was only covering traffic accidents and crimes, and things that were going wrong in that society. Circulation was doing down. Revenues were going down. Everything was going down the drain.

Four years ago, they got a new editor-in-chief who said, ‘We need to do something different. We need to change our mission.’ Instead of pointing fingers at everything that went wrong on that island, they thought, ‘Our job is to make this island a better place.’ Now they cover problems in order to raise a debate about what to do about them, and they find interesting examples from other islands and other societies on what have they done to solve the problem. They’ve become a source of inspiration for the whole island. They cover problems, but they also cover potential solutions.

That mindset change has led to remarkable results. Their circulation, their advertising revenue and their profit is growing.

“More and more organisations experiment with constructive journalism and find it’s not only good, it’s not only fun doing it, but it also generates remarkable results.”
– Ulrik Haagerup, founder and CEO of the Denmark-based Constructive Institute

Is it possible to do constructive journalism via Twitter and Facebook, or is it possible only in print and long-form stories on websites?

It’s not a matter of platform – it is a question of mindset and approach. We know our business is in a crisis.

If you have constant deadlines, you can’t really think long-term. What most news organizations do is try to give people more stories, faster stories, in order to attract attention from people who are distracted by all kinds of other media. They do that on more and more platforms with fewer and fewer editorial staffers and ever-smaller budgets. In any other industry that wouldn’t sound like a winning strategy, and it’s not one in the news business either.

There’s no business model in thinking we can beat Twitter in terms of speed. Why should we? People don’t need more news. They don’t need faster news. They need someone to trust. They need someone who explains with passion, with knowledge of and involvement in the big challenges they face in their society, and inspires them to find solutions. That will be meaningful. If it’s meaningful, it’s also valuable, and people will pay for it. An inspirational story can also be a ‘good story’.

This is not about neglecting the watchdog function. It’s not a rejection of investigative journalism, of holding people in power accountable, because that’s still a very important part of what we do.

But we should also help society self-correct by inspiring a debate about solutions to problems. We can play a role here – and local and regional newspapers in particular have a giant part to play.