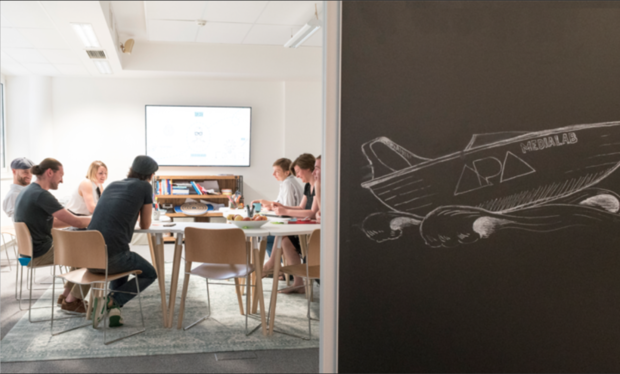 In January 2017, the APA-medialab was created to improve the time to market of their products and to break down silos that existed within the news agency in terms of approaching topics of innovation. In the meantime, the Head of the lab left to start a company with his brother, and Clemens Prerovsky took over.

1. What are you working on right now?

We have a lot of stuff going on right now. The thing we’re currently working on is a really playful one. We often have to show something at events that we’re attending. So we’re working on an application that uses face detection and interprets your emotions using open source software. Based on that we automatically generate a social media message that you can then post.

So you can write a post with your face!

But it’s not only fun. It also incorporates technologies that we might use in the future, like emotion detection, face detection, automated text generation and Artifical Intelligence. And that’s where we’re headed.

In May, we will have our first full-fledged machine-learning project, which I’m really excited about. We will categorise text and news, so customers can order all the news articles that are about them to be sent to them every day. Right now, somebody is reading through 300 articles every morning and we hope to automate that to some extent. I’m confident that we can do that with high precision. As a news agency, we have years and years of data that we can use to train a Neural Network to do that.

“But it’s not only fun. It also incorporates technologies that we might use in the future, like emotion detection, face detection, automated text generation and Artifical Intelligence.”

2. What changed since the lab was created in January 2017?

Something will probably change very soon, namely the way we set up the road map for the lab. So far, everybody could book their time with us and we try to balance all the requests and ideas from all parts of the company: from different departments, from the CEOs and some from the lab itself. We collect all of those requests and turn them into a road map. It’s a rather complicated process and the proposals are too often focused on the now.

I would like to change that pretty drastically, so that the lab provides all of the topics for the future roadmap. Since we also have a research focus and want to look at the trends that will impact us until 2025. At the moment, this is missing a bit from our roadmap, except the AI stuff. And I would like to focus more on the future. Decide where the company wants to be in a few years and then work towards that.

3. What is your main lesson learned?

One thing we’ve learned is that participating in a Design Sprint during one week is perceived as a very high commitment. Which is understandable, because you’re really taken off the job for one week. But no one seems to realise that it would have otherwise taken half a year to develop the same project.

The other thing is that the Google Design Sprint is focused on testing on Friday, but that’s super hard to do in Austria. People usually try to get their stuff done on Friday morning, so they can leave early. Which means there is no room for testing with us.

That’s why we changed up the sprint a bit. We spread it out, so the developers can continue coding on Friday and we do the user testing the following week. This works really well against the fear of high commitment and the developers have more time to do their work.

We also tried a very short sprint once, which lasted only 2,5 days. The owner was very happy witht he results, but I wasn’t. I felt the ideas were too much aligned with each other, because we lacked this phase of creative input in the beginning. That just wasn’t enough. We basically ended up with seven sketches of the same product.

“I would like to focus more on the future. Decide where the company wants to be in a few years and then work towards that.”

4. What has been your ‘best failure’?

A few months ago, we did a sprint on voice-enabled media with the aim to think of new ways to use voice in media. The only thing you can really do at the moment is ask Alexa for news updates. You get a news update that she reads out, and in the morning it’s the same as in the evening. So we wanted to work try and come up with new ideas for voice-enabled media.

Everything was going really well; we aligned the sprint with the launch of Google home in Germany, so we had the Google device and we were prepared really well. But then it turned out that although Google home works in German, it doesn’t have a German API. So we couldn’t do anything with the device. It was totally pointless. Nobody could develop an app in German. So that was kind of a failure.

Alternatively we used Alexa, but Alexa has terrible voice capabilities. We were not impressed with that. So in the end we used the browser’s capabilities for voice-recognition. Which are not as good, but they were there and they were free.

And we had so much fun! Although Alexa failed all the time, the cool thing is that the design sprint method allows you to accommodate to the situation, even when things go really wrong. We were not stuck to the Google device. We were able to work around it and still do the sprint.

“The cool thing is that the design sprint method allows you to accommodate to the situation, even when things go really wrong.”

5. What advice would you give to someone looking to start a media innovation lab?

Stick to the method and do it by the book, at least in the beginning. Things start to fall apart quickly enough, but what I see a lot of times is that people start changing up the method before they even tried to do it correctly once and see how it works.

That was one of the first things I wanted to try when I became head of the APA-medialab, to really do it by the book. We didn’t use the map for example, because people didn’t like it. But it actually brought some really nice insights.

Even though we changed the time frames, I don’t like changing up those methods too much. The agile methods are so focused that taking something out means you’ll miss an important part of the process. It’s like driving a three-wheeled car.

What you could do is take parts of the method and use them in different contexts. Every piece is there to solve a specific problem, in a specific stage of generating ideas. And of course you can reuse them in other situations.

APA Editor-in-Chief Michael Lang will be at the World News Media Congress to talk about his experiences working with the Lab. Join us for the LabLunch on Friday 8 June.

Read about the 40 Media Labs we talked to so far or contact us to share your story.