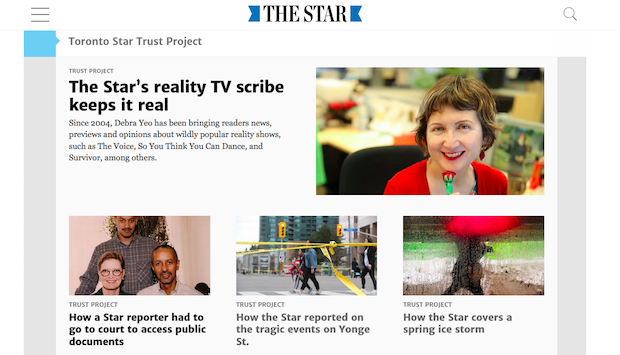 by Simone Flueckiger simone.flueckiger@wan-ifra.org | May 15, 2018

“I think that the Trump effect has been really strong and that it has really empowered people to attack journalists and journalism, and we need to do something to tell our story,” said the Star’s public editor Kathy English.

“We’re storytellers and we need tell our story a whole lot better than we have in the past.”

Under the umbrella of the Trust Project, which has recently been nominated for a News Literacy Award given out jointly by the Canadian Journalism Foundation and the Facebook Journalism Project, the Star is taking readers behind the scenes of its reporting and decision-making process.

It all started in May last year when the Star’s managing editor, Irene Gentle, established a trust committee tasked with fostering reader trust and improving media literacy. As a first order of business, the committee reached out to readers to get a sense of which matters and areas they were most preoccupied with.

Based on their responses, the Star came up with a two-pronged approach to enhance reader trust: appointing a transparency reporter and overhauling its labelling system to better distinguish between news stories and analysis.

Investigative journalist Kenyon Wallace now writes a weekly feature to shed light on how the Star produces its journalism, covering everything from the work of the opinion editor to an in-depth look at how reporters responded to the deadly van attack that took place in Toronto in April.

“We got great feedback on these stories. We really feel that readers are appreciating and understanding that there’s so much more to journalism than just what appears on the website or in their newspaper,” English said.

The stories are hosted in one place on the Star’s website, along with columns produced by English, in which she has addressed topics such as media literacy, trust or misinformation.

The Star also found that readers were struggling with differentiating news from opinion, and worked to introduce a system that labels the different types of content more clearly.

Now going into its second year, the next phase of the Trust Project will involve more direct engagement with readers, English said.

“We already have a Speakers Bureau that sends our journalists out in the community to speak to community groups. That’s one of our highly successful initiatives,” English said.

“So we’re looking at how we galvanise that a little more to standardise the trust messages and make sure that everybody talks about what is trusted journalism when they go out to speak.”

A boost for newsroom morale

In addition to these measures, the Star is implementing the core set of Trust Indicators identified as part of an initiative (also dubbed Trust Project) led by journalist Sally Lehrman.

English said that while putting in the extra effort to pursue these types of initiatives is a challenge for resource-strapped newsrooms, it’s a worthy cause and has proved to be a positive experience overall.

“I think it’s been really good for newsroom morale. We feel like we’re doing something positive to deal with that barrage of criticism and doubt about journalism.”