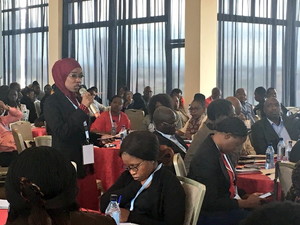 More than 140 journalists, CEOs and HR managers from countries throughout Southern and East Central Africa attended the WIN Leadership and Innovation Summit on 8 May.

In his opening remarks, WAN-IFRA President and former New York Times senior executive Michael Golden spoke of the importance of gender diversity for the future of the media industry. “Our audiences want diversity, they want to see themselves in our products,” he said.

Golden’s sentiments were echoed by Melanie Walker, Director of Media Development at WAN-IFRA and WIN Project Lead,  who stressed, “Gender diversity is good for business.”

The day began with keynotes by Catherine Gicheru, Country Lead, Code for Kenya, on disrupting the media scene; Lisa MacLeod, Head of Digital, Tiso Blackstar, on digital strategies; and Churchill Otieno, Managing Editor of Digital, Nation Media Group, on trusting the media in the digital era.

The afternoon session transitioned to case study presentations led by members of the WAN-IFRA Media Freedom Brain Trust, who travelled from Sweden and Norway to participate in the Summit and conduct workshops with participating HR Directors:

Following the afternoon presentations, participants formed working groups to discuss challenges and concrete solutions to address these overarching themes to work toward identifying priority actions for the media industry to take to increase gender diversity.

On the final day of the summit, 25 CEOs and managing directors from participating media took part in a seminar and best practice share session led by WAN-IFRA President Michael Golden. HR directors engaged in a parallel working session led by the Media Freedom Brain Trust members.

The event series kicked off with a day of Media Management workshops led by Paula Fray and Churchill Otieno for over 70 women journalists from 8 different countries on 7 May.

More photos of the event can be found on Twitter.