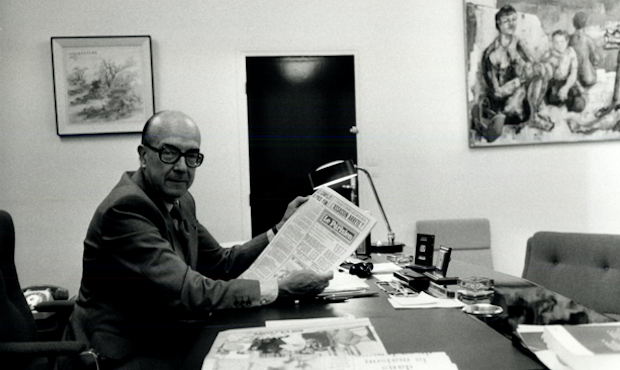 WAN-IFRA was born in 1948. It was then called FIEJ (International Federation of Newspaper Publishers). Seventy years separate us from the first Congress, which was held in Paris. That probably seems like an eternity for most of you; for me, though I was not yet born, it seems like yesterday. For all those who collaborate with WAN-IFRA, a strong bond, and an immutable commitment bring us closer to these first years of FIEJ: solidarity in the service of a free, sustainable and innovative press, confident in the future.

That link is just as powerful 70 years after the start of FIEJ. Claude Bellanger, its founder, who was also the co-founder and publisher of the French newspaper Le Parisien Libéré, was general secretary of FIEJ from 1948 to 1962, and its president until 1978. For more than 30 years he was the organization’s main architect and its irreplaceable master builder.

In 1942, Bellanger summarized the two concepts that always animated him: “struggle and hope.” He transmitted those concepts to FIEJ so well that we at WAN-IFRA still carry them proudly in 2018. This motto, which we adopt unreservedly, was also that of a group of people of conviction, resistance fighters during the Second World War, shaped by the virtues of freedom and tolerance. They patiently and relentlessly advocated what has become today the world’s leading association of news professionals. For many of us, the perils certainly seem more distant in 2018 than they would have been for the FIEJ pioneers in 1948, at the end of four years of an appalling abyss. And yet, the free world and freedom of expression still seem to be threatened in countries that were thought to have been immunized against obscurantism and intolerance.

We will meet in June 2018, at our annual World Congress in Estoril, and work with our members all year long because we are aware that democracy is fragile, and that a free, sustainable and therefore independent press is an unchallenged asset that can preserve us from despotism.

In 2018, as in 1948, corruption, barbarism, intolerance and censorship still harass the press, in forms that are undoubtedly more insidious, more subtle than 70 years ago, but equally devastating to individual liberties. There are too many examples to cite them all, and the reasons for the decline in press freedom are numerous: the fatal drift of governments against individual liberties, as in Turkey and Egypt; governmental control of public media, even in Europe, as in Poland; and increasingly tense or catastrophic security situations in Yemen or Mexico.

Only those who benefit the most tend to forget that freedom of expression must be preserved at all costs, because it is a fundamental right, a touchstone of all our freedoms, and press freedom enhanced by financially solid, independent news publishing companies is one of its fundamental pillars.

Claude Bellanger wanted FIEJ to be a vigilant organization and constitute a united strength in the face of those erosions of freedom. WAN-IFRA continues to fulfill this task, championing the rights of journalists to operate free media around the world. Together with several thousand member companies, 60 national representative associations support the work of our organization in more than 120 countries. The legacy passed to us by Claude Bellanger is not only a heritage to preserve and contemplate with nostalgia. This memory drives us and motivates us on a daily basis to meet the challenges of digital transformation.

The generation of journalists, press owners, friends and relatives who surrounded Claude Bellanger in France and internationally was marked more than any other by the turmoil that beset the planet during the Second World War. It was by fighting and sharing the values of a world finally liberated and opened up internationally that they quickly set up the global network of the International Federation of Newspaper Publishers. Bellanger devoted himself to it fully for more than 30 years. First as general secretary, then as president. He would say of these three decades of international life that they always fascinated him, that FIEJ gave him a lot and that in return he learned a great deal. This is the legacy he has passed on to WAN-IFRA’s members, and helps explain why so many new members join the association, almost 20 since the beginning of the year.

“Persuade, lead, and undertake” was the passion of Claude Bellanger in 1948. That was also the motivation of Walter Matuschke, founder of INCA in 1962, which became IFRA in 1967. This has remained the common thread of directors and successive presidents of what later became WAN, IFRA, and then WAN-IFRA. This is the meaning of the 70 Congresses organized since 1948, the one we are organizing this year in Estoril (Lisbon), and those we will organize in the future. As Bellanger said, we meet “to try to find points of connection between the spirits, between the peoples, and at the same time not to wait, in a passive way, for the perils to come,” threatening the freedom of information that is essential to the normal functioning of open and tolerant societies.

Nicolas Bouvier, tireless adventurer and unclassifiable novelist, said it differently, in a way that I particularly like and that I experience daily when meeting our members: “We must find the unity of the world that travelers learn to know, and feel and live the harmonies that bind people and things, rather than sticking to what separates them.” The alternative is an inability to invent one’s future.

To close this tribute to our founder, I will quote one of his leitmotivs that animates me in my daily work at the service of our members: “The future of the press, it is in this desire that everyone will have to maintain the freedom of the press. It is also in this openness of mind that men, instead of having blinkers, will have their eyes fixed on the whole world, will try to understand and will try first to understand one another.”

This desire to understand and also to share our differences is one of the last great utopias that is still worth fighting for. “Struggle and hope,” together and fraternally!

Facing criticism for his response to 12 journalist murders, Mexican president lashes out at WAN-IFRA