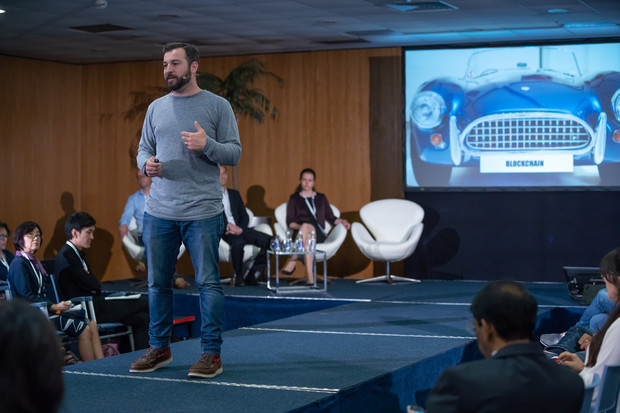 Dicker (in the photo above) had a great gig at the Bezos-booming Washington Post as the iconic newspaper’s Innovation Chief, helping to roll out such products as the Arc CMS. But earlier this year, he bolted WaPo to head up the blockchain-backed platform Po.et, essentially created “to help save publishing.”

Blockchain is undoubtedly the biggest tech buzzword used today. Across all industries people are talking about this innovative technology, but what are the opportunities for publishers? At WAN-IFRA’s recent World News Media Congress, a session was dedicated to  blockchain – and its growing impact in the news industry – featuring a panel of experts. They sought to demystify the complexity of blockchain and debated its USP in the media landscape.

Blockchain as an opportunity or a threat?

Dicker said the actual technology of the blockchain is simple, basically a decentralised ledger, but the philosophy of its application is where some of the confusion comes in to play. To understand blockchain and its application, Dicker suggested that the audience conceptualize its development to “the tracks that the trains are going to be built on top of to run. These are the early days of foundational structures that we are going to be able to learn and leverage from and build on top of.”

This is the very early days of blockchain, much like what the Internet might have looked like in 1968, but the industry has the power to start laying the foundations together of what the blockchain media economy could look like – Jarrod Dicker of http://Po.et  #wnc18

Dicker, who was previously the Innovation Chief at The Washington Post, said blockchain can influence and build a better media business. He highlighted the “Napster effect” which famously disrupted the music industry and forcibly pivoted it to streaming, but suggested that publishers should seize the opportunity that blockchain technology and its token economy bring.

Dicker emphasised that “blockchain should not replace journalism” but rather offered it as the technology that could accelerate a change in how the business side of media is managed.

Understanding the implications of blockchain in news media

In his presentation, Dicker offered three practical elements of the blockchain with potential to positively influence the current media landscape.

Where do publishers go from here with the blockchain?

Despite its promise, Dicker was candid in his assessment of how widespread blockchain is in media organisations at the moment: Many discussions are taking place, but there are not so many publishers yet on board. One of the more publicised initiatives is Civil, which announced during Congress that Vivian Schiller is joining its Foundation as CEO, and shortly after Congress that it has launched its first newsrooms.

Unsurprisingly, ad tech companies have been early adopters of the technology because they implement it as an ad fraud controller, he said.

Moser suggested the notion that blockchain could open new business opportunities where traditional monthly subscription plans could be rethought. For example, directly pay the journalist or author. However, it is unlikely that publishers are looking now to overhaul their subscription strategies, but the idea is that they should not be resistant to change looking ahead. “Media companies want to be digital,” Moser said, “but don’t want to disrupt themselves. As long as they try to hold onto the old structure, we won’t see any new business idea, business model or use case based on blockchain.”

While publishers are at the beginning of understanding blockchain’s transformative abilities, there is a lot to learn in this experimental stage. If you’re interested in learning more about this topic then please stay tuned for the upcoming WAN-IFRA Report, “Blockchain in News Media” brought to you by Arcada University of Applied Sciences in Finland and the Global Alliance of Media Innovation (https://media-innovation.news).