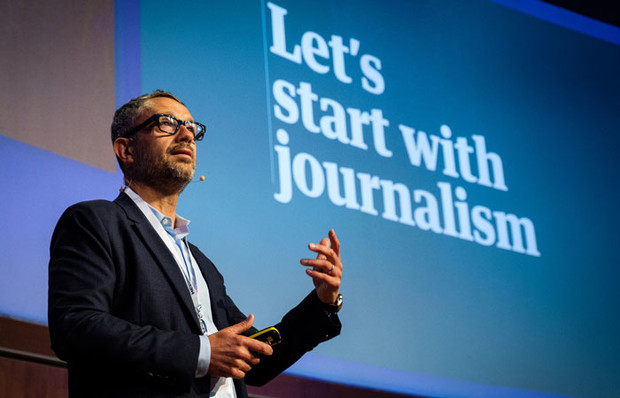 So, how did all this happen?

David Pemsel took over the reins as CEO of Guardian Media Group in July 2015, shortly after Katharine Viner was named the first female Editor-in-Chief. This all came at a time when it looked like the Guardian was on the brink of capsizing.

In a candid presentation at the World News Media Congress in Estoril, Portugal, Pemsel outlined the changes they instituted in order to plug their losses and right the ship.

First, they came up with a clear and concise strategy.

“One of the things that I care passionately about in relation to strategy is that it needs to be simple,” Pemsel said. “How do we condense everything the Guardian does into something that both I can understand and that you can physically see on just one page?”

The strategy outlined the Guardian’s vision and was built on the following four pillars:

“The bounds between a very strong purpose and a very clear financial framework is what led us to the things we’ve been doing over the past three years,” Pemsel said. “And what I’m proud about this chart is that not a single word has changed since 2015. It’s actually been our guiding light over the last few years.”

Getting readers to contribute

While he said they rejected the idea of putting up a paywall because of concerns that it would limit the reach of the Guardian’s journalism, it was essential that they get readers to contribute financially somehow.

“We started off in 2015 using different areas of the site to simply say to people ‘This is the reality and the economics of the news business right now. You’re currently using it for free. We don’t want to tax you for consumption, so would you possibly mind if perhaps just today make a financial contribution to this wonderful journalism that you enjoy?’ ” Pemsel said.

This was a small step, but one that slowly began taking hold and contributions started coming in. Over time, Pemsel said, “we’ve become incredibly sophisticated in how we target reader behaviour and their propensity to contribute.”

Today, there are more than 800,000 people helping to pay for the Guardian’s journalism either as subscribers, members or contributors.

“Our journey over the last three years, particularly the financial part, has changed significantly because of the vested interest our readers have with our journalism. And that contribution model is now a major part of what we do,” – David Pemsel, CEO, Guardian Media Group

Internally, the Guardian also made efforts to control costs, and as with so many other publishers, there were staff cuts in both the UK and US as well.

Investing towards their future

In time, as stability and sustainability increased, Pemsel said they also began to look at how they could better prepare for the future. They launched GMG Ventures with a fund of US$ 50 million and a team that looks to make investments in businesses that can either help to accelerate the Guardian’s own plans, or disrupt them. Pemsel said this means things like AI, voice, advances in Virtual Reality, etc.

“There’s a danger in focusing solely on breaking even that you don’t look around the corner, and Ventures is allowing us to do that,” he said.

Furthermore, he said they are also regularly creating teams within the Guardian to work on a variety of projects across divisions.

The journey to break evenEach quarter, Pemsel said he and Viner “reset the entire business. We use a product methodology called OKRs – Objectives and Key Results. We set the clear target. We put cross-divisional teams together. We give them a focus of what they need to do on the project. And we give them the autonomy to just get on with it.”

He also noted the sound footing on which the Guardian now stands:

“We have no pension deficit. We have no debts. We have a business model that is diversified. We have a unified group of people who not only values journalism but understands the economics of how to fund it. And, I feel we have enough things going on that we are beginning to advance into the next innovation around the corner,”
— David Pemsel, CEO, Guardian Media Group