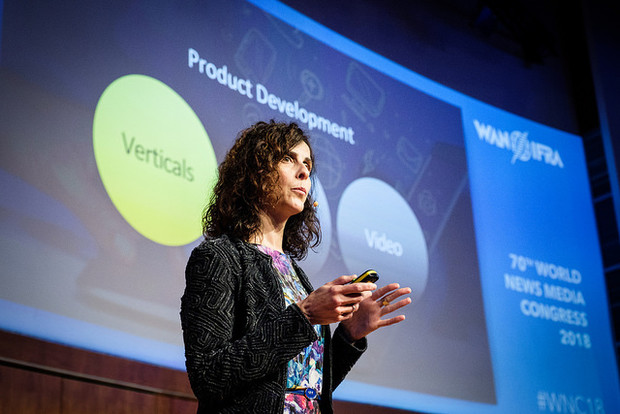 “Our focus in this period has been on gaining scale. This growth could not have been achieved without a clear and determined commitment to our digital transformation,” said Noemí Ramírez, Chief Digital Officer, PRISA News, which owns El País.

So, how have they accomplished this? Speaking at WAN-IFRA’s recent World News Media Congress, Ramírez pointed to four key areas where El País focused its energy:

In addition, a central focal point of their transformation was realised in the opening of a new newsroom, which Ramírez said was designed to be open, structured, technological, global and dynamic.

For example, she said, the newsroom offers open space to facilitate teamwork and collaboration across teams, but it is also structured according to the workflows and the dynamics that are required.

“We re-thought from scratch the way we work and operate within the newsroom.” – Noemí Ramírez, PRISA

The core of the new newsroom is a control and distribution desk that is set up as a command centre from which decisions are made regarding what, when, where and how to distribute El País content across various platforms.

Furthermore, she said the changes in the workflow are visually reinforced in the newsroom with a set of screens that constantly remind editors and reporters about the social trends and social conversations going on as well as displaying the different performance metrics for El País’ and its various products.

A major factor in El País’ growth has been through the use of video, Ramírez said.

“Video has become really key to the way that we tell stories at El País,” she said. “We have moved from being a ‘read’ newspaper to being a ‘watched’ newspaper.”

As recently as 2014, El País had only a few people dedicated to video. Today, however, their video team numbers more than 30 people.

“Video has really had the greatest impact in the organisation as a whole. It has forced us to rethink our workflows, the way we were producing and distributing and equally the commercial strategy.” – Noemí Ramírez

As part of their video strategy, El País has also partnered with YouTube, which Ramírez said is helping to boost their incremental views along with other quantitative metrics.

“We have seen a significant increase in the demographics of our audiences on our YouTube channel,” she said, adding that it is also a new revenue source.

Distribution is the second big driver for El País. Here, Ramírez said, they are looking for a balance between content production and their content distribution strategy.

She added that while they have been seeing growth at all distribution levels, search traffic especially is growing at a fast pace.

“The reason for this, among many different product and technological improvements to the platform, is that we have been part of the pioneer group that developed together with Google the Accelerated Mobile Pages as a way to optimise distribution for mobile devices,” she said.

Likewise, she said El País was an early adopter of Facebook Instant Articles.

“We feel pretty comfortable working with the platforms,” Ramírez said.

“For us, the platforms have become fishing ponds to discover new audiences with whom we can build and engage in a direct relationship.” – Noemí Ramírez

The third part of El País’ digital transformation has been an emphasis on global growth.

“We have an advantage on our side, which is Spanish is a global language, and it is part of the mission of El País to be not only a national newspaper but also a European one and a global one,” Ramírez said.

To this end, El País has bolstered its operations in Latin America, mainly in Mexico and Brazil, using a mix of Spanish and local teams.

“The big challenge for us here is to consolidate our presence globally, and at the same time address the needs of the local audiences, which is not easy,” she said.

Ramírez also explained how data is helping El País to move from an anonymous and free model into exploring one that is based on the insights they gather from their audience.

“It also enables us to move from generated impressions to generated user profiles. From being a general only newspaper to extend and expand our niche offer of products and finally from a product-centric organization to a client-centric organisation, which is an important key for us,” she said.

In terms of audiences, Ramírez said this means moving from reach to loyalty. “We understand that increasing engagement and attention leads to the capture of data and more understanding about what our loyal users want.”

This also helps El País to continue to target and refine their relationship with users and engage with their core audiences in order to retain them. “Ultimately, that creates further revenue and value opportunities,” she said.

At the same time, El País has put a premium on performance.

“Performance is important because it’s actually connected to the user experience,” Ramírez said. “If we are able to reduce latency and reduce page load time, that has an impact in the frequency that users are coming back to us. We are seeing that, and ultimately, that is directly connected to the increase of page views, impressions and engagement metrics as well.”

Next up: Increasing revenues from readers

From a monetisation standpoint, as El País has succeeded in growing its audience, they are now also using data to try to help them increase their revenues. Ramírez said they are doing this in two main ways.

First, they are boosting their programmatic capabilities, especially premium programmatic. And second, they are investigating various reader-revenue models.

“A lot of people ask me why El País isn’t behind a paywall, or have a paid subscription model, and I always say the same thing – ‘Just because we don’t have it doesn’t mean that we won’t have it,’ ” Ramíeriz said.

“We are in this stage where we are testing, and looking at data and what the data is telling us about loyal audiences,” she said.