About a year ago, The Quint launched its fact-checking initiative, WebQoof. (The name is derived from the Hindi word for idiot, “Bewaqoof”, meaning that you’re an idiot if you believe anything on the web without fact-checking first). It’s a newsroom-wide effort, with journalists producing informative articles and videos about spotting ‘fake news’ and working closely with regional and local media and a handful of fact-checking sites to debunk hoaxes and false claims.

The Quint’s readers are encouraged to submit for verification dubious stories they’ve come across on social media. A single such call to action prompted between 100 and 150 submissions.

In India, @TheQuint uses a Whatsapp channel to get alerted on #fakenews by their readers and to publish debunked stories says @kapur_ritu at #WNC18 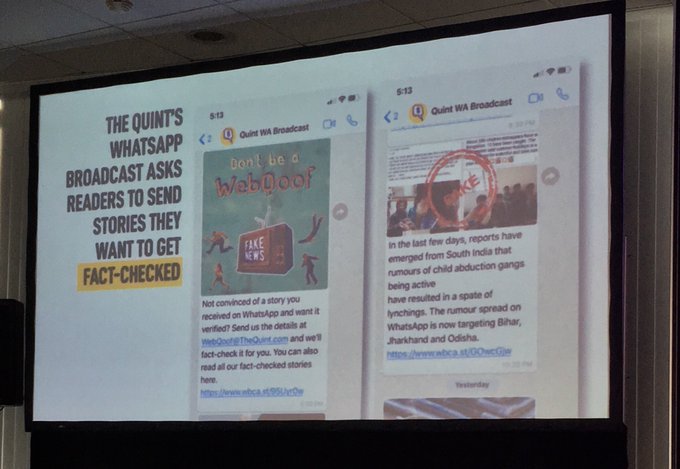 19 people are talking about this

WebQoof is one of The Quint’s fastest growing segments in terms of readership.

“That’s really where the light at the end of the tunnel is for us, because everything you hear is that people are in their filter bubbles, and that they only want to read stories that confirm their biases,” said Ritu Kapur, co-founder and CEO of The Quint, during the World News Media Congress in Portugal.

“But clearly this onslaught of mails that have come to us for verification, and the fact that our fact-checking stories get such high consumption, is very reassuring because it sort of flies in the face of everything we’ve presumed on how people just want to believe fake stories,” Kapur said.

By involving readers in its fact-checking efforts, The Quint has gained access to hundreds of unverified claims on WhatsApp, allowing staffers to fact-check claims that otherwise might have flown under their radar.

“Verified news needs to be as exciting as fake news”

Via its own WhatsApp channel, the outlet feeds many verified stories back onto the platform. “The challenge was how do we make the fact-checked content accessible, because fake news is simple to consume. It travels very easily, whereas fact-checking and truth is more complicated,” Kapur said. “So you’ve got to make the verified news as exciting to read as the viral false news. We’ve been working on that, without in any way taking away from the fact-checking.”

The Quint uses the resource-intensive tactic of dispatching its own journalists to check hoaxes in-person whenever possible, because “nothing works like visual evidence,” Kapur said. She added that this type of content tends to garner “huge traffic.”

For example, a reporter from The Quint visited the Hindu temple near Kathua, where an eight-year-old Muslim girl had been raped and murdered by several men, in order to debunk claims that cast doubt on the events.

“There were claims like, ‘How can a temple be a place of rape for several days when there’s so many people there?’, so we sent a reporter there who walked you visually through the temple, and you saw that it’s not frequented by people,” Kapur said.

The reporter “visually debunked all evidence that seemed to say that there was no rape and there was no murder. And that has been very, very effective,” she said.

Currently, The Quint is preparing for its next challenge: countering the expected spike in misinformation in the run-up to India’s 2019 general election.

“We plan to get more and more people, readers and viewers, actively involved as ‘partners’,” Kapur said. Additionally, The Quint is building out WebQoof on the Hindi site and looking to partner with media organisations to further expand operations.

David Walmsley: ‘Journalism is about having the wherewithal to recognise what you don’t know’