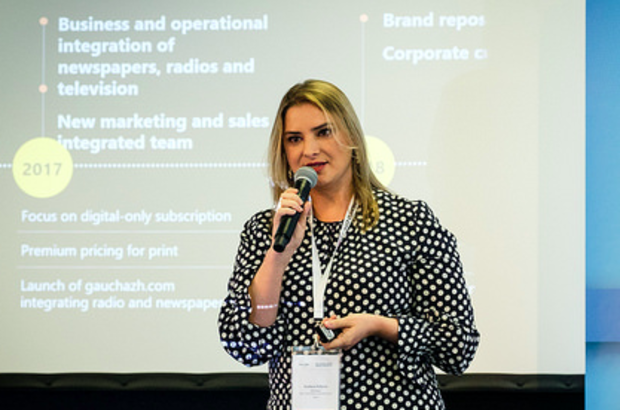 Andiara Petterle of RBS Group, Brazil, speaks at the Media Transformation for Small and Mid-Sized Publishers’ Annual Meeting as part of the 70th World News Media Congress in Estoril, Portugal. Photo by Ricardo Lopes for WAN-IFRA

RBS is one of the largest multi-media groups in Brazil and encompasses news and entertainment channels for TV, radio, digital and newspapers, including three regional and local papers.

Based in the south of the country with a history going back some 60 years, Petterle said RBS’s media outlets reach about 11 million people each month, which is 99 percent of the population in that part of the country.

Facing many of the same challenges as publishers in other parts of the world as well as a difficult national economy, RBS undertook a massive groupwide transformation initiative beginning in 2016 that has seen them merge their main businesses – television, radio and newspapers – sell off five of their eight newspapers and change most of their senior leadership.

“We created a mantra, the first part of which is ‘the right people in the right place’, and we brought in people from different industries, such as a VP of sales from Facebook as well as from Dell and telcos,” Petterle said. “We brought in amazing people. Most of them weren’t from the media business, but people who would ask the right questions and make the company question itself and its processes, and come up with ideas.”

“Second, consumers are our king,” she added. “We began using the design thinking process, especially in our newsrooms, because we have to understand what our audience wants, and what our clients and our advertisers want, and once you start doing that, you can’t stop.”

This has transformed the way they’ve designed their newsrooms as well as how they decide on their portfolio of products, she said.

“We started to do this at RBS in late 2015, and now it’s our only strategy for newspapers. This is the only way that we can see our papers existing in the future and producing professional journalism. And it’s hard, but it’s really worth it,” she said.

“Fourth, we are ‘local for locals,’ so we focus very much on local businesses and local audiences,” Petterle said.

“Three or five years ago we had a broader approach, especially in our newsrooms, but now we really focus on the city and what’s going on across the street,” she said.

The fifth part is an obsession with profit margins.

With this multi-part mantra as a framework, RBS came up with a new strategy and began to deploy it.

Paywall and focus on subscriptions

RBS began in 2016 with new management, Petterle said. “We also started a paywall, totally focused on subscription business, print and digital. We’ve divested, we’ve sold five newspapers. This was something that gave us an opportunity to focus on the brands of the newspapers that we kept. Brand is so important now, especially because of fake news.”

Petterle added that 2017 was a very interesting year for RBS because they had been a multimedia group with television, radio and newspapers that were completely independent. Each business also had its own strategy, management, portfolio as well as its own sales teams.

“They were independent companies with independent cultures, and we’ve integrated our television, newspapers and radio stations starting with the sales and marketing team,” Petterle said. She added this made sense because their advertisers didn’t care if they were divided or united – they just wanted to buy media from RBS.

She stressed that although the integration process was very difficult, it has proven to be well worth it.

RBS also took the step of greatly increasing the prices of their print newspapers because of the expense of producing and delivering them. Despite a steep 25-percent increase, they found their print readers were willing to pay it, so the following year, Petterle says, they increased it again by a similar amount, with the same results.

Next steps and payoff

“In 2018, after we’d gotten the sales integration right, we started another step, brand positioning and culture, so this is the process we are in,” Petterle said.

And their efforts are clearly paying off.

“We ended 2017 with a 19-percent EBITDA margin,” she said. “This year we might be at 21 or 22 percent. Print advertising is declining fast, and now it’s okay because this money is going to radio or televison.”