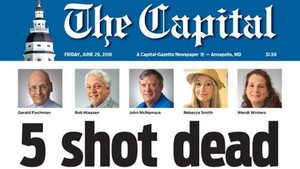 That mystique was shattered Thursday in a hail of bullets through a glass wall in the newsroom of The Capital Gazette in Annapolis, Maryland. Five journalists who minutes earlier felt the quiet safety of their workplace lost their lives as others huddled under desks, in some cases tweeting for help. The shooting suddenly thrust newsrooms into the realm of public schools, nightclubs, concert venues, churches, shopping malls, or post offices; places that previously felt safe before a wave of gun attacks turned them into American killing fields.

It is impossible just hours later to deduce whether the growing chorus of hatred against journalists inspired by President Trump had anything to do with the killer’s fragile mindset when he stole into The Capital building. But the immediate reaction of some newsrooms here in New York to tighten security – including a police presence outside The New York Times – certainly did. As we know from previous shootings across the country, copycat attacks are not only possible, but likely.

Threats against journalists have always been part of the job. Previously consigned to angry letters with cut out magazine words, or anonymous phone calls, threats now come hot and heavy in real-time across social media and email, and in the Trump era through screaming voices at campaign rallies, TV standups, or anywhere journalists are exposed to the public.

At the World Editor’s Forum, a collection of editors from more than 30 countries, we’ve witnessed a shocking rise in the last few years in journalist killings in places like Mexico, Russia, and just a few weeks ago, violence-prone Kashmir, the disputed territory on the India-Pakistan border. Journalists have been shot outside their homes and bombed in their cars. In Mexico City, one newspaper can show several bullet holes in the side of its building. But direct attacks on newsrooms are rare.

One glaring exception was the Charlie Hebdo massacre in Paris in 2015, in which 12 people were killed and 11 injured by Islamic terrorists who stormed the satirical weekly newspaper’s offices. Journalists worldwide linked arms after that attack, but few newsroom managers did much, if anything, to tighten newsroom security. Terrorist attacks still seemed unlikely to most of us at the time. Not so with indiscriminate shootings in America these days, where on any given day an “active shooter” report slices across the wires, and some poor town becomes the new face of American gun tragedy.

Whatever the motivation of the Annapolis killer, the growing worry among U.S. journalists that the drumbeat of name-calling and false accusations by the President might lead to violence has now come true. In a country with more than 300 million guns, use of the term “enemies of the people” is an invitation to violence, no matter who it is directed at.

Sadly, newsroom managers around the country will now begin the process of tightening security and perhaps even initiating training and evacuation procedures for potential shooting scenarios, as many schools routinely do. The concept of the busy newsroom as a safe haven, where war correspondents can return to their desks after weeks on assignment, or photographers can relax after a grueling shift covering fires or other disasters, no longer holds.

In every newsroom I’ve ever worked in, there has always been some sort of informal guessing game about who in the building would be most likely to come in one day and shoot the place up. Now it’s no longer a game. The mystique of the newsroom, one of the few things all journalists have left in common, has been cracked, another victim of senseless gunfire.

David Callaway is CEO of TheStreet, Inc., former editor of USA Today, and the president of the World Editor’s Forum.