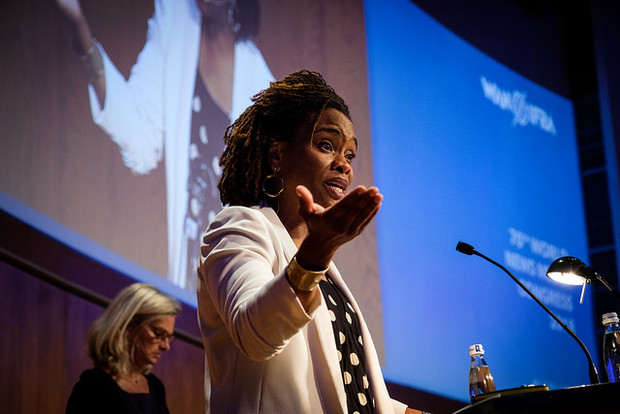 Today, almost 60 percent of their new subscriptions come through The Post‘s website, King said, adding: “I cannot underscore enough how important it is for us to always be testing and understanding what it is that drives new subscriptions on our site.”

During the summer of 2017, The Post announced it had more than 1 million paid subscribers, and that number has continued to climb, King said.

And The Post isn’t just growing its readers in the Washington, D.C., area, but increasingly nationally and internationally as well.

Since at least the Watergate era, The Post has enjoyed an international reputation, but until Amazon founder Jeff Bezos bought the company in 2013, both the paper’s coverage and its audience were largely local.

And it’s clearly working: Today, she said, 93 percent of their subscribers come from outside the Washington, D.C., metro area.

In a wide-ranging presentation full of practical advice during WAN-IFRA’s World News Media Congress in Portugal, King covered such topics as paywalls, moving users towards subscribing, the value of newsletters (they have more than 70!), working with the big tech platforms and making it as easy as possible for people to both buy and renew subscriptions.

Doubling down on core competencies

Across the course of 2018, King said The Post has averaged 88 million unique visitors per month. “This is up 84 percent across the last three years,” she said.

King added that they believe the reason for this growth has been due to their core competencies.

“Really understand what it is that your publication is known for, and where is it that most of your readers find value – double down on that, invest in that area, because that is where you are going to draw in more subscribers. And that is where you are going to engage subscribers when we think about reducing churn and maintaining retention,” – Miki Toliver King, VP Marketing, The Washington Post

For The Post, two of these key areas are politics (naturally!) and opinion.

“Our Opinions content is very much something that our subscribers look to and continue to revisit,” she said.

Likewise, knowing the usage levels of their digital readers is also critical to The Post‘s revenue strategy.

Two more key areas to The Post‘s subscription strategy are working with the tech platforms to reach new potential subscribers and also a diversified newsletter stable.

In terms of working with social media, King says The Post works with several of the major tech platforms, but does so in different ways.

As for the 70 different newsletters varying from parenting to politics, they serve two vital purposes for The Post.

“One, they expose the reader to our content whether or not they come to our site, so that helps us to build a way of communicating with the reader and in some cases reminding them, giving them a brand reminder, when they are not on our site,” King said.

Secondly, she said, the newsletters serve as lead generation tools, which they market and promote on social media channels and by email to registered users. They give readers an opportunity to enroll with The Post without necessarily becoming a paid subscriber. But that means the paper then has an opportunity to be in constant contact with them, and through the articles hopefully puts them on the path to a paid subscription.

Want to find out what works best? Test it

One key area where The Post has done an extensive amount of testing is with its paywall.

“We launched our paywall in 2013 with a meter of 20 pieces of unique content,” King said. “Today, we have a meter of three. We spent a great deal of time in 2017 testing various ways of placing the meter. We were trying to get the meter in the right place and have minimal impact on ad revenue. What we found is that lowering the meter from five to three over the course of the summer of last year allowed us to have minimal impact on revenue from the ad side, and we were able to maximize the number of subscribers that we brought in as a result of hitting the paywall.”

King also stressed the importance of searching for “revenue holes.”

“There were places where we were either not metering content, or we had metered it at some time but they had literally slipped through the cracks of continuing to be metered,” she said.

“As we began to shift our strategy toward increasing reader revenue, one of the things that we had to be focussed on is that every single contact with a reader needs to be part of path to becoming a subscriber. When that becomes the mindset, when that becomes core to the strategy, you begin to look for the holes – for the places where readers can access content without any path to subscription. That became a real focus for us.” – Miki Toliver King

While she said The Post might not have the tightest paywall in the market, they are in a very different place from where they were only 18 months ago, which she said is “because we have looked for those opportunities to put the reader on a path to paid subscription, no matter where they are in their journey with us.”

Making it easy for people to subscribe and renew

In looking at how The Washington Post determines its pricing and transaction strategy, King said this is yet another area where they have undertaken extensive testing to determine the best strategy.

“We have tested pricing quite a bit,” she said. “If you look at major publications in the US, we are, I would say, on the lower end of pricing. And we’re fairly confident in where we are today, and it gives us a huge opportunity for promotions when we need to drive promotions because we’re able to do that around our existing pricing.”

Specifically, she said this confidence in pricing has allowed The Post to eliminate the deep discounts for subscriptions that were typically a part of their marketing strategy a few years ago.

“We found that because we were confident in where our pricing was, we were able to do promotions even around our retail pricing. So, oftentimes the offer wouldn’t necessarily say 50 percent off or 20 percent off. We were able to just send a reminder about The Washington Post subscription and highlight some of our content,” King said. “And as a result, we began pushing more of our retail pricing, so today, less than a third of all our digital subscribers aren’t on a retail rate.”

She said that compares with only three years ago when just over half of The Post‘s digital subscribers were getting discounted rates.

“We are excited about being able to push more of our subscribers into retail rates because our pricing has remained what we believe to be fairly reasonable. And when we do offer promotions, we’re able to do them in a much more strategic way,” she said.

“Again, we’ve been able to do that through a lot of testing. We’ve done a lot of testing around our intro rate. Part of what we wanted to understand was with respect to intro rate pricing: Did we need to offer either a free month, or a month at a dollar? And what we found through all of our research and all of our testing is that intro rate was in fact critical for us, and so that’s something we’ve maintained over time,” – Miki Toliver King

She added that they are now doing testing around their intro prices in international markets with various local currencies.

Relatedly, The Post has also worked hard to make the transaction process for subscribers as easy as possible.

“We’ve tried to create a friction-free payment experience for any potential subscriber who would come to our site. So after the end of last year, we essentially offered every payment method – both on mobile and desktop to any subscriber who comes to our site,” King said.

She said while this did require a lot of time from their tech team to implement, it was important for them to make their platform one that matches the rest of a customer’s online retail experiences.

“It shouldn’t be more difficult to make a subscription purchase than it is for other purchases that people are used to,” – Miki Toliver King

Likewise, The Post has taken steps to make it easier to retain customers by giving subscribers whose credit cards have expired an on-site message with a link to their user profile so they can quickly update their account rather than what they used to do, which was to send them an email asking them to update their account information.

“Again, it sounds like a simple solution, but it has been huge with respect to our retention because what we found is that about a third of our churn was coming from what we like to think of as non-voluntary cancellations,” she said. “These are not subscribers who were actively going in and cancelling, but who ended up lapsing because they had outdated payment information on file with us. So, notifying the subscriber while they are in the reading experience versus sending them an email that gets buried has created a huge change for us. We launched this in mid-2017, and it’s had tremendous impact.”

Next month, WAN-IFRA will be publishing a report on the topic of retention titled “Engaged readers don’t churn – Retention lessons for digital subscriptions.” See the Executive Summary and get more information by clicking here.