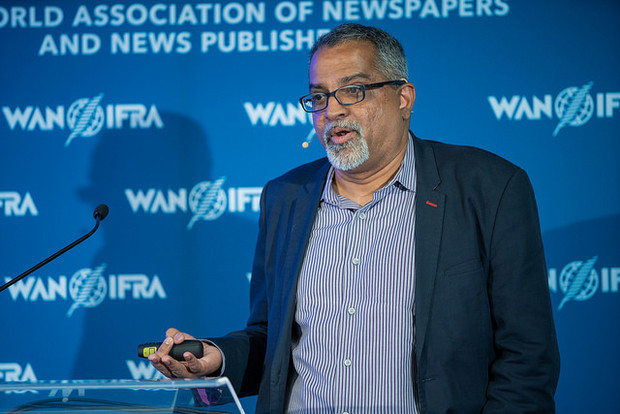 Narisetti, a veteran of News Corp., The Wall Street Journal, and The Washington Post, most recently served as CEO of Gizmodo Media Group, before joining the Columbia Journalism School as Professor of Professional Practice and director of the Knight-Bagehot Fellowship in Economics and Business Journalism earlier this year.

With a career spanning multiple decades, he started out at The Wall Street Journal, and spent the past 10 years working at the intersection of journalism and product, strategy, tech, revenue and innovation.

Among other tasks, he oversaw a significant expansion of Gizmodo Media Group’s audience while acting as CEO, and helped News Corp. diversify and establish itself as a leading digital real-estate listings company while holding the position of senior vice president of strategy.

Ahead of his appearance at Digital Media LATAM 2018, he touches upon the importance of tapping into new revenue streams, shares his advice for managing diversification, and looks back on some of the most interesting projects he came across during his career.

WAN-IFRA: Now that you have had a little bit of time to reflect on the past years, what are the, let’s say, five best ideas or projects from the different companies?

Raju Narisetti: While I have been in this “business” for almost three decades now, the first 20 years were spent in committing acts of journalism and have a lot of fond memories of many stories and journalism projects. In the past decade, I have lived at the intersection of journalism and product, strategy, tech, revenue and innovation, and if I were to only choose five projects from that period, they would be:

1. WSJ.com, for never giving away any journalism for free from the very beginning of the world wide web and sticking to a belief that quality, relevant and useful news and information is worth paying for. People don’t give enough credit to WSJ and Dow Jones for being the sole believer in the dual-revenue model (ads and reader revenue) as publishers embraced digital and switched to just advertising as the revenue model.

2. Mint (www.livemint.com) which I founded in 2007, for redefining ethical, quality, engaging business journalism in India and it’s still (mostly) unique corrections policy, code of conduct and transparency around its journalism practices in a country where ethics and journalism don’t usually go hand-in-hand.

3. The Dayton Daily News where, way back in 1992-93, I launched “The Dayton 100” a database of top private companies/employers in the region, put it on searchable CDs and tried to monetize lists and listicles and databases, well before anyone thought such journalism could be a revenue generator.

4. The Washington Post (2009-2011) where instead of being the usual newsroom naysayer to reducing staff when under revenue pressure, I got ahead and while making difficult cuts, added 100 plus digital roles that have created the enduring foundation of its print and web integration and I dare say, its digital success with the backing of Jeff Bezos today.

5. News Corp., which within its first three years of existence post its split from 21CF, emerged as the world’s largest digital real-estate listings company, adding a critical listings/transactions revenue stream to its advertising and subscriptions business. Today that business is the mainstay of News Corp’s profits and not much credit has gone to what a big bet and a relatively seamless transformation that was for a media holding company.

When you were working at News Corp. and monitoring potential investments in startups, etc., it was in the years when many publishers thought their future would lie in investing in startups…. It did work for Springer, Schibsted or News Corp. but do you still think it was a good diversification for a media company?

Actually, a majority of News Corp investments were not in startups. Its entire digital real-estate investment went into carefully selected companies with a good management (if not profit) track record, firms that were nimble, whether it was Storfyful, Realtor.com or PropTiger in India. Like all diversification plays, some work and some don’t meet your initial expectations, but News Corp today is a much more diversified and healthier company than it was when it was spun-out as a pure publishing and information company. And the fact that we never deployed our resources to double down on print—unlike many of our US publicly traded peers—is also a smart diversification strategy of what “not” to do, something that is under-appreciated.

It’s not necessary to convince you about the necessity of digital paid content, you’ve been working on that a lot over the past years. Can you share quick wins for publishers starting out?

This has been an uphill battle with a lot of years lost in skepticism or believing that only the WSJ and FT (business publications) or the NYT (large national paper) could succeed with reader-revenue. It is very encouraging to see a vast majority of US news organizations go after reader-revenue in some form or the other now. The issue wasn’t whether readers would pay but our own outsized expectations of subscriptions becoming the path to financial salvation. Reader-revenue is just one potential revenue stream from the 10-15 different revenue streams a publisher can have. There is also a lot of good work going on around memberships now, one that offers different and good lessons for newsrooms to try and embrace.

Another area of diversification for publisher is e-commerce. What does it take to be successful at that? Since it isn’t really the culture of news brands….

If a publisher believes that putting “Buy” buttons on their site will turn into an e-commerce business, then they will most definitely be proven wrong. The key to successful content-led-commerce for a publisher is to have transparent, honest conversations around products and provide a service to readers that fits in with the style and ethos of the journalism that audiences come to engage with the news brand in the first place. A great example of such e-commerce conversations is the Kinja deals approach at Gizmodo Media Group, with almost a fourth of total revenue typically coming from affiliate commerce in 2017 when I was CEO.

What’s your advice for managing diversification? What’s the dream team and how is it operated?

A media company can potentially have up to 12-15 revenue streams without moving away from its core. Increasingly a successful digital media company will be one that can accumulate multiple revenue sources. While each of these revenue opportunities has challenges and competition, they will be under stress for different reasons at different times. So it is quite possible to build a sustainable, growing media company than if we still think in terms of just advertising and subscriptions as the only revenue models. I am a believer in entrepreneurial behavior being part of the core than as a separate function even if one needs to make sure to nurture and allow new ventures to thrive within the larger ecosystem.

Regarding your new job, your students will obviously benefit a lot from your experience, but what are you hoping to take away from this new opportunity?

I have a dual appointment. As Director of the Knight-Bagehot Fellowship in Economics and Business, I am responsible for an annual program that brings 10 mid-career business journalists from around the world to Columbia University for a full academic year on a fully funded tuition-waived fellowship (with a $60,000 stipend) to increase their understanding of business, economics, technology and journalism.

I am hoping to help deepen the relationship between the fellows and journalism and also learn from them. As a faculty member, I hope, in time, to be able to help journalists better understand the business of journalism. I intend to stay current by working on consulting projects with media companies as well. So it is both a chance to learn and unlearn, and also help the broader journalism ecosystem get stronger, from arguably the best journalism school in the world at the center of the global media ecosystem that is New York City.

And lastly, have you ever been to Bogota? Are you excited about visiting?

I am really looking forward to Bogota. It is hard not to get excited when you realize you are going to fly into something called the El Dorado International Airport! I hope to get to experience the historical city while also getting a more contemporary understanding of Latin American media trends at the Summit.