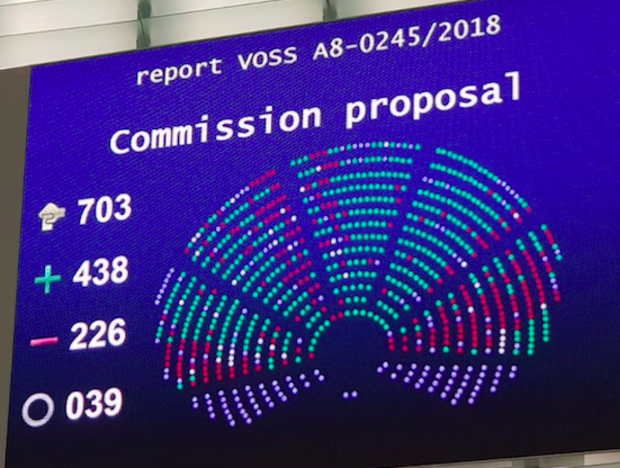 After months of being under the siege of an aggressive lobbying strategy from the big internet platforms, which were main opponents to this piece of legislation, the European Parliament made a wise choice in favour of European creative content.

Below is a thorough analysis from Miruna Herovanu, Public Affairs Advisor for NME. For more on this topic, make sure to also read this interview with WAN-IFRA Board member and ENPA Vice President Valdo Lehari Jr.

In order to understand what this vote actually means, we must go back two years ago when the Commission issued a Proposal for a Directive on Copyright in the Digital Single Market.

In its proposal, two Articles stood out as being set out in order to improve the position of European content producers and creators in the digital world, and the same two Articles ended up being the most contested ones.

Article 11 introduces a neighbouring right for press publishers and Article 13 addresses the so-called ‘value gap’ between content producers and creators, on one side, and distributors of creative content in the digital world, on the other.

Having regard to the nature of our organisation, this note will focus on Article 11 which introduces a neighbouring right for press publishers.

A neighbouring right is a so-called related right, an exclusive right that neighbours the author’s right without bringing any prejudice to the latter.

The neighbouring right protects investment in creative content and it empowers the rightholder to conclude licenses and/or find legal remedies in the case of infringement.

By giving news brands their own legal standing over the fixation of works encompassed in a news publication, publishers would have right to exploit, enforce, transfer or donate their right, a choice that they do not have today.

This measure would come in a time when all content producers: music producers, broadcasters and film producers already enjoy their own legal standing when it comes to creative content they have invested in.

What press publishers seek is to have their own legal standing in relation to the content they produce. This would put press publishers in a better legal position to potentially negotiate licenses with online platforms and aggregators.

As such, the European Commission, on 16 September 2016, published the Copyright in the Digital Single Market Proposal that contains the infamous Article 11 that would provide for a similar legal standing for European press publishers, as that already enjoyed by the other content producers (film, music, broadcasters) for the last decades.

The concept of a neighbouring right is therefore not new, it already exists in European legislation and it seems to be working well for rightholders.

However, in Article 11, the European Commission proposed a more narrow legal instrument for press publishers, especially when compared to other neighbouring rights, in the sense that it covers only digital content and has only a 20 year duration.

The reason why the European Commission proposed the introduction of an exclusive right for press publishers is that in the absence of one, the latter encountered severe obstacles when it came to licensing their digital content.

The difficulty mainly consists in the platforms’ refusal in negotiating licenses with publishers, because while news brands are legally and editorially responsible for the content they produce, they do not have the legal status to show for it.

As a result, in the past decade, press content has been massively reused by third parties without permission or remuneration and without press publishers being able to do much about it.

The proposed instrument would offer news brands their own legal standing and therefore an improved negotiating position with third parties.

It would represent a historical decision of the European institutions that would empower the European news media sector in relation to the distribution of their content in the digital world. It is an opportunity to harmonise the European Copyright regime for the proper functioning of the Digital Single Market.

In the EU, legislation is adopted by codecision between the European Parliament and the Council.

Therefore, the European Commission’s proposal was followed by negotiations within the two EU co-legislators, the European Parliament and the Council, in order to reach their respective positions regarding the Copyright in the Digital Single Market Draft Directive.

The next step is the beginning of the negotiations between the two co-legislators, assisted by the European Commission, which will result in a final Directive, a piece of EU legislation that will indicate Member States the period of time they will have to transpose the Directive into National legislation.

The first of the two co-legislators to reach a general approach was the Council which on 25 May 2018 adopted its official negotiating position.

News Media Europe cautiously welcomed the Council’s text at the time. We welcomed it because it does contain a neighbouring right for press publishers.

However, the text of Article 11 introduces rather complicated criteria, leaving space for Member States to manoeuvre in terms of the implementation of  the neighbouring right for press publishers.

Such criteria could have unwanted effects when the Directive will be transposed in national legislation and will most likely defeat one of the main purposes of the European Commission, which is the harmonisation of copyright legislation across the Union.

In other words, as it stands, the text proposed by the Council would inevitably lead to market fragmentation, that would only benefit third parties that have constructed their business model around press content, without offering any remuneration to content producers.

Therefore, it is crucial that the result of the future negotiations between the Council and the European Parliament provides for a robust and enforceable neighbouring right for press publishers.

The European Parliament’s journey in reaching a compromise on the Copyright in the Digital Single Market Proposal within its political climate was a very long and complicated one.

The moment of the change of Rapporteur coincided with the beginning of a fierce lobbying campaign against Articles 11 and 13 of the Copyright Proposal.

A wide series of myths and false claims bombarded the MEP’s inboxes for one straight year, reaching the high point before the Plenary vote in July.

Although all legitimate concerns raised during the debate were already addressed in the text that was put to vote in July, we sadly witnessed MEPs succumbing to pressures from Silicon Valley by voting down the Report published by the Legal Affairs Committee by a narrow 40 vote majority.

The main reason for the negative result in July was the wide and aggressive propagation of many myths and false claims that have haunted the function of the neighbouring right ever since the discussions began.

For example, it was said that this right will impede users to share links on social media.

The premise of this statement was misleading from the beginning, as press publishers are actively encouraging users to share articles on social media, as sharing gives visibility to their content and increases the highly valued trust relation between the press and its readers.

This myth was addressed by the Council and the European Parliament, which both decided that the right will apply only to information society service providers.

The more dangerous discussion was on the subject of the various criteria related to the limits of the neighbouring right.

What publishers have made very clear during this two year debate is that regardless of the size of the press-publication that is being re-used or scrapped, the investment in content remains the same, therefore all parts of a press publication deserve protection.

This negative vote gave all MEPs – including MEP Axel Voss – a chance to put forward their preferred changes to the Copyright Report (the official negotiating position of the European Parliament with Council).

In an attempt to further clarify and address any remaining concerns, the Rapporteur put forward additional changes to his own Report and, in spite of the fierce campaign against his changes, on 12 September 2018 he managed to secure a comfortable majority and therefore a stable negotiating position with Council.

What is indeed historical about the process around this Proposed legislative measure is that despite the aggressive, intimidating campaign carried by the opponents of the proposed Directive, the simple reality that content producers and creators need to benefit from a stronger legal position prevailed.

On 12 September, European parliamentarians proved that the press still represents one of the fundamental functions of our democracies and voted for fairness in the digital world.

The next negotiating phase of the European Institutions regarding this Directive is set to commence as soon as possible.

The next phase is the so-called “Trilogue” negotiation, a tripartite discussion between the European Commission, the European Parliament and the Council. High-level representatives of all three institutions will now confront the three versions of the Proposed Copyright Directive.

The European Commission now plays a facilitator role, while the main political decisions are left to the co-legislators.

It is perhaps important to note that the European Institutions are reaching the end of their mandate in May 2019, therefore this last step is also very much under time pressure.

This last round of negotiations will probably last until the end of 2018, with a possibility to be prolonged until early next year, when a final text is expected.

This text needs to be officially endorsed by the Council and the European Parliament and if an agreement is reached it will be transposed in a certain time, called an implementation period, into the national legislations of  EU Member States. We can expect the legislation to come into force in the EU by May 2019, and at Member States level around end 2019/ mid 2020.

Another possibility would be that the co-legislators will not reach a workable compromise during the current legislature of the European Parliament.

This would leave the Copyright in the Digital Single Market proposal as legacy to the next European Parliament, that according to its political configuration will decide whether to continue to work on the proposal from its last stage, or to start-over the negotiations, or to just leave the project out of the new political priorities.

This option would represent an enourmous waste of resources and would be a very important missed opportunity for the creative sector and the European institutions.

We certainly do not expect the final stage of the negotiations to be smooth. We expect the abundance of lobbying against both Articles 11 and 13 to continue.

We remain confident that European policy makers, after being bombarded for two years with unfounded myths and alarming stories, will not waste this historical opportunity to secure a sustainable future for the European press sector, by introducing a strong neighbouring right for press publishers that would facilitate the negotiation of licenses with third parties for the unfair reuse of the press content.