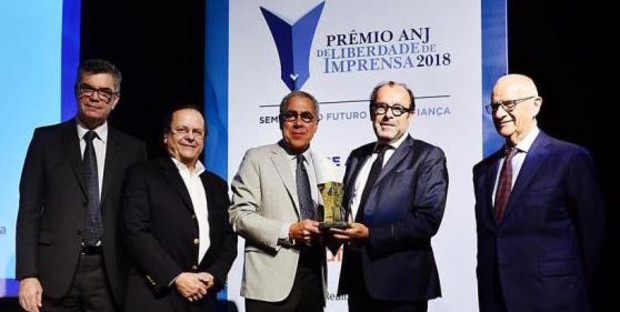 It is an honour to accept this prestigious award on behalf of The World Association of Newspapers and News Publishers. I speak for my colleagues at the association and our members across the globe in appreciation of your recognition of our commitment to press freedom.

I also recognise the good work done here in Brazil by the companies and the brave journalists who make up the Brazilian National Association of Newspapers. We salute you and value the work you do every day.

Let me acknowledge that my comments today come from a largely North American and European perspective. That is my background, my experience.  However, I am convinced that what follows applies here in Brazil, in South America and around the world.

Rarely has there been a time that press freedom has been under such a sustained attack. I believe three forces at work make this a critical time for press freedom and for the core freedoms of our society and its citizens.

The first is the sustained attack by political figures on independent, well-researched journalism in the belief they can substitute a narrative they prefer for the truth.

This, by itself, is truly dangerous and being carried out on a scale not seen since the totalitarian societies in the 1930s and into World War II.

Spokespeople for the President have talked of “alternative facts” and said, “Truth isn’t truth.”  Can you imagine?  That is non-sense.

As you well know, President Trump personally attacks the press almost daily.  He incites political rallies to near the point of violence at every opportunity.  This is increasing as the mid-term elections in the US approach. In a world where threats to civil society are real, he chooses to say the press is the enemy of the American people.

His behaviour encourages politicians across the globe in the same attacks. We must all continue and increase our efforts to present a balanced, accurate view of what is happening in society.

Citizens must be informed by researched, reliable, independent journalism. There are legitimate debates around governmental and corporate policy. But too many political leaders are trying to avoid those debates by creating artificial divisions in society that sow discord and distrust. They do not build consensus.

As members of the press, we well understand our role in holding government and political figures accountable. That means presenting a balanced, fact-based view of the most important issues in government and society broadly.

My colleague, Vincent Peyrègne, spoke this morning about the importance of reconfirming trust in our journalism. It is a critical point.

Trust is vital for the reasons Vincent pointed out. Let me expand on one reason, trust is important because information is now presented in social media without the context that previously came from the newspapers and magazines that one was reading.

Misinformation and lies are not new to media. But in the past most people recognised the properties that invented what they wrote. Today, the information, or disinformation, is dissociated from the organisation that created it. That is a loss to our business and to the service we provide our readers.

The second force I want to talk about that weakens press freedom is this confusion of material our readers and viewers receive that is presented as news.

Social media has enabled the presentation of lies and misinformation to be confused with true journalism. Misinformation is done in some cases by government for the purpose of disruption and distraction targeted within their borders as well as targeted at foreign countries.

Russia is perhaps the most notable example of this. It is also done by individuals simply for the gain of pageviews that can be sold to advertisers. These forces are the enemy of journalism, and it is our responsibility to make sure our readers understand the are at work, and how they work.

The fundamental danger is when lies and misinformation become seen as equal to journalism – as simply a different perspective, as legitimate information.

Our role is to hold the social media accountable for this confusion of journalism with misinformation.

Social media companies say it is difficult to define journalism versus misinformation without weakening free speech. That is true, but difficulty means they must work harder.

We also have to hold government accountable for facing this situation and recognising the danger it poses to our way of life, to our forms of government. We must combat the double speak by social media companies when they select what is presented but say they are not publishers and therefore not responsible.

The third force at work is less visible and harder for our societies to deal with. It is also, in the long run, perhaps the most dangerous.

The founding documents of the United States call out the right to life, liberty and the pursuit of happiness. These concept have resonated across societies and have meaning across the globe.

It is the goal of society to improve the life of its members. Inherent in life, liberty and the pursuit of happiness is the right to conduct one’s life free from unreasonable outside control. Privacy was well understood in the recent past.

Government could not listen to your telephone calls without a court order.  Neither government nor private parties could install listening devices or cameras in your home, on your person or in your car. Who you associate with, who you love, who you cherish is a private matter. Your opinions and your political views are yours to share, if you wish, with whom you wish.

With the advent of smartphone and the amazing technology that comes with it, those boundaries are being eliminated.

A recent opinion column by Sahil Chinoy appeared in The New York Times.  The article presented a number of patents that Facebook has applied for. The ambition shown in these applications is breath-taking. Combined with the realisation of the amount of information being captured by Facebook, Google, YouTube and others, we see a new force at work.

So what patents applications did Chinoy describe? One is to read the location of your smartphone in the middle of the night to determine where you live.  Similarly it can tell when you are traveling and where you are sleeping. When combined across the billions of users of Facebook, it’s easy to build a picture of an individual’s most intimate relationships.

Another discusses predicting your romantic relationships by gathering how often you view another person’s pages, the percentage of friends of a different gender, and examining your profile pictures. Sounds innocent? Imagine if this is combined with search information on “is my spouse cheating” or “signs of depression.”

Yet another describes using your posts and messages to infer personality traits. It describes judging your degree of extroversion, openness or emotional stability and using those characteristics to select news stories or ads to present. This sounds exactly like what Cambridge Analytica did with information pulled from Facebook.

Just two more patent applications I’ll mention. One is to combine the insight gained from examining posts and messages and apps on your phone with credit card transactions and location to predict major life events such as birth, death, graduation.

Lastly, a patent to analyze photos you post at a microscopic level to determine faulty pixels or lens scratches that uniquely identify a phone. This would be used to determine what photos you took and posted versus photos from other cameras, as well as who else uses your camera.

Let me note that Facebook commented in Chinoy’s article that there were no plans to use these patents in their products and some never would be used.  Others say a company’s patent applications are a guide to what they plan to develop.

Facebook has acknowledged that it reads enormous amounts of information from people’s smartphones – what apps they use, how they use them, contacts, and more – even when people have signed out of Facebook or deleted the app. They still read your phone.

This is done without any meaningful consent by users. Most users are unaware of what Facebook is doing, I believe.

This is an invasion of privacy on a scale that was never possible before.

At the same time Mark Zuckerberg apologises for the information Cambridge Analytica was able to gather, his company is filing for patents that gather even more of the same information. This is a fundamental attack on people’s freedom for life, liberty and the pursuit of happiness without being observed and manipulated.

To be clear, I don’t think Facebook is an evil company. However, today technology companies work in a world without boundaries. They marvel at and focus on capabilities they can develop. I ask you to consider a question:  How often does a company have a capability it can use for economic benefit and then not use it?

The smartphone is the most intrusive, revealing device ever invented. And we all carry one.

It is our obligation as journalists to make sure our readers and our governments understand what is being done and what is at stake. This invasion of privacy and extreme observation of individual’s lives combined with inferences of mental attitude and psychological profiles makes the spread of lies and misinformation more effective and broader based.

When the three forces I’ve described combine, whether a conspiracy or not, it is unprecedented. Government attacks the media. Disinformation and lies are presented as equal to well-researched journalism. The presentation is enabled by a psychological profile that predicts interests and susceptibility.

This is a threat to the very core of an informed society making decisions about the future. We have a job in front of us that is as important as it is difficult.

I am proud to be in defense of press freedom and the freedoms of our society with all of you and the global members of WAN-IFRA. Thank you.