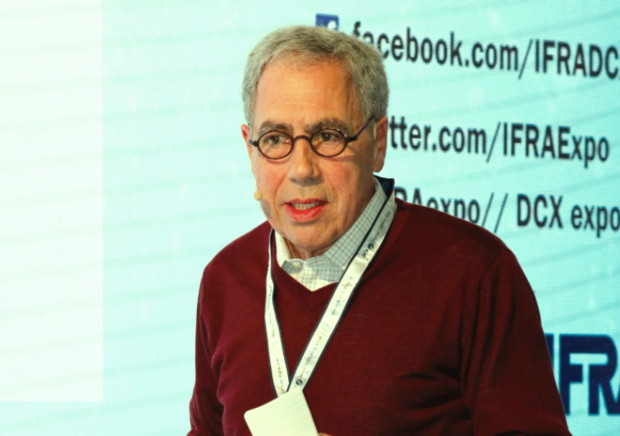 Photo by Christian Laukemper for WAN-IFRA.

“How many users came to our site? How often did they come? How long did they stay, and how deeply did they read into a story? All of that is engagement,” Golden said.

While there is no single formula for good storytelling, he said, great examples abound.

He cited two recent ones, including The New York Times’ 13,000 word story from last week about the background of US President Donald Trump’s fortune, which a team of NYT reporters spent 18 months investigating and took up eight pages in the print issue of the newspaper.

“It was an extraordinary piece of journalism,” Golden said.

“At the same time, because it was 13,000 words and eight pages, the editors knew that some people wouldn’t read it. I learned a new acronym: TL;DR – Too Long; Didn’t Read. So, at the same time that the story went up, they put up a second story ‘11 takeaways from the investigation,’ that walked through in much shorter fashion and highlighted what were the important findings, and you could refer back to the story if you wanted more information, so combining two forms of storytelling at the same time.”

He also described the Brazilian newspaper Folha de Sao Paulo‘s recent online questionnaire where they first got the large number of candidates running for various offices in the country to respond to a variety of questions about the key issues at the centre of their elections as well as the strength of their views on each of them.

The publisher then turned the questionnaire around so that their readers could also fill in how they felt about the issues and whether that issue was very important, important or not so important to them, Golden said.

The reader responses were then matched up against the views of the political candidates and a chart was generated and sent to the responding reader so they could quickly discover which candidates’ views most closely aligned with their own.

“In the first day that it was up, they had 130,000 of their readers fill out this chart and be informed in a new way, and an engaging way, about candidates that believed the same thing they did with the same amount of force behind the belief,” he said.

While good journalistic storytelling is hard, Golden noted that today we have tools to help us to know when and how a story connects with readers.

Questions editors should ask themselves

For example, he said editors need to read the data that digital distribution provides and ask themselves these questions:

“What I’ve just described is relatively easy for me to stand up and say, but it is a ton of work to actually implement,” he added. “So must we do it? Well, I can assure you from what I know of Google and Facebook, they are doing it every day, multiple times a day.”

He noted that Facebook frequently makes changes to what they are trying to accomplish through changing the importance of News on their site, or the importance of Family and Friends, or the way the News Feed looks.

“Why do they do that? Because they believe through their testing and their analysis that it will increase engagement,” Golden said.

“Their goal is to have the most people on the site for the most time, and they are incredibly sophisticated at it. And if we’re going to compete for readers’ time, which we do, we have to be as sophisticated about it.”
– Michael Golden, WAN-IFRA President

However, he added that every publisher doesn’t need to invent their own tools for doing this.

“There are tools available. Google makes some tools that are quite analytical. There are companies out here [at Expo] that have tools to help us analyse the stories. And we have each other to learn from at this conference. But I do believe that being better at our storytelling – being more sophisticated about our storytelling and using data to understand it – is very important to what we have to do in the future.”

The two sides of data

Golden then extended a warning that while data can be our friend, it can also be a potential enemy.

To illustrate this, he described a recent story by Sahil Chinoy in The New York Times about the patents that big tech companies have applied for that can not only allow them to know the location of a smartphone but also predict romantic relationships, use posts and messages to infer personality traits, combine posts, messages and credit card usage to predict major life events as well as to analyse photos microscopically to the pixel level to find small defects, such as a tiny scratch on a lens, that can determine which camera took a photo or given set of photos.

Taken together, this use of data equates to an invasion of privacy on a scale never seen before, Golden said. And that smartphone that we all hold so dear that we keep by us at all times, even next to our beds when we go to sleep and which is always turned on, is actually the best spying device ever devised, he said.

As publishers, he said, it is our duty to make sure that we keep our readers aware of these developments and both the positives and negatives of how data is used in our increasingly digital lives.

You can find video coverage from our events in Berlin by clicking here.

In addition, we are tweeting at NewspaperWorld.

Editor’s note: This post has been updated and expanded since it was first published earlier today.