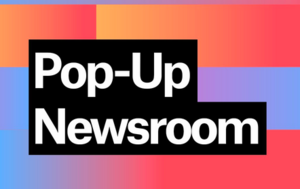 Devised by Bell and San Francisco-based technology company Meedan, Pop-Up Newsroom is a concept focused on collaboration with the aim of fostering newsroom innovation.

Since its launch in June last year, Pop-Up Newsroom has brought together news organisations, journalists, technology companies, and other stakeholders to collaborate on a number of occasions. Initiatives have been launched to cover elections in the UK, to devise ways to track hate crimes on social media for the Documenting Hate project in the US, or to fact-check information produced in the context of elections in Mexico and Sweden.

In this interview, Bell, who will be speaking at WAN-IFRA’s Newsroom Summit in Oslo, taking place October 29 & 30, shares what the different projects have taught him about collaboration.

(The interview has been edited for length and clarity)

WAN-IFRA: What would you say are are the main lessons around collaboration that you’ve taken away from these projects and what were some of the more challenging aspects?

Fergus Bell: The challenging aspect is always getting rivals and competitors to come together on one project. One thing we definitely learned about that process is that involving the stakeholders in the design process keeps you together and keeps people engaged, and they feel like they have a stake and ownership in the outcome.

In Mexico, we really learned the value of a collaborative brand and how to protect that. The day after we announced Verificado [the collaborative election reporting initiative in Mexico], there were fact-checks going out with Verificado logos on it, which had nothing to do with us. As soon as that happened, we started to protect the collaborative project brand and we said, “Okay this project has involved all of these people but you will only see output from this project in these specific places and if you see it anywhere else you should check there. And if you can’t find it in these particular outlets, it’s not genuine.” That really helped to stop the spread of misinformation around the project or people trying to spread misinformation under the branding of the project.

In what other areas do you think it makes sense to launch these collaborative projects?

We are also considering how we might apply it to climate change reporting or the migrant crisis. Really, it’s anywhere where news organisations will be able to do a better job or access more data or have greater capacity by collaborating for a set period of time around a certain subject. The design process itself will be adaptable to anything. We could actually use this to tackle specific technologies around news gathering, and just have a technology pop-up and cover general needs. We can adapt it to whatever is necessary. The mechanism for the designing the project and bringing people together that’s what we’ve been refining rather than the subject area itself.

As long as we can bring the expertise in, we can design a Pop-Up Newsroom around any given subject. I would say that there are some criteria. Those would be a willingness for partners to work together and also to set a clear time limit for a project. If you’re asking competitors to give up a certain amount of rivalry or a certain amount of competitiveness, they need to know that it’s around a specific issue that’s for a set time. Generally, people seem happy to do that if they know that they’re going to get more out of it.

What do participants gain from engaging in these collaborative efforts?

If we do it right they should get out a lot more out of it than they need to put in. In designing these projects, we harness the power of the partnership. To date, those who have got involved have taken a lot more away or have had access to a lot more than they have needed to put in. That’s the primary thing about that. Other things that they can take away is that sometimes, for example, we need to have access to certain technologies, and we work with technology partners or training partners in order to provide whatever we need for the project. This way, people get access to new technologies and they learn how to use them.