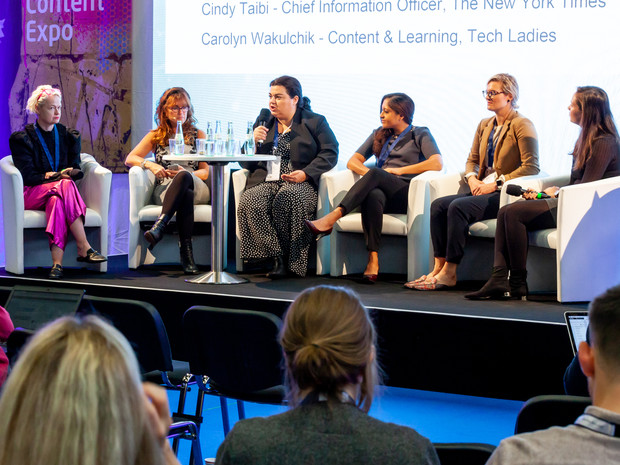 The stark under representation of women in media takes an even darker turn when you look at women in tech in media. Joining Kaur on yesterday’s panel: Fiona Campbell, Director of Digital at BBC News; Carolyn Wakulchik, Content & Learning, Tech Ladies; Ariane Bernard, Chief Digital Officer, Le Parisian; and Cindy Taibi, CIO of The New York Times, who kicked off the session with a presentation about the company’s own initiative.

Here are some of the takeaways from the session.

Making the case for diversity to top leadership

Yes, believe it or not, if you want to create change in your workplace regarding diversity, especially in tech, you will have to make your case to top management.

Taibi and the rest of the panellists emphasised: You have to make the case for both the moral and business imperatives.

“Diversity leads to more innovation, more profitability, and products, but what a lot of people don’t know is that it leads to lower turnover and makes you more successful in recruiting to ultimately be more competitive, particularly in tech,” said Taibi. “Data is critical to get top management on board, to show that this is not just a moral obligation but a business obligation as well. You have to make that case to leadership, but I think that is not difficult in the sense that we all know that there is a lot of hard data and research out there to back that up.”

Kaur at theSkimm is even more blunt: “When a company is only doing this to combat a #MeToo movement, it will die. It has to be a business-driven objective and it has to come from the top. Because what happens is that you have a situation where you are almost doing diversity for charity purposes. And that can create a dangerous situation where you are hiring people only to satisfy a moral obligation, and I think that can become a day-to-day interaction and set in motion an atmosphere that can become very toxic. Like setting diversity quotas without context. … That moral and business objective is so, so imperative.”

Transparency always helps no matter how ugly it may appear, like when the BBC released its gender pay gap in the workplace, particularly around salaries. But the BBC, says Campbell, also used another lever to nudge leadership in the right direction, delving into data that revealed how vastly under represented its female audience was in actual news content.

“My biggest message and takeaway for you all here today, as I presume you have some influence in your company, that it is your duty to use the space that you control to invite other people into those rooms and to have a voice and an influence on those decisions because think of your own family who you will want to eventually have a better workplace. Think of your own company where you want to have a better place to work. You will want to retain the best talent, otherwise in this very competitive landscape, talented people will leave your organisation to go work somewhere that is more exciting. So you have the power to influence the decision-making processes that are going on in this space. Use it.”

While there is a big gap in diversity in tech there is also a gap in networking, says Wakulchik. “We also know that men and those in the majority have an easier time at networking. And networking is a key factor in advancing your career.”

She said there should be enablers to allow better networking – like that at Tech Ladies – particularly to mitigate problems. On the hand, she says, in terms of finding new jobs, Tech Ladies partners with other businesses who are keen to hire diverse staff… her message: if you feel stifled in your workplace, know that you are not alone and that there are other avenues, but also, publishers need to put mechanisms in place to facilitate accessibility to networking.”

Affirmative action is illegal in France creating its own set of challenges for diversity, explained Bernard of Le Parisian. “This left me quite perplexed initially since it would create a more difficult path than, say for example, you might face in America. So this created a challenge in that it put more pressure on individuals on the frontlines of the hiring process to get it right, not necessarily knowing what the goal is broadly concerning diversity.”

Bernard said she had to build a product team this past year from scratch and had to work diligently on job descriptions to weed out some of the language that would help circumvent some of the potential legal issues but also help to attract more diverse talent. She said the French tend to put an over reliance on elite universities in hiring but she believes that type of experience is not absolutely necessary to build a great tech team. Whereas men will easily apply for most jobs that they might not be totally qualified for, she said women won’t. But by reshaping the language in job descriptions, diverse candidates are more likely to apply, thus giving publishers a bigger pipeline of more diverse candidates.

Bernard said that, unfortunately, unpaid internships are still quite prevalent in newsrooms today. “Unpaid internships are a first filter that in itself creates a homogenous group from the very outset, and that sort of locks out people from that part of the world who don’t feel like being a part of what seems like a sort of fraternity.”

Campbell shared how the BBC is taking advantage of a government apprenticeship programme to help nurture young, diverse talent right out of school. “The BBC has a women in leadership programme, a women in tech programme and a news leadership programme, which is for the most young members of staff and we are trying to fast-track them to leadership potential… but we also take the government apprenticeship scheme very seriously. And that is for people who obviously don’t go to university, are straight out of school in the 18- to 19-year-old range. We consciously bring them in big numbers across the whole of BBC. I find that is a great influencer for change because they haven’t had that university tunnel mentality about how to approach a career. And these are people who are already closer to the economic challenges people are facing in the country, and from areas of the country that are perhaps more depressed. So that is a way to tackle this at many different levels.”