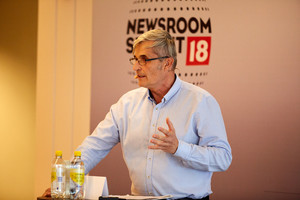 “Since launching the paywall, we have focused mainly on the quality of the content that we publish on our digital platforms,” Kleine Zeitung’s editorial manager Michael Sabath told WAN-IFRA a few weeks after his presentation at Newsroom Summit in Oslo.

“Particularly important was positioning the Kleine Zeitung brand as a digital quality medium and regional go-to destination. We have learned that creating brand awareness among users is crucial in order to be able to monetise content.”

Kleine Zeitung was the first daily newspaper in Austria to introduce a paywall, taking the leap in October 2016 with the launch of a freemium model.

It did so with the luxury of dominating its core markets in Austria, in the southern states of Styria and Carinthia where it has an (overall) subscriber share of 95.6 percent. Kleine Zeitung has a circulation of about 280,000 copies a day, making it the country’s second-largest newspaper, with a portfolio that includes a website, apps, as well as online portals, such as marketplace willhaben.at or review platform gutgemacht.at.

Yet even with that presence and brand awareness, the company knew the paywall brought its share of real risk.

“We were aware from the beginning that launching a paywall would generate massive losses in terms of traffic,” Sabath said.

In fact, visits to all platforms fell to 7 million after introducing the paywall, experiencing the first considerable drop during the pre-paywall phase.

“From the beginning, however, the editorial strategy was focused on showcasing our strength as a prime destination for regional news, local and preferably exclusive, that is,” he said.

Therefore, Kleine Zeitung puts local and exclusive content behind the paywall, while also experimenting with other content offers and formats to attract subscribers, such as livestreams of games from the regional football league or photo galleries of local events.

“About ten percent of those turn into permanent subscribers,” Sabath said.

Subscribers have the option of taking out a trial subscription for two or four weeks, or going straight for a normal digital subscription. Though hard to quantify, around 60 percent of articles are behind the paywall.

Visits have been on the rise over the past couple of years, reaching an all-time high of 14.1 million this year.

Moving to a digital-first mindset

The launch of the paywall was predated by a switch to an integrated editorial office in 2014, merging 174 print editors and 40 digital editors.

“First and foremost, it was about changing the mindset from the familiar routine of ‘print first’ to ‘digital first’, across all departments but especially among newsdesk staff,” he said.

“We tried to create a good mix of specialists from the online editorial department and the other editors across all divisions, powering a mutual learning process from within. In parallel, there have been training sessions to expand the skills of all employees.”

So what are some of Sabath’s other main takeaways and lessons learned?

It’s a continuous process to change mindsets, and working in an integrated editorial setting requires permanent change of organisation. As for the paywall, it serves as an instrument to push the brand, and allows one to gather more and better feedback about user behaviour. And, lastly, for a newspaper like Kleine Zeitung producing local, exclusive content for all platforms is key.