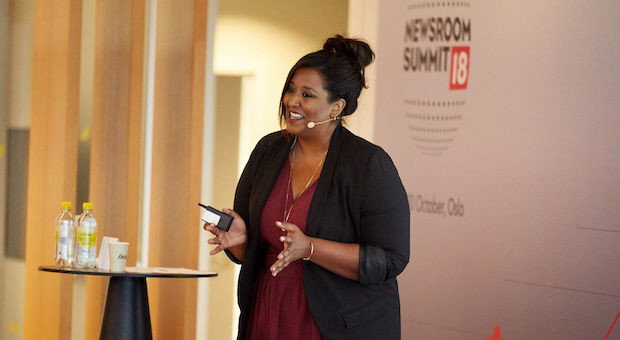 WELT, owned by Axel Springer, first went online in 1995 in a bit of a rogue operation featuring a techy culture editor and an illegal modem shipped from the United States, making it the first German daily with a website. And it blew out 448 page views. Today WELT’s  online presence has grown to five million daily views, but Salah-Eldin says “there were some real lessons learned from that initial launch.”

Now, the outlet is working towards making reader revenue a core part of its business after switching from a metered model to a freemium model two years ago, and is approaching 85,000 digital subscribers.

Salah-Eldin says WELT is laser focused on creating a culture of sustainable innovation, rather than the tempting “lighthouse” or “glitter pony” innovation that might make a few headlines but is fleeting.

So what are some of the key factors that have helped to drive innovation at WELT?

Digital leadership is key to success

Perhaps most crucial for anyone wanting to innovate in a news organisation is having the full support from upper-level management, Salah-Eldin says.

“Our bosses and the editor-in-chief that I report to, they are not some youngsters that just came in from a startup, they have been in the organisation for quite some time,” she says. “But that doesn’t mean that they couldn’t adapt or change.”

For her, being prepared to adapt to a new environment, showing a willingness to experiment, and learn about new tech are all factors that play a key part in driving digital innovation.

“If you don’t have that and you have people that are very rigid and inflexible, and that don’t trust the team, it’s not going to happen for you,” she says.

Salah-Eldin views editorial data analytics as “steering instruments” that ensure the WELT newsroom is data-informed but not data-driven.

“We’re still a journalism operation, so we want to make sure that we have the data but the data is not going to make the calls for us,” she says.

As a way to measure the success of articles, demystify what quality content means for the newsroom, and help journalists improve on their stories, WELT introduced two article scores:  one for free articles and one for premium ones.

“It’s part of a cultural and strategic process to make sure that we are producing the quality content that people not just only want to click but want to engage with, that they not just want to read but eventually are willing to subscribe to,” she said.

Ranging from 0 to 30, the score for free articles is made up of five factors: number of page visits, video content, engagement time, bounce rate, and social media reach. 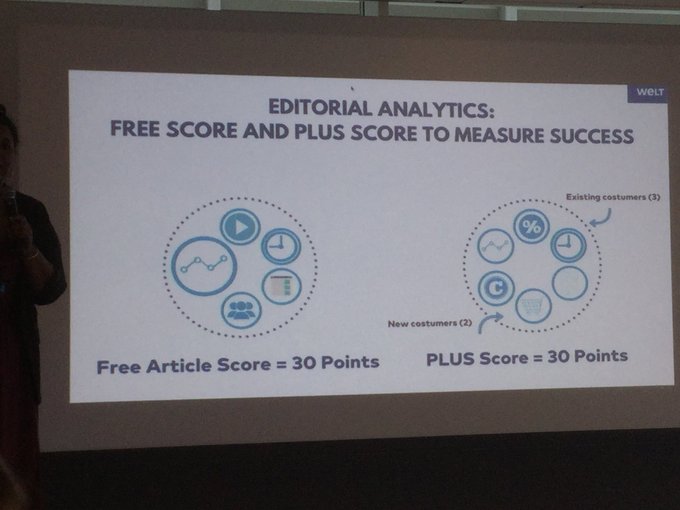 The score for paid articles, on the other hand, takes elements such as page impressions, conversion rate, time spent by subscribers, and exit rate into account.

WELT’s editor-in-chief sends out a daily newsletter, which features the top three articles, but also highlights stories that may not have performed well in terms of KPIs but are considered highly valuable and important to the brand, Salah-Eldin explained.

The importance of introducing bridge roles in news organisations was brought up numerous times during the conference. The people that occupy them tend to work at the intersection of various disciplines, such as editorial, product, or tech, with the goal of breaking down barriers between departments, improving collaboration, and pushing innovation forward.

“You need people who can translate between different worlds,” Salah-Eldin says. “This is very, very essential and you have to make sure that it’s institutionalised.”

At WELT, six editorial and product owners move around in three tandems, acting as “translators” that aim to bridge the gap between the newsroom and the product development side.

“In all we do, we try to move away from the approach of journalism on the one hand and tech on the other hand. We believe that the best products from the user perspective are created when you think journalism and tech together and not as separate entities.”

“Diversity is dear to my heart. I am from the Sudan, not Germany. Gender diversity and more are crucial, but I am talking about diversity in skills, backgrounds and experience. Using the same people, doing the same thing over and over won’t work.” – @Nisalahe of WELT #nrsOslo