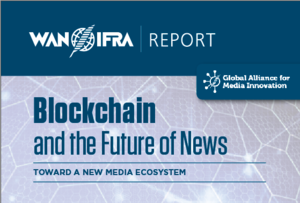 The report, “Blockchain and the Future of News,” highlights many of the main areas where blockchain might make sense for publishers, talking to some of the leading experts, also on the publishing side, working with the technology already. If you are looking for the real innards of blockchain technology, this report is not for you. But if you want practical insights into where this emerging trend stands in publishing and where it might be heading, read on…

The following is an edited excerpt from the report’s introduction, offering insights into the technology and what to find in the report (WAN-IFRA members can download the report here).

‘How dare you say that word…’

Many presentations about blockchain as a tool for publishing are notable for one thing: The presenter is reluctant to explain what it is – and might even try to avoid mentioning the term “blockchain” altogether.

There are two main reasons for that: complexity and image. The principle of blockchain itself is not a simple one, and the cryptography, data structures, and computing routines underlying it are pretty much impenetrable for the layperson. It is an immature technology, evolving at lightning speed in multiple directions at once.

Additionally, blockchain’s image has been seriously damaged by its most famous application, bitcoin. The markets for bitcoin and some other cryptocurrencies are reminiscent of the Wild West, with overnight millionaires and burst bubbles galore. At one point Facebook banned ads for cryptocurrencies (but later partly rescinded its ban). In the past year the price of bitcoin has dropped dramatically, and more than a few analysts predict it will become worthless in the near future.

Blockchain’s usefulness for publishing will survive any such collapse, however, so publishers should not be put off. Naturally, they should remain critical in their assessment. In the words of Dominik Thor, CEO of Vaultitude, a blockchain-based intellectual property protection company: “Many people are trying to apply blockchain to whatever comes to their mind simply because there’s a hype around it. I think you have to think about whether the technology actually brings something to the table and is useful for that kind of industry.”

There appears to be widespread agreement that blockchain is well-suited to intellectual property (IP) protection. The key is the technology’s capability to indisputably record and display the origin and time of publication – and any republication – of any kind of content.

In news publishing, the Associated Press is working with Civil to develop a means of tracking all transactions and allow the AP to enforce its licensing rights (featured in the report). Startups such as Katalysis are using blockchain to help publishers ensure they are compensated for republication of their content (also featured in the report).

Similarly, the accountability and transparency of publishing via blockchain are seen as powerful tools in the campaign to re-establish trust with readers, especially against the background of the garbage masquerading as news content that has overrun the web. Numerous startup news publishing operations, including Civil, emphasise the accountability aspect.

Meanwhile, the permanence of blockchain-based publishing – the fact that a piece of content, once published, cannot be modified or deleted – makes it attractive to investigative reporting sites (see the case of Sludge in the report) and anyone else who is subject to censorship, hacking, or cyberattack. Thus it has value as a tool for preventing governmental or corporate interference in publishing.

Blockchain also is seen as having potential to help publishers realise their old dream of micropayments for content. In fact, “tokenisation” – the (nearly) friction-free exchange of value enabled by blockchain – means news consumers can, in theory, earn credit by contributing anything from constructive comments to fact-checking to viewing ad content. Thus the roles of consumer and provider become blurred. (Tokenisation is running into serious real-world problems at present, as Civil can attest to.)

Many blockchain-based publishing platforms aim to enable individual freelancers, activists, and the like – not “legacy” publishers – to profit from their creative efforts. This disintermediation, this “Uberisation”of publishing, is a development that established publishers might want to keep their eyes on. Threat?

Can publishers and agencies put blockchain to work to help right the sinking ad ship, which is being dragged down by fraud and a lack of reliable statistics? In the second part of this report, Pete Marsh argues they can.

Also in the second part, Peter Zollman describes some of the implications blockchain has for the classified-ad business. Zollman reminds us that taken to its logical conclusion, blockchain’s emphasis on accountability means more than indelibly attaching the name of a person to a piece of online content; it can mean establishing the identity of that person beyond doubt. The implications are far-reaching.

Blockchain can be used to restore trust to the often-rocky relationship among advertisers, publishers, and users, contend Guillaume Vasse of Sud Ouest newspaper in France and Christophe Camborde of its technology partner, inBlocks. Their starting point is storing users’ consent agreements under GDPR, which they see as a springboard to larger projects.

News publishers wanting to “get their feet wet” in blockchain, wishing to explore the technology and what they can do with it without making a large investment or taking a big risk, are offered some advice in the last section of this report.