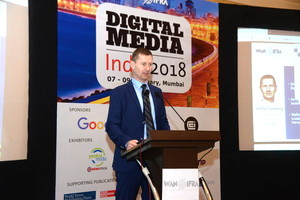 Steffen Damborg, a digital transformation specialist, talks about the status and outlook of how paid content is moving forward, primarily in Europe and North America.

Elsewher The Financial Times has approximately 750,000 paid digital subscribers, while The New York Times already boasts more than 3 million, and The Guardian, is determined to break even this year based on an ongoing campaign for reader revenue that has thus far seen more than 1 million people supporting their journalism through contributions, memberships or subscriptions.

Speaking at the Digital Media India 2018 Conference, Damborg shed light on revenue streams for publishers and how reader revenue has seen a slight growth, while ad spend has plummeted.

Reader revenue in the USA and Europe has grown while ad spend has declined.

“The total growth rate of the publishing industry in the past five years, is at a -2 percent, whereas Facebook and Google are earning market shares. They take 89 percent of new ad spend in the digital space,” Damborg said.

This pattern differs from Asia, which still sees growing circulation.

By 2012, there were more publishers with a digital paywall than ones without one in the USA. Publishers in the European market too are increasingly putting content behind a paywall.

Implementation of a paywall is more dominant in small publishing houses than the big ones. “One does not have to be a big publisher to implement a digital paywall,” Damborg said.

In the USA the metered model dominates, while the majority of European publishers are using the freemium model. The trending paywall model, however, is a hybrid combining metered and freemium.

“Publishers need to rethink their business models. The most intrusive ads are ones that bring in the most money,” Damborg said.

In the aftermath of Facebook’s “show less content from publishers and brands” policy, publishers started noticing a decline in traffic from the social media giant, whereas clicks through Google increased. To combat the lack of traffic, media houses then increasingly began using push notifications.

“We have seen a huge traffic drop from Facebook. Most people have experienced a 30 percent reach drop ever since the social media giant implemented its ‘less content from publishers and brands’ policy, which is not bad because it forces publishers to work with their own brand and platform,” he said.

Facebook is looking to build a local section, which will give publishers an opportunity to be close with resident readers and get new possibilities on Facebook.

Facebook began testing its local news aggregator, ‘Today In’, in 400 small to medium sized cities in the USA in January 2018. With the help of Today In, iOS and Android users opt in to getting their local digests in their feed.

The section officially launched in the USA in November 2018 and also began testing in Australia.

“During Hurricane Florence, 17 first responder pages posted 73 local alerts, providing critical updates to people living in the path of the storm. The City of Charlotte Government is one of our first partners to test local alerts,” Anthea Watson Strong, the Product Manager for Local News and Community Information, said in a press release.

To start charging for content, one needs the right techstack. It takes years to work with technology and implement it correctly to be able for people to purchase paid content.

“When you start working with paid content on digital, you need to consider very seriously what kind of model are you going to choose, what is the frequency of your offering and what incentives are you working with. You also need to have a new go-to market strategy,” he said.

Damborg closed his presentation to by saying that publishers need to start looking at content as “free vs paid” instead of looking at a company as “digital vs print.”