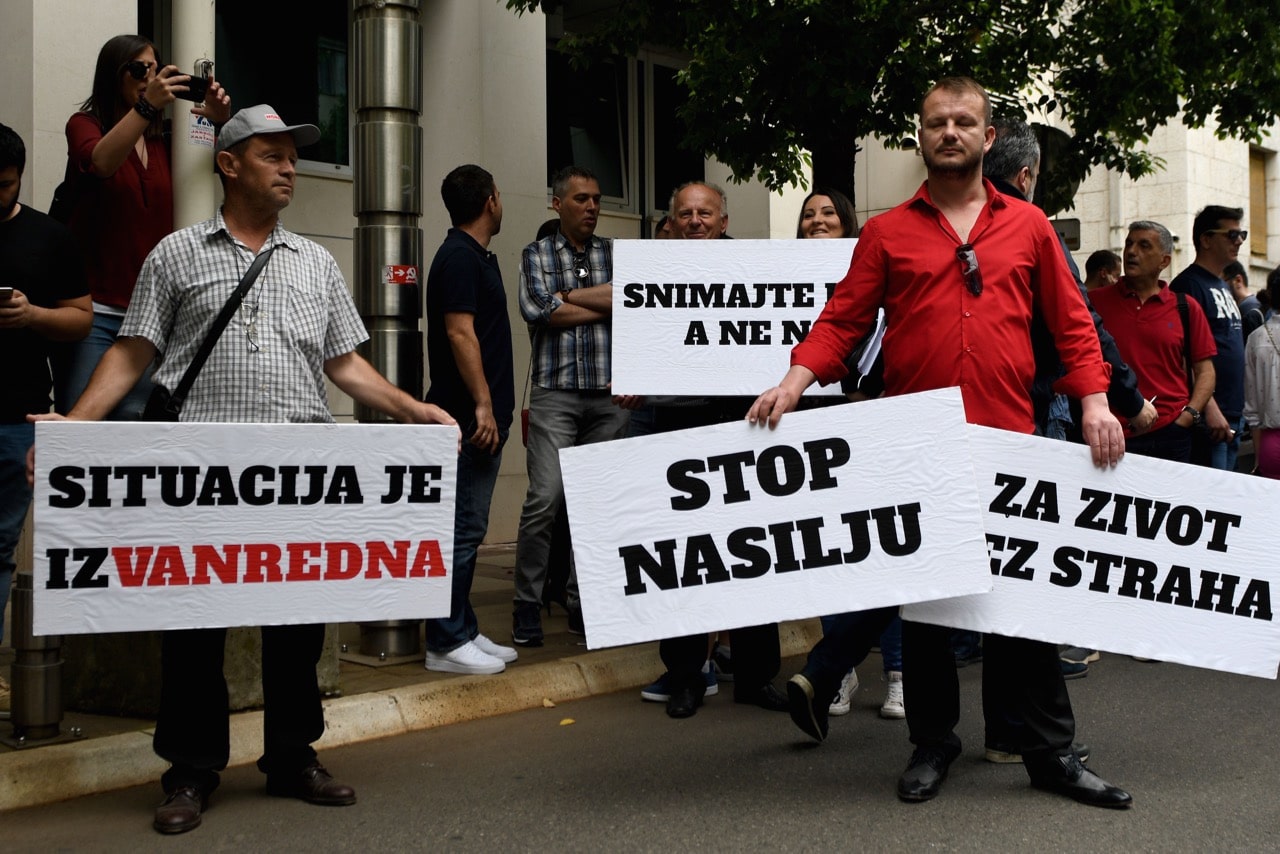 Journalists hold banners that read ‘Stop violence’ and ‘For a life without fear’ during a protest against the attack on Olivera Lakić in Podgorica, Montenegro, 9 May 2018, SAVO PRELEVIC/AFP/Getty Images

His Excellency Milo Djukanovic
President of Montenegro
Podgorica, Montenegro
30 January 2019
Your Excellency,
We are writing on behalf of the World Association of Newspapers and News Publishers (WAN-IFRA) and the World Editors Forum, which represent 18,000 publications, 15,000 online sites and over 3,000 companies in more than 120 countries, to express our serious concern for the safety of journalists in Montenegro.
According to reports, your dispute over a political donation by Dusko Knezevic, a businessman and owner of the Atlas Group, has received widespread media coverage. As the dispute has intensified, so too has criticism of independent media, most recently in articles appearing in government-aligned outlets that describe independent news companies and journalists as members of a ‘media mafia’. As you are aware, for many years this phrase has been used by the government and its supporters to attack independent media and to portray them as criminals acting against the national interest.
We are concerned that such baseless and inflammatory remarks are fostering an environment in which violence against independent journalists is once again becoming more likely. As you will remember, the demonization of independent media in this way preceded the shooting of Vijesti journalist Olivera Lakic last April.
We respectfully remind you that it is the responsibility of the state to provide conditions in which journalists are able to carry out their work free from violence. We respectfully call on you to denounce such provocative rhetoric and to take all possible steps to ensure that all journalists are able to work in a safe and secure environment.
Yours sincerely,
Michael Golden, President World Association of Newspapers and News Publishers
David Callaway, President World Editors Forum

ABOUT WAN-IFRA: WAN-IFRA is the World Association of Newspapers and News Publishers. Its mission is to protect the rights of journalists and publishers across the world to operate free media and provide its members with professional services to help their business prosper in a digital world and perform their crucial role in open societies. With formal representative status at the United Nations, UNESCO and the Council of Europe, it derives its authority from its global network of leading news publishing companies and technology entrepreneurs, and its legitimacy from its 80 national association members representing 18,000 publications in 120 countries. www.wan-ifra.org