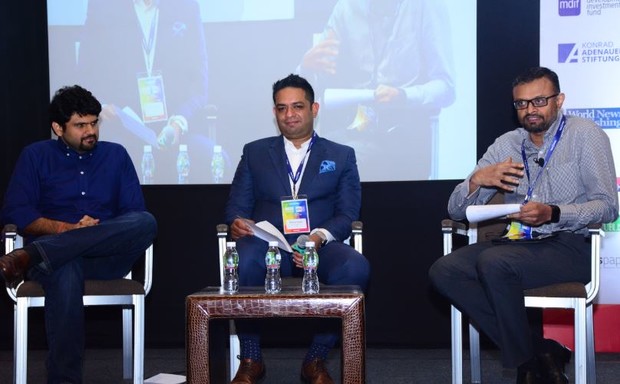 Is it possible for publishers to take a larger share of the revenue pie?

While print media is in better shape in India than it is in many parts of the world, there are increasing headwinds, and the need for publishers to grow their digital revenues is becoming increasingly crucial.

Technology giants such as Facebook and Google dominate the digital advertising space. Apple and Amazon are looking to foray into the news space, which does not leave Paytm and Flipkart far behind in closing in on their share of the advertising pie.

Start-ups have grown aggressively; Daily Hunt, a news aggregator with more than 150 million monthly unique visitors, is attempting to raise $100 million. It is clear that traditional Indian news media faces considerable competition from other platforms and cannot bank on the luxury of print revenues for long.

Outside India, a few brands seem to be riding high on the success of having zeroed in on a three-way approach to revenue.

The New York Times implemented its paywall in 2011. The company clocked an overall revenue of US$ 1.7 billion in 2018, with $709 million coming from reader revenue. The brand, which has branched out into travel, cooking and crosswords, aims to reach $800 million from reader revenue by 2020. Sixty percent of NYT’s revenue now comes from readers, in the form of subscriptions, memberships, events etc.

Axel Springer SE, the largest publishing house in Europe, which owns more than 50 brands in the areas of journalism, classifieds, marketing media, native advertising. Based in Germany, the company is on track to declare revenues of about 3.5 billion euros. Seventy percent of its revenue comes from digital and 85 percent of the digital revenue is from advertising.

The media group’s focus is on journalism but privileges advertising substantially over reader-based revenue.

Naspers, a multinational internet and media group based in South Africa, has journalism at its core but has also built substantial revenue streams focused entirely on digital companies and e-commerce.

Although the company is on track to declare $7.5 billion in revenue, this year, news media represents only about 20 percent of the revenue. The brand invested in Tencent, China in 2011. The stake Naspers bought for just $32 million in 2001 is now worth $175 billion.

The aim of news media in India is to protect journalistic integrity, says Lochan. How do the approaches differ from those used abroad? Here are excerpts from the discussion:

Bharat Gupta: How well we know our audience is where the digital journey begins. Brands need to know how the audience is consuming content and what they want to consume. We need to figure out a path between connecting with readers and offering them content.

It becomes clear through examples of Axel Springer SE and The New York Times, that every brand offers different product propositions – do we want to reach out to a mass audience or establish a niche?

Anant Goenka: Indian news media is letting the wind blow its sails rather than carving its own path. In the long run, a truly sustainable news media set up needs to take the pressure on the business model out of the advertiser to the reader. That is the only way to future-proof oneself.

Indian Express has clocked 130 million unique visitors this year. We are hoping that our investigative journalism sets us apart from other brands and helps in garnering a dedicated audience, who will eventually want to pay for our quality content.

We have a long way to go – in print and digital – in advertising and subscription that we don’t have the mental space for right now. Throwing things at the wall and seeing what sticks is an inefficient approach.

The fact that Apple News has failed twice shows every day journalism is tough. The fact that we have been dealing with journalistic content on a daily basis has created an incredible amount of goodwill and an irreplaceable brand.

Lochan: For The Hindu, digital accounts for less than 5 percent of the total revenue but we run it profitably. What does digital journalism mean for your brand?

Gupta: For Jagran, display advertising accounts for the maximum revenue – about 60 percent. Our focus, right now, needs to be there rather than jumping onto the subscriptions bandwagon.

Digital provides us with about 3 percent revenue, within which we explore the opportunities it presents. Branded content and content to commerce provide us ample room to play with.

The purpose of our content is to generate reach that will be substantiated by advertising. The most exciting about the digital space is that there is nothing right or wrong and one must constantly experiment.

Goenka: Indian Express is shy of 10 percent digital revenue, but it’s a fast growing number. It is too early to dream that it will replace print revenue one day. For content to commerce to be successful, we need to own that particular audience.

I doubt IE could ever compete with a major apparel e-commerce site. BuzzFeed, Vice and Vox got a bit too ambitious, even though their ideas and products were good.

There has to be some reality in your business plans, something the digital world is going to start to feel at some point. One must avoid spending too much money without seeing returns. BuzzFeed’s use of technology is incredible; they perhaps aspired to be at too many places at the same time and could not sustain.

Gupta: Garnering trust is prime. A person who is visiting BuzzFeed knows they are going to see content making them try to buy a product. Over a period of time, the trust will start diluting. It is important to note that the purpose of content cannot be monetisation all the time. We need to graduate loyal users into brand lovers.

Lochan: Will Indian news media in the digital space ever get to know its audience as well as Amazon or Flipkart know their audiences? Or will we limit ourselves to knowing our consumers from a journalism stand point? Simply put, will we ever know our consumers the way advertisers want us to know our consumers?

Goenka: Publishers do four things – create content, sell advertising, distribute, and the fact that they do these three things every day, is the fourth. Since anyone with a smartphone can create content, it’s a terrible business to be in.

Google and Facebook are better at advertising than anyone. Distribution wise, radio, TV and digital all fair better than print ever will. The only thing left is what we do every day – the credibility business, where the barrier to entry is very high, and we have a great head start. As long as we keep at it, advertising will appreciate and respect it.

The purpose of advertising, for over the last 50-70 years, is to make brands more human. When Section 377 was decriminalised in India, a number of brands came out in support.

There is not enough gravitation for language based eCPMs (a metric used to measure a publisher’s ad monetisation performance). Unfortunately, the digital ecosystem is going through what print went through.

It took 70-80 years for print to reach a threshold where it started enjoying advertising rates that were equivalent to the national dailies or English dailies. Digital, which is a much more measurable medium, is going through the same process.