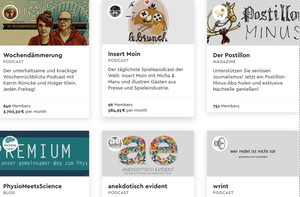 Esser is working to channel that passion into financial health for the membership ecosystem. He shared his ideas, goals, and plans with WAN-IFRA’s Valérie Arnould ahead of his presentation in Glasgow at the World News Media Congress in June.

People become members because they believe they share common obsessions with the individuals behind an online operation, says Esser. He cites what he calls the ‘three Ps’:

“Membership means I ‘do the right thing’ and I get exclusive consideration,” he says. “As a paying member, I consider myself part of a community of like-minded people. I expect open and

Regardless of the passion involved, of course, “You don’t ask someone to marry you on the first date,” or after the first visit to a membership-based site, he adds. His experience at Krautreporter has convinced him that like a digital subscription funnel, a membership funnel is an important concept. The two function quite differently, though. For subscriptions, conversion is often linked to the consumption of articles on a site and associated mechanisms: pricing incentives, features aimed at increasing usage, and so on. Convincing someone to become a member, on the other hand, requires a different kind of understanding of the interaction between a user and a publication.

(For readers unfamiliar with Krautreporter: It is an independent digital magazine launched in Berlin in 2014, funded exclusively by its members and supported by the Krautreporter Cooperative. A detailed description can be found here.)

In the above graphic, Esser has classified media brands according to the emotional engagement of their users and the business model each one uses. He contends that brands in the upper-right quadrant qualify as membership-driven, regardless of whether they label themselves as such. Continuing clockwise: donation-funded free sites, ad-funded operations, and subscription services.

The challenge is to qualify, quantify and channel passion – break it down into identifiable factors and numbers, and develop a conversion strategy.

That’s why Krautreporter applied for and received funding from the newly created Engaged Journalism Accelerator to investigate the process of acquiring new members. Program Director Kathryn Geels says, “The goal is to create a ‘trust funnel’ for membership businesses by using qualitative and quantitative audience data to develop hypotheses on how to build trust, cluster members (i.e. by value or activity), set up a measurement framework, and create engagement activities.” Krautreporter’s team will also work on the retention aspect by “developing KPIs and running A/B tests to uncover what makes its readers happy and how they can be moved up from paying readers to ‘super users’,” said Geels.

Of course, before a blogger, podcaster, small magazine, videographer or software developer (to name just a few examples) can pursue new members, he or she must be able to administer existing memberships efficiently. For that, new skill sets are needed: software development, marketing, accounting, and tax records-keeping. Esser learned that the hard way at Krautreporter.

“When we launched Krautreporter, we quickly encountered problems in managing our member community,” says Esser. “And we saw that we were not the only ones.” As the team developed an effective administrative platform, he said, “Many people who had editorial projects came to us to understand how we operated. But most of them were journalists. All those technical questions scared them, and we didn’t hear from them afterwards.”

But these days he is hearing from plenty of small publishers – current and potential customers of the administration and online payment solution he co-founded in 2017, called Steady. More than 1,500 clients, all of them in Germany, use Steady (the screenshot from the Steady site at the top of this post shows a few of them). “Not all of them make money. Probably 350 of them earn anywhere from small sums up to 10,000 euros per month. That’s a total of 155,000 euros in recurring revenue per month, growing quite rapidly at the moment, probably 5 to 10 percent,” says Esser.

Once a client starts receiving payment from its members, Steady takes a 10-percent commission on the revenue. There is no upfront payment for the implementation.

Steady Media plans to more than triple its current staff of 7 this year to 25 employees. That’s because the young company wants to deploy its platform all over Europe. Esser says he also receives requests “from countries where our solution could help journalists build alternative news voices to government-owned or strongly pro-government media.”