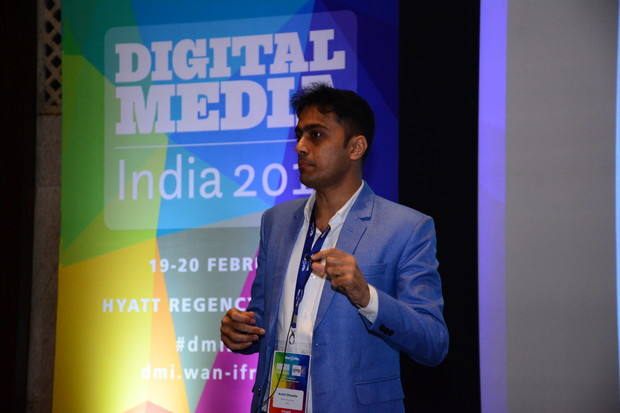 The joint venture was formed in 2016 as it entered an already crowded marketplace, featuring several well-established brands, such as Money Control, which has been around for 20 years; Economic Times; Financial Express, which has shown phenomenal digital growth; and strong editorial brands like Livemint and Business Standard that were already ruling the market.

Ankit Dhadda, Head of Product and Marketing of BloombergQuint, elaborated on the company’s revenue strategies and product growth during WAN-IFRA’s Digital Media India 2019 conference in late February in Mumbai.

In the early stages of the company’s launch, when branded content was not a big play in business news, Dhadda said the company focused on video. Today, BloombergQuint produces 150 pieces of branded video content every year.

“Concentrating on video has given us an edge over pricing. We charge an $8 CPM on our inventory, a fairly large number for an Indian market. Our fill rate is almost 100 percent, month on month.” – Ankit Dhadda

The company was able to achieve this by focusing on building brand perception through high-quality branded content and  loyalty-driven products, which is where WhatsApp comes in.

The Facebook-owned messaging platform has a user base of 250 million in India. In November 2017 BloombergQuint became the first Indian company to launch a WhatsApp news service, delivering (for free) subscribers five pieces of editorially curated content each day.

“WhatsApp is India’s new social media. For a publisher, Facebook, Twitter, Instagram, and Google are crowded and competitive platforms. WhatsApp allows us to reach our user base sans the ad clutter.” – Ankit Dhadda

During the past 15 months, BloombergQuint has garnered more than 400,000 WhatsApp subscribers, who drive some 5 million page views a month, said Dhadda. Crucially, that user base has helped to build an increasing advertising revenue stream.

“We have 3-4 brands associated with us through logo placements within our WhatsaApp service, which has driven a large advertising revenue for us,” Dhadda said. Sponsored messages are not allowed.

Despite that, the brand has capitalised on native advertising, a tool news organisations increasingly need to maintain a steady revenue stream.

The New York Times was one of the first major news publishers to launch into native advertising by creating its T Brand Studio in 2015. Several Indian media companies such as The Indian Express and Hindustan Times have since followed suit.

Even though the plans are priced on the higher side, more than 80 percent of the subscribers came through the WhatsApp service.

“Our loyalists help in contributing to both ad revenue and subscription revenue. We have a high recall among the core audience that BloombergQuint looks at – professionals at senior management level,” said Dhadda.

During the past 20 months, more than 70 clients have partnered with the company on branded content, which serves as a good pedestal for growth.

“This has allowed us to stay away from discounting our pricing and opened up a stream of monetisation that has higher margins and that helps in brand building,” said Dhadda.

The company was also one of the first to foray into the business podcast market with “All You Need To Know.” “We went from a few hundred listeners to over 7000 people who now tune in daily,” said Dhadda.