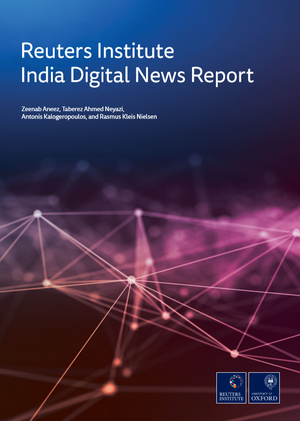 Findings from the report has placed India as a mobile-first news market with smartphones being identified as their primary device for news consumption by an overwhelming 68% of respondents, markedly higher than similar global markets like Brazil and Turkey.

Audiences are largely accessing news via ‘side-doors’ such as search (32%) and social media (24%), rather than going directly to sources of news (18%), the study found.

The first India Digital News Report 2019, published on Monday  with the support of prominent national media groups like The Hindu, Indian Express, The Quint and Press Trust of India, looks at news consumption patterns, trust in the news, media literacy and views on disinformation among India’s English-language news users with internet access.

“Indians are rapidly embracing digital, mobile, and social media, and advertisers are bound to follow. This will be the end of the era in which Indian news media could expect advertising to cover their costs and means that it is critically important that Indian news media develop new, sustainable business models for online news.” – Rasmus Kleis Nielsen, Director of the RISJ and co-author of the report.

Given the large number of population that consumes news in India, this could translate into significant revenue.

“Interesting revelations, especially about 9% of respondents willing to pay for reading news in digital. This augurs well for the news media industry’s future. If one considers 460 million internet users in India, and even a small percentage of them willing to pay for consuming news digitally, news media companies can take a cue from it,” said Magdoom Mohamed, Managing Director, WAN-IFRA, South Asia.

The explosive growth in internet access in India in the last few years has clearly turned out to be a shot in the arm for the digital media consumption and has significantly impacted the nature of public debate in the country.

These shifts are expected to continue impacting the practice of journalism, media organisations and the business of news.

The report also notes that in the run-up to the country’s elections, billed by some as the world’s largest democratic exercise, many are concerned that expressing political viewpoints online could affect how friends or family (49%) and colleagues or acquaintances (50%) see them, with a majority worried that doing so could find them in trouble with the authorities (55%).

The report, which finds overall trust in news (36%) is lower than other comparable markets, points out that a majority (57%) expresses concerns over whether online news is real or fake, with many concerned with hyper partisan content (51%), poor journalism (51%), as well as news that is false (50%).

“Given the massive growth in mobile Internet connections, more Indians are now online, which is going to have important implications for politics as political parties and leaders try to target them through their campaigns.” – Taberez Ahmed-Neyazi , co-author of the report.

Key findings from the study

The report is available here.