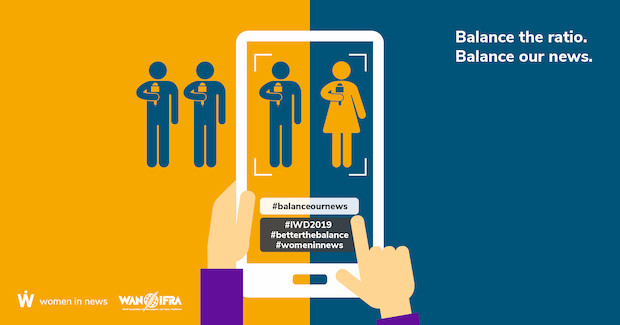 It’s been a big year for gender equality. On the back of social awareness campaigns like the #MeToo movement or Brazil’s #DeixaElaTrabalhar (#LerHerWork), the issue of women’s rights in the workplace has come to the forefront of the news. But gender equality in society only works if the news media follows.

After all, the media is a prism through which society sees itself. It shapes what we think about, what we believe and what we do. So when gender imbalance exists in the news media, these same imbalances often play out in society, leaving room for gender stereotypes, pay gaps and sexual harassment.

According to the 2015 Global Media Monitoring Project (GMMP), the most extensive global report on gender balance in the news, there remain persistent gaps in the portrayal and representation of women in not only traditional media, but also in digital media forms.

Women make up only 24 percent of people heard, read about or seen in newspaper, television, radio and online news. The gender gap is the widest in news about politics and government, where women are the subjects of stories just 16 percent of the time. And just 19 percent of expert sources in news articles are women.

Often, media articles or broadcasts will use outdated gender tropes, portraying women in traditional roles like mothers or homemakers as opposed to CEOs or politicians. Or women may be described as “emotional” or “hysterical,” typecasting them as less successful, educated or authoritative than men, and putting them at an immediate disadvantage.

This negative representation of women in the news ultimately leads to a vicious cycle – the more that women are portrayed as unequal to men in the press, the more they lose confidence in themselves and thus stray away from speaking to the media. In turn, there are fewer women represented in the news.

“Many women are uncomfortable to face the press and feel they would not get a fair report. This fear is well founded,” says Tikhala Chibwana, the Director for Women In News (WIN) Africa, WAN-IFRA’s sector-leading initiative to promote women’s leadership and voices in the news.

“Most of the time when women are covered in the media, it is either because they are victims or they have done something wrong. For that reason many women want to stay clear of the press.”

Other times, external forces are to blame for how often women are used as sources. In the interest of time and ease, a journalist may bypass using a woman source in place of a man.

In the MENA region, women journalists often face safety issues while reporting from conflict zones, or face threats of visibility and harassment when working in highly conservative societies. This can greatly affect how they report on a story and the type of source or content they use.

In the face of such obstacles, news organisations and their partners are increasingly looking toward tools – both high tech and lo-fi – and policy solutions to address the issue of gender imbalance in the news.

The Financial Times created a tracker last November that warned journalists when their articles quoted too many men, and Bloomberg news began using a tool in 2018 that highlights news pieces featuring an interview with a woman. Editors can then use a special tab to tag these stories.

And at the BBC, the 50:50 Challenge has called on all of its channels, as well as participating news organisations across Europe and the US, to make a goal of getting equal amounts of men and women in their news content – from bylines and references to sources and photographs.

For those news organisations who haven’t yet put in place gender trackers, several entities have created online tools to keep the news media in check. In Canada, Informed Opinions’ Gender Gap Tracker uses a slider to allow readers to check how often women and men are used as sources in news content, while Sweden’s Prognosis posts the results of their daily findings of gender balance in the US and Swedish news to their Twitter account.

WAN-IFRA’s WIN programme is preparing to launch a free online app by mid-2019  – the WIN Gender Tracker. It’s being developed as two versions: one for journalists and one for media organisations.

While journalists will be able to run their articles through the app to understand how gender balanced their content is and where to make improvements, media organisations will be able to regularly analyse larger datasets from their digital content and track progress over time.

“This isn’t a public media monitoring exercise,” says WAN-IFRA Media Development Director Melanie Walker. “It is a tool specifically for journalists and media organisations to use internally, to allow them to monitor gender balance in their content so that they understand how to improve it.”

When tools and trackers aren’t an option, there are easy solutions to creating more gender parity in the news. Journalists and editors at Sweden’s VK Media began measuring gender in their content in 2002 using simple counting methods. Since then, the number of women as main characters in their articles has jumped from 23 percent to 49 percent.

Having a firm gender policy from the top down is also key for media organisations so that journalists and editors can then follow suit.

At India’s Mint, a strong ethics policy has ensured that 50 percent of the publication’s journalists are women, including the 16-member leadership team. The editorial team also works to ensure that gender makes its way into content on a regular basis.

A concrete way to create more gender balance in news content is to create a source book for journalists that includes women experts in male-dominated fields, such as politics, business, finance, economics and engineering to improve gender parity in their articles.

And providing training for journalists to be gender balanced in their reporting – through their use of language and subject – is another way to ensure that women’s voices carry as much weight as those of men.

These solutions only work when we as an industry are committed to change. It’s a commitment that has to be across the board – from senior management to junior reporters. With so many tools and resources available, the race to gender equality in the media has indeed begun. But true success will take hard work.

“Freedom of information alongside universal suffrage is the opinion of all in the service of the government of all,” says WAN-IFRA CEO Vincent Peyrègne.

“But what happens when women are underrepresented in the making of news and in the news? We, at WAN-IFRA, believe that this gap and the disparities between men and women within the global news media industry alarmingly undermine the contribution the media can have on democratic development and human rights.”