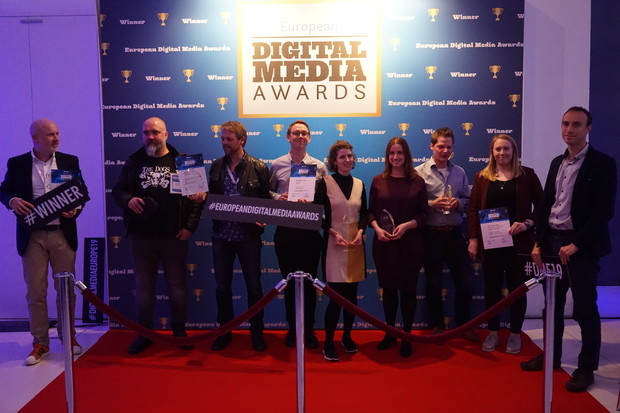 The winners were announced on Monday, 1 April, at the end of the first day of WAN-IFRA’s Digital Media Europe Conference in Vienna.

WAN-IFRA’s Digital Media Awards provide news publishers with regular showcases for the best-practice innovation in digital publishing worldwide. The awards are presented in regions around the world throughout the year.

All regional winners are then automatically entered into the next competition of our World Digital Media Awards, which this year will be announced in Glasgow, Scotland, during our World News Media Congress in June.

The winners of the 12th annual European Digital Media Awards are:

This app from one of Germany’s top publishers learns which topics are interesting to what degree for individual users. “This knowledge in relation to other, comparable users brings the personal gems to the very forefront of the app,” says the FAZ.

Amedia’s live streaming sports service helped the publisher to strengthen their connection with local fans, which in turned provided the company with a new path to subscription growth.

“Bravo! The clear winner in this category,” said one of our judges. “Creating a live sports vertical to drive digital subscriptions is brilliant. It adds tremendous value. Great job.”

VG came up with creative use for advanced facial recognition technology that encouraged users to upload a photo of themselves to discover which of the 736 World Cup football players they looked the most like.

“A very original and effective solution to engage the public and make them participate and share,” said one of our judges. “A magnificent usability and modern and attractive design, a technically sophisticated good project that combines equal parts creativity and efficiency in results.”

“A magnificent example of how to tell a relevant story in a simple and elegant way,” said our judges. “Perfect combination of movement, elementary graphics and number at the service of history and not the other way around.”

The native advertising studio of Croatian publisher 24Sata impressed our judges, with one noting that it offers a “good combination that unites immersive experiences, with editorial expertise and its amplification in networks.”

In creating a marketing campaign to promote the strength of the VG brand and their news coverage, VG decided to make a short film that showed how the publisher would cover the news if the country’s second largest city, Bergen, decided to separate itself from Norway and form its own country. They intentionally exaggerated the storyline and situations so that people would know that it was intended as a satire of Brexit as well as events in Catalonia.

“Very creative campaign, smart!!” noted one of our judges.

The Guardian adopted a reader-funded business model that encourages readers to financially support their journalism. The effort is paying off as the publisher is closing in on break-even and people from around the world are joining up and contributing.

Noted one of our judges: “A reference model that allows users to obtain direct income while maintaining an open model in which quality and respect for users are paramount.”

Euronews created an interactive 360-degree video that offered users ways to discover more about one of France’s largest cities by providing a look at places to see, eat and sleep.

This weekly Instagram feature from The Guardian helps users become familiar with some of the common practices that are used in fake news stories.

“Love this!! Great way to educate younger audiences on fake vs. real news. Well done,” said one of our judges. “This is excellent,” said another. “We have these great tools for communication (social media) and when used to spread good their effect can be incredible. We need more of this and hopefully the example can be followed by other newsrooms.”

See examples from this feature by clicking here.

Namdalsavisa and Nye Namsos created a team of three agents: a policeman, a priest and a bartender, to visit eight different towns throughout Norway within eight days with the goal of Finding the Best of Every Place. Everything was presented live with daily broadcasts on Facebook, which the agents led.

WAN-IFRA’s Digital Media Europe 2019 conference continues on Tuesday in Vienna. Full programme details for the event as well as the list of speakers is available by clicking here.