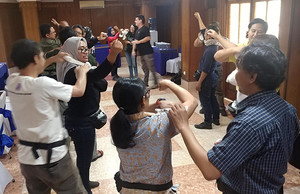 by WAN-IFRA External Contributor info@wan-ifra.org | May 3, 2019

Fira Isrofillah has been a journalist in Indonesia for 15 years. Like many journalists here, she is used to facing demonstrations, violence and natural disasters. Despite having a base of knowledge about how to report in extreme circumstances, she wanted to feel more prepared.

Isrofillah was one of 18 journalists who participated in a safety training held in Bali, Indonesia from 1-3 April to increase their skill set on reporting on everything from natural disasters to digital attacks.

“The training added to my perspective that in order to survive you need to be not only strong mentally but also have a preparation strategy,” says Isrofillah, a freelance journalist for multiple news outlets. “To be a safe journalist is not about being a tough guy, but to be a smart one in any situation.”

Indonesia counts more than 300 different ethnic groups and the archipelago’s location on the Ring of Fire makes it vulnerable to earthquakes, tsunamis, volcanic eruptions and floods. Yet despite the challenges these factors may cause local journalists, most media organisations in Indonesia don’t have a standard operating procedure for reporting on difficult assignments.

The training, held in cooperation between WAN-IFRA and ACOS Alliance, featured trainers Roger Renni and Miles Salom from Key Objectives. The goal was to make editors and journalists more aware of the importance of self-assessment before covering stories affected by natural disaster or other dangers.

“The safety of the journalist is a real priority,” says Adi Marsiela of WAN-IFRA’s Indonesia Media Freedom Committee. “I hope after getting this kind of training, the participants will propose better standards or even better, create a standard operating procedure for their own media organizations.”

The training was especially pertinent for Yinthze Sofline Lingkan, who lives in North Sulawesi, a region prone to volcanoes and earthquakes. In addition to these natural disasters, journalists like Lingkan also face challenges related to ethnic and religious violence.

“I learned many things in this training that I have not gotten in other trainings before,” says Lingkan, a newspaper editor in Manado. “For example, self-defense when covering disasters like floods, earthquakes or volcanic eruptions, as well as public disorder or digital security.”

Isrofillah says that the training was especially helpful for her as a freelance journalist, who must normally navigate the task of safety on her own. Oftentimes, reporting on the ground means being present for demonstrations and riots, which can include tear gas, explosives, police attacks and other threats. While she has been privy to discussions and handbooks related to safety, she says the Bali training went an extra step further.

“I am aware of what to do but I needed more details on how to survive in a given situation,” says Isrofillah. “The training gave me a breakdown of safety procedures, not only how to survive in the moment but also how to plan for emergency exits in advance.”

As journalists left the training, they collectively agreed to spread the information and skills they had learned to their colleagues and media organisations as a whole.