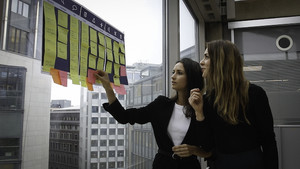 Next Media, a small unit, is essentially Schibsted’s future lab. Its task is simple yet tough: Innovate, grow and operate new initiatives that can become independent media businesses.

“We need to be at the forefront of offering products to our users that help them with the new needs and problems they have,” says Frida Kvarnström, head of Next Media.

But what does that mean? How will Next Media go about finding the media businesses of the future? And how will they measure success?

Part of Schibsted Next

Next Media is part of Schibsted Next, one of the three business areas in the “new” Schibsted (the other two areas are News Media and Marketplaces).

“Our ambition is to find the next generation of media companies for Schibsted,” says Fanny Chays, one of Next Media’s product managers.

Says product lead Tobias Calminder: “We see ourselves as an incubator – a start-up for internal innovation.”

Kvarnström says, “We want to identify the needs of our users and make sure we have products for these needs.”

Most of Next Media grew out of what was previously known as Next Gen. During that process, several projects such as news app Peil and Sports Next were moved out of the unit. It was decided that Next Media should focus primarily on developing new initiatives and business ideas.

Today, the unit has four product and tech teams:

While the Omni Next and Upnext teams concentrate on products that are already in operation, the purpose of the two “lean teams” is to explore bets for new products.

Calminder says Next Media will focus on areas in both the B2B and B2C segments that can expand Schibsted’s portfolio. The goal is that some of the initiatives will succeed in scaling to independent businesses that can stand on their own feet.

But doesn’t a lot of innovation already happen within Schibsted’s existing brands? “Yes, that is true,” says Chays.

“The difference is that we will look at ideas that are outside the scope of the brands so that we can explore new areas for Schibsted.”
– Fanny Chays, one of Next Media’s product managers

A process in four stages

Kvarnström says they are trying to create an environment with a start-up feel – to be good “intrapreneurs” within Schibsted. “This is really about people’s mindsets,” she says.

The first step was to define the innovation process, which follows so-called lean methodology, with small and agile steps of experimentation.

The starting point is the “bet,” a problem area the team believes Schibsted should look into, says Kvarnström.

After the bet is defined, the innovation process follows four steps:

Phase 1: Frame the challenge. In this phase, which typically lasts a couple of weeks, the team tries to define the bet more precisely.

Phase 2: Problem solution fit. The team makes sure the problem actually exists and that they have an real solution to it.

Phase 4: Scale! If successful, the product is scaled.

The process can be stopped in any of the phases if the results are not satisfactory.

And failing is essential to success, according to the team. Kvarnström says they expect to fail a lot and learn a lot. “I hope we will learn from the failures and can share our learnings with the rest of Schibsted,” she says.