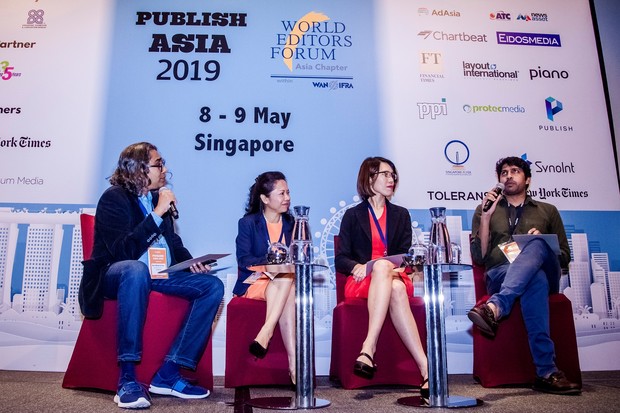 Wijewardene, Head of Digital at ANCL, was speaking during a panel on Events, Experiences & Engagement at WAN-IFRA’s Publish Asia 2019 Conference last week in Singapore.

All three panelists agreed that beyond providing a source of revenue, events serve to connect readers with their publications.

“These things make money, but do they help our publication? Yes – every one of these events is a way of getting more subscribers,” –Savan Wijewardene, Associated Newspapers of Ceylon Limited

Phua added that for The New York Times, events provide an important platform to reinforce and communicate their mission and values to and build trust from their audience.

Wijewardene spoke to the ANCL’s experience of targeting niche markets with events. He explained that the group only began developing an events unit in 2015, and had to identify areas the event market was not already catering to.

Wijewardene then realised ANCL’s minor publications came with highly engaged follower bases, prime for engaging with events. The ANCL decided to revive the Sarasaviya Film Festival, the “Oscars of the local film industry,” which their film publication had discontinued in 2004.

“People thought, you can’t do this. This is a legacy brand, you are not going to succeed in getting engagement. In fact, it was quite the opposite… We had an enormous amount of support from the film community and sponsors,” –Savan Wijewardene

Loh spoke about SPH’s Chinese Media Group’s experience catering to their loyal reader base of Singaporean Chinese readers above the age of 50. Through Corporate Social Responsibility events where the group met with older subscribers, they found these readers faced hurdles in accessing their newspapers online.

Partnering with Samsung, the Chinese Media Group launched a news tablet with no login required and automatic access to e-paper editions of their Chinese news products. “This has turned out to be our best selling consumer product,” said Loh.

For The New York Times, Phua said good speakers were a key to having successful events in larger market where the same talking heads often show up year after year.

For example, when The New York Times launched their Australia Bureau in 2017, they identified the country’s keen interest in food and culture and brought in Food Journalist Sam Sifton for events that drew large audiences.

The speakers also noted that events related to education were particularly successful. Phua highlighted The New York Times Asia-Pacific Writing Competition, where winning essays from students get published in the paper. The competition received more than 900 entries, Phua said.

Loh added that SPH’s Chinese Media Group had also seen success with events related to education, with the National Chinese Challenge, a nationwide Chinese language quiz for Primary and Secondary students, which registered a record number of 1,900 students in 2018.

“There is an infinite demand for education in Asia. It’s hard to go wrong with recognising students’ achievement,” said Wijewardane.

Wijewardane also spoke about the challenges he faced managing between events and the editorial staff, saying, “Basically, journalists are not event planners… I believe you should front your staff for these events, but how do you prevent them from becoming marketing people?”

At ANCL, establishing a dedicated unit to organise events was key, he said.

“At SPH we are very clear that creating quality content and good journalism is core to us. Events are somewhat of an adjacent thing, and they have to serve a purpose,” –Loh Woon Yen, Managing Editor of Singapore Press Holdings (SPH)’s Chinese Media Group

About the author: Alysha Chandra is editor-in-chief of The Octant, the student newspaper at Yale-NUS College.