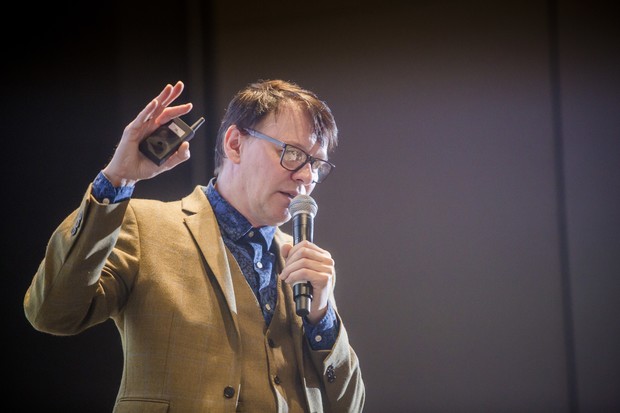 On stage in Singapore: Stig Jakobsen, the Editor-in-Chief and CEO of Norway’s iTromsø, the first newspaper in Europe to try personalisation of the mobile front. Photo by WAN-IFRA

Stig Jakobsen, Editor-in-Chief and CEO of iTromso, the first media website in Europe to implement large-scale personalisation of content on both its website and mobile application, spoke about the challenges of striking the perfect balance between giving readers news towards which they have historically shown an inclination, while still making sure that their ability to develop new areas of interest is not lost.

“The technology, all of the data, was pretty much there. We just had to use it to give the people what they want,” –Stig Jakobsen, iTromso

Jakobsen also took the time to put to rest the rising sentiment that often accompanies technological change: the feared replacement of editors and journalists in the room.

He mentioned the problem of “filter bubbles” that many data-driven news websites face, and showed how algorithmic personalisation of news would run into this problem of repetitive data and lack of a “breaking news” segment quite often, if it is not for the essential task of the editors choosing which stories are vital for consumers to read, and where they should be placed.

“The work was only half done when the story was published,” said Jakobsen, adding that it is up to the editors to use the tools they now have to increase engagement and readership.

When asked how responsive the newsroom has been to these changes in technology, both Jakobsen and Tamilavel – the session’s second speaker who hails from the Singapore Press Holdings’ Tamil Murasu news website – mentioned how it was really up to the management to introduce the changes in a way that involves everyone in a newsroom.

The nervous shift that accompanies any new idea can be softened by explaining how the editors and the journalists would not only have new roles but also will have tools to increase the impact their stories can have.

Tamilavel, who goes by one name, walked through the transformation that the newsroom had undergone in just over two years, expanding beyond a physical newspaper and radio segments to designing a website and a mobile application.

The words of positivity came with a warning for those who were just starting off on this venture of using data and technology in journalism.

Reception from audiences may vastly differ depending on the audiences the material is intended for, and it always takes a few months before the numbers begin to calibrate.

How data can be used in writing articles

The third and final speaker, Yan Naung Oak, Senior Advisor at the Phandeeyar Innovation Lab in Myanmar, brought a fresh perspective to the discussion – taking a few steps back from making data work for the consumers and instead looking at its use to write credible stories.

The population of Myanmar has faced political unrest and widespread clampdowns on free press, but through it all, there are organisations that have chosen to persist and continue providing people with the accurate information they deserve.

Yan’s presentation was well timed on the second day of the conference, one day after two Reuters journalists were freed from Myanmar prisons after being held captive for 500 days; further testament to the difficulties some journalists face in doing their jobs.

Yan felt that now, more than ever, it is important to operate on data-driven journalism, the kind of reporting “whose motives cannot be questioned,” he said. The uptake of data techniques is very different in the newsrooms of Myanmar than in Singapore or Norway.

The dire lack of publicly available data makes it harder for Myanmar newsrooms to produce such labour and skills-intensive stories but through this process, Yan shared a positive message: “At least now we know what doesn’t work,” he said.

Responding to a question about how to get around the red tape and improve the quality of stories, he is confident that data will be more sustainably open once the newsrooms have built ecosystems that support their missions.

He believes mid-level civil servants can provide favourable support. Given their proximity to the top and their own need for independent, informed analysis of issues, providing official data to NGOs and grassroots media would be in their interest.

About the author: Vrinda Sood is a freelance journalist and a Politics, Philosophy and Economics major at Yale-NUS College, Singapore.