For example, just this past week, two ad alliances, which together represent four of Germany’s largest media companies, announced they have joined forces.

Generally speaking, these efforts are manifesting themselves in two main ways, which are sometimes combined. One is through the use of a single-sign-on system whereby a consumer uses one log-in and password to access digital platforms across multiple publishers.

The second is through the creation of advertising alliances where various media partners (sometimes even those that have traditionally been competitors) provide advertisers an easy way to buy targeted advertising across the aligned publishing groups.

WAN-IFRA published a report, and hosted a related webinar, on advertising alliances last year. See details for both at the end of this post.

A session during our recent Digital Media Europe conference in Vienna brought together representatives from four of these initiatives to discuss what they are doing and what they are learning from their experiences.

For example, in Portugal, the Nonio platform was created by the country’s largest media companies and brings together some 70 brands.

“The best thing for us to do to compete [against the major tech platforms] was to get together and make an alliance, a collaborative project where you bring together all these old-school companies, all of them have TV stations, newspapers or radio, and build a platform where we could address advertising, and probably in the future, a paid-content wall,” Mário Matos, a member of the Nonio project’s steering committee, told participants.

In the works for several years, and launched in 2018, Nonio now has more than 1 million registered users, he said.

Portugal has a population of approximately 11 million people. Of those, Matos said 6 million are over the age of 15.

“Our goal is to have half of the population that has access to the internet logged in on our websites,” – Mário Matos, Nonio 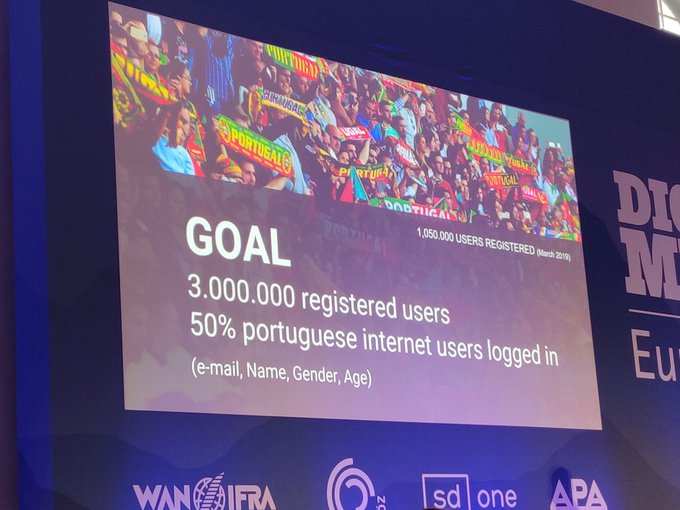 A major reason for this is that it gives the publishers basic first-party data (Nonio users are required to provide their age and gender) that can be used for targeted advertising.

Most targeted advertising is aimed at gender and age

About 80 percent of advertising targeting, even for the major tech platforms, really comes down to just two categories: gender and age, Matos said.

In an effort to increase their levels of logged-in users, Nonio has gated its content since late January.

In late March, they made it mandatory for users to log-in after the second article they accessed.

The journey to get this far has not been an easy one.

“It is complicated when you have 70 different websites, 20 different technologies, sites and apps that were built 10 years ago, and some from this year,” Matos said.

While most of the tech issues have been resolved, Matos acknowledged they are still stuggling with a few things.

In terms of selling advertising through such a platform, one piece of advice he offered was that publishers should not try to sell the same inventory with different teams because that doesn’t work.

“What it does is decrease the price. Even when you put the same inventory on a marketplace. Those guys buying ads from you will say ‘OK, so this is bigger, I’m buying for all of you, I want a lower price than I had before.’ This is the risk. You have to be strong about it.”

Instead, he said, publishers in such an initiative should only sell guaranteed programmatic on their own marketplace where they can set a price and then deliver specific impressions.

Lastly, he stressed how vital it is for the top management of all involved publishers to actively support the project from the beginning in order to get the buy-in from those who will be required to implement it. It has to be made clear to everyone that “This is our survival five years from now,” Matos said.

Another major initiative is the recently launched Ozone Project, which is a joint venture among four of the largest UK publishers: The Guardian, News UK, Telegraph and Reach (formerly known as Trinity Mirror).

“What we are seeing play out is this growing disconnect between publishers’ creation of value and their share of ad revenue. … the reason for this disconnect is intermediary value extraction,” said Danny Spears, the Commercial & Operations Director of Ozone Platform at the Ozone Project, who previously spent 10 years at The Guardian building up their programmatic business.

“The good news is we believe we can do something about it,” he said. “We must pursue greater transparency around data and control of decisioning in order to recreate scarcity around our inventory and audience assets.”

“We believe we must put the consumer at the very forefront of our thinking and which will serve publishers well as first-party to the consumer relationship and as anchor tenants in the matter of consent,” he added. “We must make it easier for the marketer. In short, publishers need to behave more like platforms in offering your audiences at scale.”

The first is called Ozone Publisher Platform, which he said enables programmatic publishers to unlock incremental value in their exisiting advertising business.

“By moving demand integrations off the page, so that’s moving header bidding from a client-side to a server-side setup, we increase publishers connectivity to the market while addressing data leakage. And in doing so, we also give the publisher greater control and improved transparency through business intelligence.”

The second product is called Ozone Audience, and Spears described it as their “brand and buyer-facing proposition that is built on the combined data sets of our publishers, who have a combined reach of 97 percent of UK adults each month.”

“While scale is important, we create most of our value through our data and our approach to audiences,” – Danny Spears, Ozone Project

He said Ozone uses advanced data techniques to build custom audiences for individual marketers that make it relevant to them by using Ozone’s understanding of what the marketer’s “consumers are interested in and what they are actually consuming in real time across our portfolio – we are bringing publisher first-party data to life for the marketer.”

He added that Ozone takes into consideration both the inventory and the data that publishers contribute and the only deduction they make for Ozone Audience is the fee needed to cover the operational costs.

Spears said both of their offerings are underpinned by Ozone’s common ID, “which helps publishers to reduce their dependency on third-party IDs and provides a foundation for match rates and ultimately, monetisation. This is the beating heart of the Ozone proposition.”

“We know that many ad alliances have failed to live up to expectations, and at Ozone, we believe that the publishers alignment around a common framework specifically talks to the ID,” he said.

A WAN-IFRA Report, “Publisher Ad Alliances – Why they make sense and how they work,” was published last year and can be downloaded free of charge by WAN-IFRA Members and purchased by non-members.