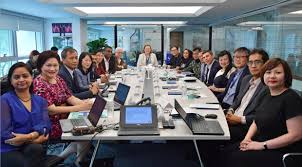 Inaugural meeting of the WEF Asia Chapter, Singapore, 7 May 2019

They met in the newsroom of The Straits Times on Tuesday (07 MAY 2019) to discuss the formation of the group, its goals and objectives, and some areas they might work together on.

Editors agreed that this initiative was timely as newsrooms face many common challenges and need to collaborate to address pressing issues related to:

– Credibility: safeguarding journalists and newsrooms’ freedom to operate and maintain their credibility with readers, who are looking for trusted voices, especially in the wake of the proliferation of fake news;

– Capacity: maintaining and growing newsroom resources to deliver quality journalism, which is resource-intensive and expensive;

To meet these challenges, editors have proposed the following initiatives to kick off their collaborative efforts:

WEF Asia chapter will meet at least twice a year, to review and further these efforts, with the next meeting planned for October, on the sidelines of WAN-IFRA’s Digital Media Asia conference in Hong Kong.

Members of the chapter have elected Warren Fernandez, Editor-in-Chief of Singapore Press Holdings’ English, Malay, Tamil Media Group and Editor of The Straits Times, as the founding chairman of the WEF Asia chapter.

Said Mr Fernandez: “Newsrooms around the world are facing big challenges. These range from the need to transform to being multimedia operations, to maintaining the credibility and quality of our content, in the face of the welter of fake news out there. Quality content, however, takes a lot of resources, so we have to keep our newsrooms financially sound and sustainable if we are to keep going.”

He added: “Some newsrooms are further down the road, and we can all learn from each other. We should also tap the wealth of experience and expertise that is available at WAN-IFRA to help us along.

“So there is a sense that we are all in this together, and so we are minded to collaborate to tackle these common challenges. This is what has brought us all together to form the WEF Asia Chapter.”

Said WAN-IFRA’s Chief Operating Officer Mr Thomas Jacob: “At a time of ‘fake news’ and declining trust, when even reputable media are vilified and discredited by those in power, the need to grow one’s credibility and loyal readership has never been greater. “With 15 of the region’s leading news publishers coming together to share best practices and learn from one another, this will strengthen their capabilities to produce news that serves society and makes a difference.”

About The Straits Times

The Straits Times, the English-language flagship daily of Singapore Press Holdings, is the most-read newspaper in Singapore and is followed widely in the region for its comprehensive multimedia coverage of local, regional and world news, provided by its correspondents in 12 bureaus in major cities worldwide.

Launched on July 15, 1845, The Straits Times has been moving with the times in its efforts to engage and grow its audience and exploring innovative ways of storytelling, as well as continuously refreshing its products to maintain quality and stay relevant to the changing needs of its readers. Its integrated newsroom operates round-the-clock, providing content as it happens on all platforms, from its website at www.straitstimes.com, Apple and Android apps to social media.

The Straits Times is a member of two media networks – the Asia News Network and the Impact Journalism Day alliance of newspapers – and it has won multiple international media awards, including from the Society of Publishers in Asia, the World Association of Newspapers and News Publishers, the Pacific Area Newspaper Publishers’ Association (Panpa), Society of News Design and WAN-IFRA. Its multimedia newsroom and innovative projects were recognised at the annual regional WAN-IFRA event in Hong Kong in November 2018 when it emerged the biggest winner, sweeping nine Asian Digital Media awards, including two golds for best innovation to engage youth audience, and best lifestyle, sports, entertainment website.