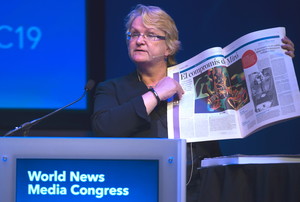 Sabine Sirach (in photo), deputy director of the World Printers Forum within WAN-IFRA, took the stage at WNMC.19 to highlight some of the incredible innovation taking place around print. As she explained: “Print can access all your five senses, and it can connect to digital.”

To illustrate that point she highlighted the work of Jang Media Group around its VR app, which it launched to celebrate the 70-year history of the country of Pakistan: “The Jang Group did this in order to show that newspapers are not threatened by new technologies but can work with them.”

In terms of print innovation specifically, she also cited work done by Diari ARA in Barcelona to create print products unlike anything else on the market, whose tangibility is a key factor in their success. Its comic book and artist-based editions illustrate the news stories in a sequential storytelling format, which work to both tell a news story and to set the edition apart from its competition.

A touchpoint for youths

It is often assumed that younger people are typically more engaged with digital products, and that print falls by the wayside as competition for their time increases. However, one newspaper aimed at teenagers is demonstrating it is possible to buck that trend. Florian Wende is deputy editorial director at Freistunde, a weekly newspaper that has won a number of awards including the Bavarian Print Prize 2018. He believes that young people are far more engaged with social issues than many media companies have assumed – which is supported by the success of The Week Junior in the UK – and that providing a regular touchpoint in print and in person can sustain a youth newspaper:

The staying power of print

Phillip Crawley is the publisher of The Globe & Mail, based in Toronto. The paper is facing the same pressures around falling circulations and advertisers being lured onto other formats as any other print title. He is nonetheless bullish on the staying power of a print brand.

He noted that the Globe & Mail’s position as a privately owned company meant that he could avoid saying the standard lines around the growth in digital subscriptions that publicly-held companies feel compelled to say. Instead, he said, he was happy to share some positive news about a format that many analysts think should be divested:

“Instead I can tell you the truth. Print is profitable. For many decades, newspapers accepted a daily loss because ad revenue paid the bills. Classifieds were, as Roy Thompson said, rivers of gold.

“Five years ago the Globe was losing $25m a year on our print business. Now we’re making a 12% positive margin. Our print subscriptions are worth three times our digital subscriptions,” he said.

While some fairly stringent changes to rates and to the format of the paper have helped cut the paper costs down, Crawley was keen to note that its success in advertising is only possible due to the relationship it enjoys with readers, which in turn is predicated on the strength of its journalism. He noted, “In North America our industry is littered with the wreckage of newspapers” whose owners continued taking costs out without ever re-investing in the journalism.

As a result of The Globe & Mail’s continued investment in journalism, he said, the paper still enjoys a lucrative direct relationship with its readers that, while not stalling the decline in print ad spend, still allows it to be profitable: “Our local regional daily in Toronto, the Star, was down 21% in the last year. We budget every year for a double-digit drop in print advertising. Our CRO has been able to hit his revenue targets in print… it’s the overachiever against budget.”