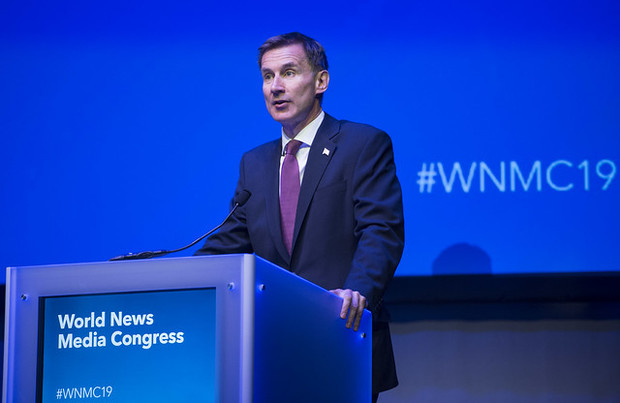 Jeremy Hunt, who is also a candidate to replace Theresa May as the leader of the Tory party and Prime Minister, on stage at WAN-IFRA’s World News Media Congress in Glasgow on Saturday, 1 June. Photo by Neil Hanna for WAN-IFRA.

“If we want to embrace the opportunities of a free society, encourage the open exchange of ideas, pass informed judgement on our leaders and do it peacefully through the ballot box, then we must defend the institution which enables all of this,” Hunt said.

“We must promote a free media not solely for practical reasons but because it’s what we stand for. Democracy and freedom of expression mean nothing unless independent journalists are able to scrutinise the powerful – and discover the stubborn facts – however inconvenient this might sometimes be for the politicians on the receiving end.” –  Jeremy Hunt

Noting that 99 journalists were killed around the world while a further 348 were jailed by governments, he said the April murder of journalist Lyra McKee in Northern Ireland showed that even here in the UK, there is “no cause for complacency.”

Hunt also spotlighted several other attacks on journalists around the world, including Maria Ressa and her team at Rappler in the Philippines, the murder of Jamal Khashoggi, as well as Wa Lone and Kyaw Soe Oo of Reuters, who won the Pulitzer Prize for International Reporting this year while imprisoned and were released in Burma last month.

“We can only hope that the exposure of what happened at Inn Din might serve as an object lesson in the value of determined reporting, the futility of repression – and how international pressure can make a difference,” he said.

“We cannot physically stop journalists from being locked up for doing their jobs. But we can alert global public opinion and make sure the diplomatic price is too high.” – Jeremy Hunt

He also noted that seven of the 10 least corrupt nations in the world, (as ranked by Transparency International) are also to be found in the Press Freedom top 10.

“The evidence is categorical. By serving as a constant deterrent against corruption and misrule, the best journalism helps an economy and helps a society to flourish.” – Jeremy Hunt

The Foreign Secretary also discussed his efforts towards building a coalition of governments for media freedom.

This year, he and Canada’s Minister of Foreign Affairs, Chrystia Freeland, have launched a global campaign for media freedom to “spotlight abuses and raise the cost for those who would harm journalists for doing their jobs,” he said.

“We want to build a coalition of governments committed to a stronger diplomatic response when media freedom is curtailed – and to greater support when countries do the right thing, remove restrictions and push out the frontiers of free expression.” – Jeremy Hunt

In July in London, Hunt said he and Freeland will be co-hosting the world’s first ministerial summit on media freedom, which will bring together foreign ministers, journalists and international organisations.

He added that human rights lawyer Amal Clooney, who also represented the Reuters journalists in Burma, has accepted his invitation to become his Special Envoy, and “is convening a panel of experts to recommend how to improve the legal protection of journalists.”

Futhermore, Hunt described how the British government is working to help build the practical skills of African journalists.

“I’ve created a new Chevening Africa Media Freedom Fellowship, which will allow 60 African journalists over the next 5 years to gain experience in the newsrooms of Britain’s leading media organisations,” – Jeremy Hunt.

Click here to read the full text of Hunt’s speach.