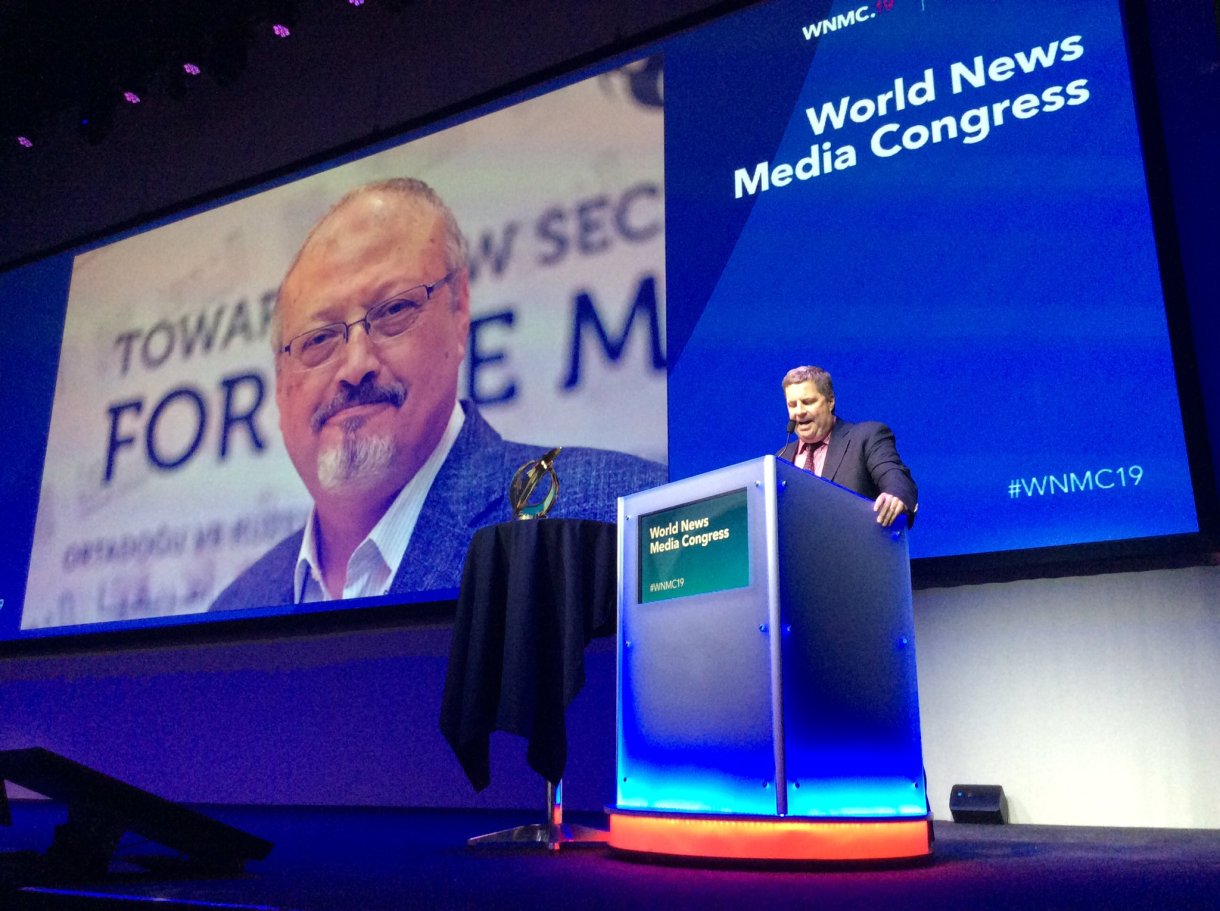 The award, made in Glasgow, Scotland during the 71st World News Media Congress, 26th World Editors Forum and 3rd Women in News Summit, recognised Mr Khashoggi’s long-standing commitment – despite great personal sacrifice and ultimately fatal consequences – to speaking truth to power by exercising his right to freedom of expression through unflinching, quality journalism.

“’When I speak of the fear, intimidation, arrests and public shaming of intellectuals and religious leaders who dare to speak their minds, and then I tell you I’m from Saudi Arabia, are you surprised?’” said Dave Callaway, World Editors Forum president, quoting Mr Khashoggi’s first article for The Washington Post after he went into self-imposed exile in the United States in 2017.

“Despite his enormous love for his homeland, he could not bring himself to ignore where it was going,” continued Mr Callaway. “He continued to speak out, and it cost him his life.”

On 2nd October, 2018 Mr Khashoggi entered the Saudi Arabian consulate in Istanbul, Turkey to collect documents related to his upcoming marriage to his Turkish fiancée, Hatice Cengiz. But he never came out. For the next two weeks, the Saudi government denied any knowledge about Mr Khashoggi’s whereabouts, claiming that he had left the consulate after an hour. Then, on 20th October, state television reported that he had in fact been murdered in an operation ordered by a Saudi intelligence officer. However, conflicting information about his disappearance continued to surface, with differing reports on how Mr Khashoggi had died. More than a month later, Saudi Arabia’s attorney general admitted that he had been given a lethal injection inside the consulate and that his death had been premeditated.

Since Mr Khashoggi’s murder, 11 people have been charged over the journalist’s death, with five facing the death penalty. But a high level of impunity surrounds the case, in which none of those charged have been identified. Despite intelligence reports from multiple global sources supporting the theory of high-level official involvement, Crown Prince Mohammed bin Salman has steadfastly denied any knowledge of the incident.

“Since last October, many of us who knew Jamal have been in a daze. Not able to comprehend what was done to him, why the Saudi government deemed his words so dangerous he had to be brutally murdered. His body disappeared. Just to silence him,” said Saudi journalist and filmmaker, Safa Al Ahmad, who accepted the award in the name of Jamal Khashoggi. “The Saudi government hoped that Jamal’s murder would scare the rest of us. Would silence us. Instead, those who were silent started to speak out. Realizing that their words are powerful, even threatening to this government.”

Since the 1980s, Jamal Khashoggi had been a mainstay in the Saudi and Middle East journalism landscape, with an upbringing that allowed him access to the inner circles of the Saudi royal family. Born in 1958 to a prominent Saudi family, Mr Khashoggi’s grandfather was the doctor to King Abdul Aziz, the founder of Saudi Arabia, while his uncle became a billionaire weapons broker for King Fahd. He was cousin to Dodi Fayed, the partner of Britain’s Princess Diana, when the pair died in a car accident in Paris in 1997. But Mr Khashoggi’s privileged access to Saudi’s ruling elite was coupled with a criticism of that same world, and by the early 2000s he was becoming known for his disapproval of the Saudi government and Saudi-led actions. Until then, he had held positions at several Saudi publications, including as managing editor and acting editor-in-chief of Al Madina from 1991 to 1999. Throughout the 1990s, he was known for his coverage of the Afghan War, where he met the late al-Qaeda leader, Osama bin Laden.

Mr Khashoggi went on to take the position of deputy-editor in chief of Arab News in 1999 and in 2003 was named editor-in-chief of Al-Watan newspaper. However, this position lasted only two months before he was dismissed for publishing a column criticizing the kingdom’s religious police. The incident was the start of his reputation in the West as a liberal progressive. He then worked as a media advisor to Prince Turki al-Faisal, the former Saudi intelligence chief, who served as the Saudi ambassador to the UK and the US. Mr Khashoggi returned as editor of Al-Watan in 2007, but his second tenure lasted only three years after he resigned under pressure following the publication of an op-ed criticizing Salafism.

In 2015, Mr Khashoggi was named the head of a new television channel owned by Prince Alwaleed bin Talal and operated out of Bahrain. But, within one day, the channel was shut down after it aired an interview with a Bahraini opposition figure. Mr Khashoggi soon became a frequent contributor to Saudi and international TV channels such as the BBC, Al Jazeera and Dubai TV. He regularly published opinion columns on Al Arabiya. In 2017, Mr Khashoggi went into self-imposed exile in the US, after revealing that he had been “ordered to shut up.” He soon became a regular columnist for The Washington Post and, in the years that followed right up until his death in October 2018, he continued to be a vocal critic of the Saudi government – albeit from distance.

Globally, nine out of ten journalist murders go unsolved, with neither perpetrators nor those who order the killings being held accountable for their actions. Despite the international criticism Saudi Arabia faced following Mr Khashoggi’s murder, authorities continue to detain peaceful activists and dissidents for long periods without trial, according to Human Rights Watch.

Saudi Arabia does not allow any independent media. The number of journalists and citizen-journalists in detention has tripled since the start of 2017, according to Reporters Without Borders, with most held arbitrarily and likely facing torture. Journalists who voice criticism or analyse political problems risk being fired or detained under criminal code provisions or under terrorism or cybercrime laws.

“We stand for a united effort among the global media to hold tyrants and governments accountable for their actions to suppress free speech and inhibit the growth of free societies for all their people,” said Mr Callaway. “It is an uphill battle. Our enemies seek to divide us. Our leaders ignore the jailings, shootings, and intimidation. Only by all of us working together can we protect our journalists, and by extension, our freedom. Jamal Khashoggi understood this. He knew he was in danger but he would not be silent. His homeland meant too much to him. He cannot be here with us. But I’m proud today to honour the late Jamal Khashoggi, a courageous man, Saudi Arabian, and journalist.”

“Jamal’s death goes unpunished,” concluded Ms Al Ahmad. “The devastating war on Yemen continues. And we are left alone. Speaking our truth to power. Wondering which one of us will be the next to be disappeared. Tortured. Killed.”

ABOUT THE GOLDEN PEN OF FREEDOM

The first Golden Pen of Freedom was awarded in 1961. This year’s award to Jamal Khashoggi is only the third occasion that the Pen has been given posthumously; Claude Bellanger (1979) and Naji al-Ali (1988) were also awarded after their deaths.